Nov 1, 2016 8:41 AM PHT
Paterno Esmaquel II
Facebook Twitter Copy URL
Copied
'We did not get an explanation as to why the letter took a month to reach the OHCHR in Geneva,' UN rapporteur Agnes Callamard tells Rappler 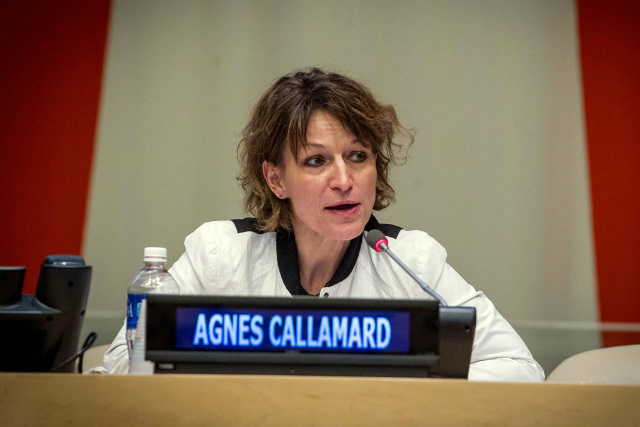 MANILA, Philippines – United Nations special rapporteur Agnes Callamard said she has finally received the Philippine government’s invitation to probe extrajudicial killings in the country, nearly a month after the government supposedly sent it.

Callamard is the UN’s special rapporteur on extrajudicial executions, connected with the Office of the United Nations High Commissioner for Human Rights (OHCHR).

In an email to Rappler at around 10 pm on Monday, October 31, Callamard said she received Philippine President Rodrigo Duterte’s invitation on October 24.

This is nearly a month after Executive Secretary Salvador Medialdea signed it on September 26.

The Palace released the letter on September 28, and sent it to reporters on October 12.

On why she received the letter almost a month after it was sent, Callamard said, “We did not get an explanation as to why the letter took a month to reach the OHCHR in Geneva.”

In any case, she said, “We have now begun the process of negotiating the scope and guarantees for the mission to go ahead and deliver the best outcomes in keeping with the terms of my mandate.”

On top of her role at the OHCHR, Callamard is also the director of the Global Freedom of Information Project at Columbia University in the United States.

Before this, Callamard worked as chef de cabinet for the secretary-general of the human Amnesty International, and also as the group’s research policy coordinator.

An expert in human rights, she holds a doctorate in political science from the New School for Social Research in New York.

Callamard said in an earlier email: “I welcome the invitation from the government assuming this includes essential guarantees (freedom of inquiry and movement, and non-retaliation), and enables engagement with the authorities and other key actors and stakeholders concerned with the recent wave of alleged extrajudicial executions.”

Her proposed investigation comes as Duterte’s war on drugs has killed more than 4,730 people since July 1, a day after Duterte took office. Of this number, around 3,000 have been slain in extrajudicial or vigilante-style killings. – Rappler.com