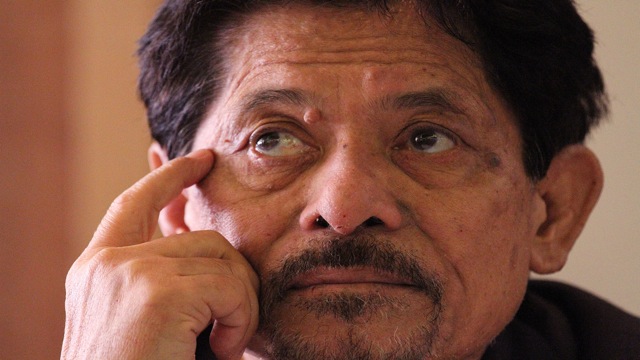 MANILA, Philippines – Moro National Liberation Front (MNLF) leader Nur Misuari met with President Rodrigo Duterte in Manila on Thursday, November 3, after a local court suspended the enforcement of warrants of arrest against him over rebellion charges in connection with the 2013 Zamboanga siege.

Chief peace adviser Jesus Dureza himself fetched the MNLF leader in Sulu in the Southern Philippines for his meeting with the president in the national capital, according to Communications Secretary Martin Andanar.

They left Jolo Sulu 11am Thursday, November 3, and arrived in Manila past 1 pm, Andanar said.

On October 27, Pasig City Regional Trial Court Branch 158 hearing the rebellion charge against Misuari granted a motion to suspend the proceedings and enforcement of warrants of arrest against Misuari. It is effective for a period of 6 months unless sooner lifted by the court. (See court document below)

Misuari is also charged with crimes against humanity for the 3-week Zamboanga siege that killed over 200 people, mostly rebels, and displaced about 24,000 families.

The court noted that the suspension of the warrants of arrest was supported by the Office of the Presidential Adviser on the Peace Process (OPAPP) and the Department of Justice. The defense counsels and the Zamboanga City government did not oppose the motion.

“The court is cognizant of the importance of the peace talks which the Executive Department desires to conduct with Misuari as recognized leader of the MNLF,” according to the ruling.

“We should all be optimistic and we should even praise to the high heavens the people who work behind this, so once and for all, the Moro Islamic Liberation Front, the Moro National Liberation Front, and the government of the Philippines come up with an agreement that will finally seek peace within our Moro brothers and the rest of the Philippine government,” Andanar said.

But Duterte said the peace process should be “inclusive” of all interest groups in the Mindanao, including the MNLF.

Duterte is expected to sign an executive order creating an expanded Bangsamoro Transition Council (BTC) that will revise a proposed law creating the Bangsamoro region.

“It only means that there’s a bigger chance for the Bangsamoro peace agreement to really push through because it’s the same agreement that failed last administration,” said Andanar.