Anti-Marcos groups urge SC: ‘Side with the truth’

Nov 4, 2016 2:28 PM PHT
Patty Pasion
Facebook Twitter Copy URL
Copied
'If Marcos, a dictator and plunderer, gets buried at the Heroes' Cemetery, what shall we call the real heroes who fought against the dictatorship?' says UP historian Alvin Campomanes at a rally in front of the High Court 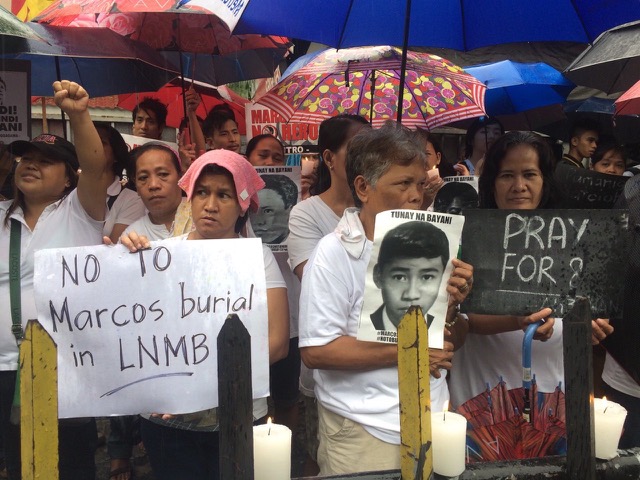 MANILA, Philippines – Groups opposed to a hero’s burial for former president Ferdinand Marcos urged the Supreme Court (SC) on Friday, November 4, to “side with the truth” when it rules on the case in a few days.

Martial Law victims and their families, activists, a youth civic group, and some educators braved the rains in front of the SC as they called on the High Court “for the last time” to vote against the interment of the strongman at the Libingan ng mga Bayani.

The High Court is expected to release a decision by Tuesday, November 8, when the status quo ante order (SQAO) it had issued on a hero’s burial for Marcos lapses.

Susan Quimpo of Bantayog ng mga Bayani Foundation, the sister of two Martial Law victims, said the Court should “side with the truth” when it decides on the  petitions lodged against the burial.

Quimpo, also a member of the coalition of the burial protesters, said her group remained hopeful that the SC would rule in favor of the petitioners. They have yet to consider the possibility of filing a motion for reconsideration despite reports that it would be a close vote.

“We are not talking about it yet. And I don’t think there is a set discussion to do that. We are still hopeful to get the 8 votes by Tuesday,” she said.

Petitioners need 8 votes to win the case. A tie would favor the respondents – the Marcos family and the Duterte administration which is implementing the state interment.

On October 18, the SC extended for the second time the SQAO it first issued in August, extending it to November 8. (READ: SC extends order putting Marcos burial on hold) 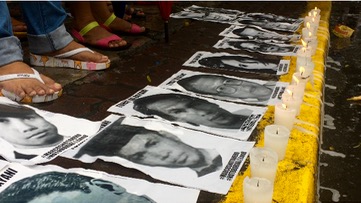 Historian Alvin Campomanes of the University of the Philippines stressed how a hero’s interment for Marcos would contradict history.

“Just because you weren’t born during Marcos’ time, you can already keep quiet because you did not directly experience it,” he said.  (READ: #NeverAgain: Martial law stories young people need to hear)

“As a history professor born in 1987, I am a proof that young people should not be ignorant of the past,” Campomanes added.

“You can just imagine – every year, the Marcoses would have a celebration of the achievements [during Martial Law] at the Libingan ng mga Bayani. The real events of the Martial Law will be covered up,” he said.

“To bury him there is a very powerful symbolic act that what happened [during the Martial Law] is just alright.”

Petitioners against the hero’s burial argued that Marcos is no hero due to state-sanctioned atrocities and the human rights violations committed by government forces under his term. They also cited the fact that human rights victims of the Marcos regime had been awarded compensation by a US court as well as Philippine law.

Duterte made a last plea to the High Court at a news briefing on October 16, urging the magistrated not to decide on the basis of “emotion,” but reiterated his position that he would abide by the decision. – Rappler.com