Duterte: ‘I don’t have the men’ to run after illegal gambling

Nov 7, 2016 9:36 PM PHT
Bea Cupin
Facebook Twitter Copy URL
Copied
The Philippine president clarifies he's all for stamping out illegal gambling, but he simply doesn't have enough people to run after this network 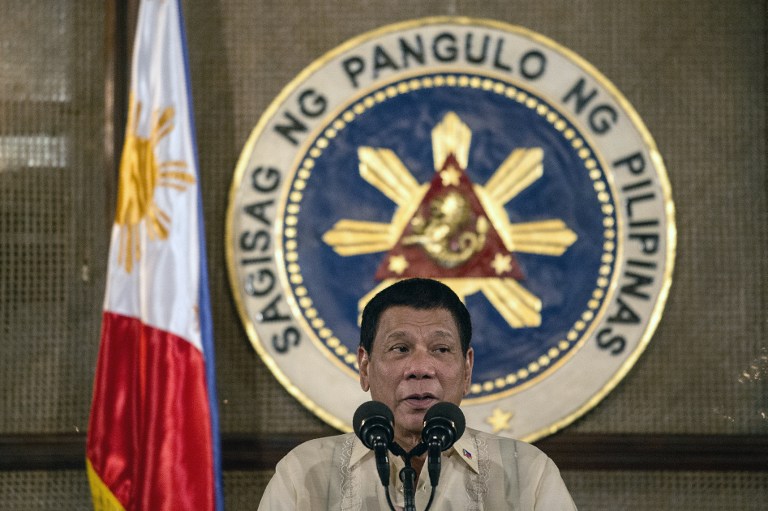 MANILA, Philippines – President Rodrigo Duterte on Monday, November 7, said he wasn’t chasing after illegal gambling, not because he approves of it, but because of realities on the ground, including a sheer lack of manpower.

“The problem is I do not have the men na to focus on one area, kagaya ng droga (like in the campaign against illegal drugs). Kasi pag nabankante ‘yang network diyan (Because if that network is vacated), nature hates vacuum. And somebody will just have to take over the vacuum that you leave,” explained Duterte on Monday, November 7, during the oath taking of newly-elected National Press Club of the Philippines officers.

Since he was sworn into power, Duterte has led a much-supported but highly-criticized “war on drugs” nationwide. Police have tallied more than 4,700 deaths nationwide since July 1, 2016 – a mix of 1,700 suspects killed in police operations and another 3,001 “deaths under investigation” or people whose bodies were dumped along dark and quiet streets with signs that label them as drug pushers or common criminals.

Duterte and his administration has been criticized in the past for focusing on illegal drugs while ignoring other problems, including illegal gambling. The numbers game jueteng, for instance, is big business in the Philippines and is typically run by influential gambling whose networks involve the police and government officials.

“Usually it’s always under the protection and consent of the [police] precinct commanders, which in turn has the blessing of the RD (regional director) and upwards. Ganon ‘yan eh (That’s how it is). I saw it works in the Philippines,” added Duterte.

Besides, Duterte reasoned out, the tendency would be for gambling operators to shift to illegal drugs should their first line of business be shut down.

“The fight against drugs is actually a working network of the big ones. And unless you’re able to destroy the apparatus national level, you’d not be able to get a relief sa drug problem natin,” said Duterte.

It’s not the first time for an official from the Duterte administration to state personnel – or the lack thereof – in the absence of an all-out campaign against illegal drugs.

As early as August, PNP chief Director General Ronald dela Rosa, Duterte’s handpicked choice to lead the police, said that a “war on illegal gambling” would follow the ongoing campaign against illegal drugs.

Law enforcement agencies initially had 6 months – or until December 2016 to “win” the campaign against narcotics. But Duterte extended the deadline by 6 more months, citing the supposed severity of the problem. – Rappler.com