Pacquiao: Nothing wrong with paying for gov’t officials’ US trip 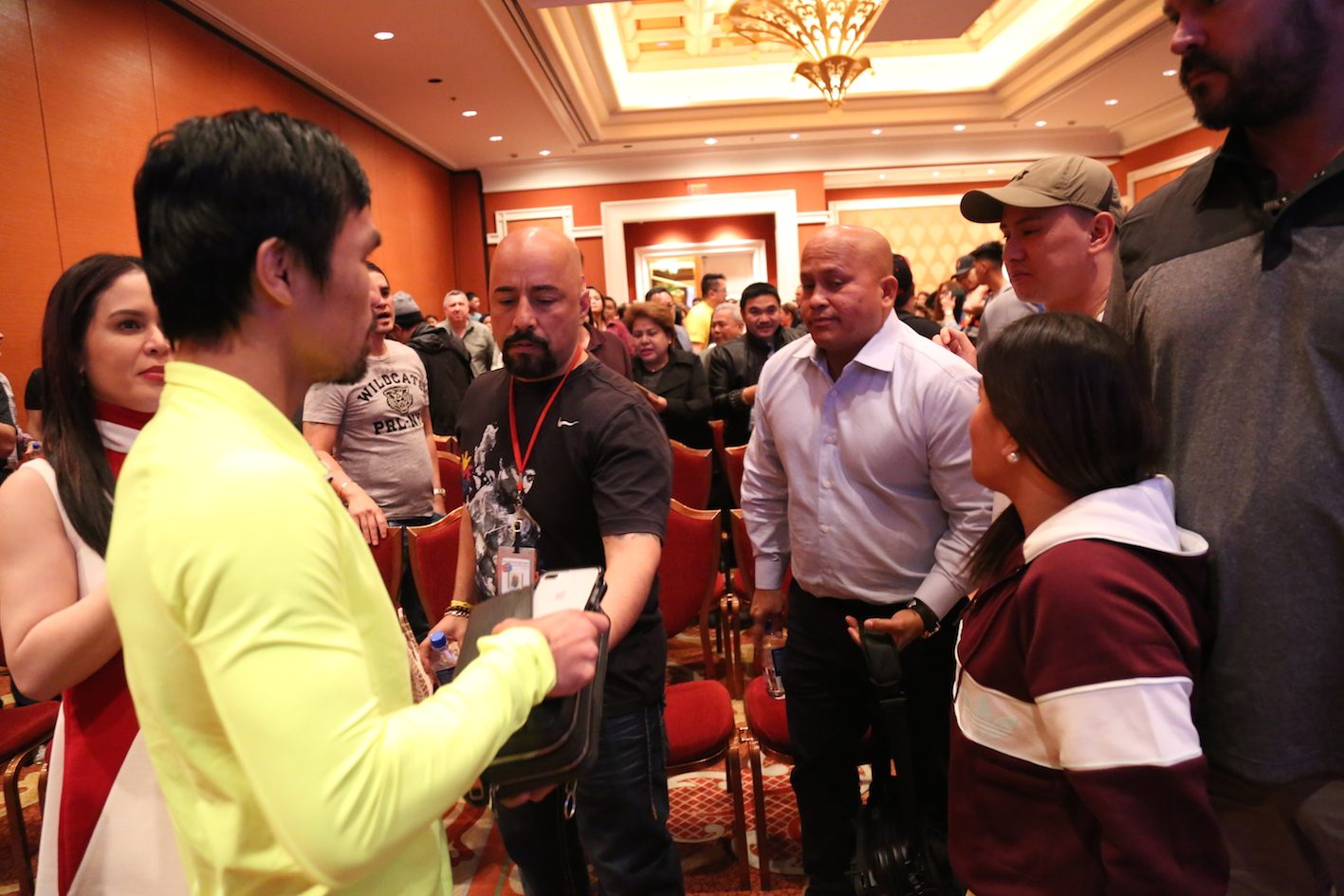 MANILA, Philippines – Senator Manny Pacquiao said there is nothing wrong with shouldering the trip of some government officials who watched his boxing match in the United States.

Pacquiao said this to Senate reporters on Tuesday, November 8, two days after his victory over Jessie Vargas in Las Vegas, Nevada.

Pacquiao is a partymate of President Rodrigo Duterte while Dela Rosa and Aguirre are long-time allies of the latter.  Tiangco was Pacquiao’s former partymate in the United Nationalist Alliance.

It is still unclear if Pacquiao paid for Aguirre but Tiangco, for his part, told Rappler he himself paid for his trip except for the boxing match ticket and the private jet ride from Las Vegas back to Los Angeles.

Dela Rosa admitted in a media interview that the world boxing champion fully funded his and his family’s US trip. The PNP chief said he did not spend a single centavo of his personal funds for the trip.

(I’m not spending government funds. Our airfare, roundtrip ticket, hotel accommodation of my wife and my kids, even allowance, are paid for by Senator Pacquiao.)

Pacquiao said that’s just how Bisayas are – a term referring to Filipinos living in the Visayas and Mindanao who speak the Cebuano language. Pacquiao hails from General Santos City while Dela Rosa is from Davao, both in Mindanao.

(You know us Bisaya, it’s better for us to treat someone than to do bad things. You know, us we don’t want any illegal activities so it’s better to treat others.)

Pacquiao is a member of the Senate committees on justice and human rights and public order, the two panels that investigated the spate of extrajudicial killings linked to the Duterte administration’s war on drugs.

The two committees are also set to probe the role of the police in the killings of Albuera Mayor Rolando Espinosa Sr of Leyte and Mayor Samsudin Dimaukom of Datu Saudi Ampatuan, Maguindanao.

There are laws on gifts to public officials and employees.

Under Republic Act 6713 or the Code of Conduct and Ethical Standards for Public Officials and Employees, “Public officials and employees shall not solicit or accept, directly or indirectly, any gift, gratuity, favor, entertainment, loan or anything of monetary value from any person in the course of their official duties or in connection with any operation being regulated by, or any transaction which may be affected by the functions of their office.”

The implementing rules and regulations of RA 6713 provide that the following gifts can be received by government officials and employees:

Presidential Decree No. 46 prohibits public officials and employees from receiving gifts, and private persons from giving gifts to the former on any occasion, including Christmas.

When he led the PNP,  Director General Alan Purisima was criticized after he admitted during a Senate hearing that he allowed contractors to build his official residence inside Camp Crame for free and he purchased a Toyota Land Cruiser at a huge discount. – Rappler.com