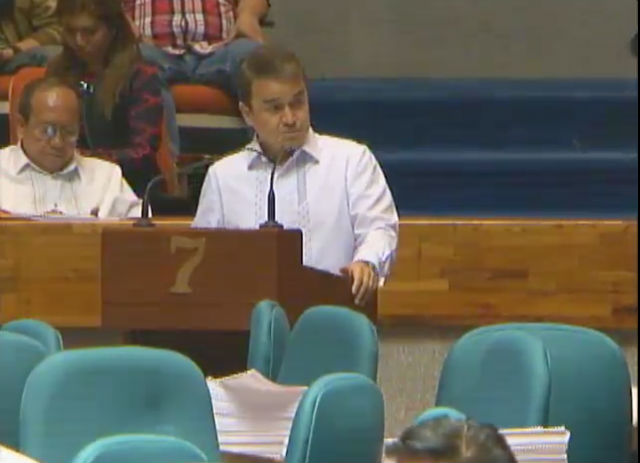 In his speech during the House session on Monday, November 14, Barbers questioned the circumstances of how Pichay became president of Claver Mineral Development Corporation and why the firm continues to ship nickel ore despite a suspension by the Department of Environment and Natural Resources (DENR).

“Mr President, President Rodrigo Duterte, I appeal to you on behalf of my constituents. You have promised to stamp out corruption. The violations are not being hidden, they are committed openly for everyone to see, as if challenging us yet insulting and mocking all of us. Your action, Mr President, would be an eloquent fulfillment of your promise,” said Barbers.

He cited a recent statement of Maria Malaya, the spokesperson of the National Democratic Front in northeastern Mindanao, who alleged that Pichay used his position as congressman to acquire Claver through “fraudulent means.”

Pichay also supposedly used his position to influence the Securities and Exchange Commission to allow him to control the company through his connections with the DENR and the Mines and Geosciences Bureau.

Surigao del Norte businessman Ireneo Cezar and members of the Manobo and Mamanwa tribes have already asked the National Bureau of Investigation to probe Pichay for alleged corporate identity theft and appropriation of mineral ore.

“Mr Speaker, honorable members of this House, if this is not a mockery of our laws, then what is? Shall we allow, condone, tolerate, and turn a blind eye [to] the continued travesty of justice that is being displayed so unashamedly? Shall we be a willing party to his patently illegal activities, through our inaction?” asked Barbers.

“I call on the leadership of this House to do something to help my constituents who are suffering over this indescribable abuse of power, and to redeem the honor of the House of Representatives from this unspeakable madness,” he added.

Barbers’ privilege speech is just the latest development in his longtime conflict with Pichay.

The two lawmakers nearly got into a brawl and hurled expletives at each other after a heated debate on charter change during a hearing of the committee on constitutional amendments last October 12.

This then led Pichay to file an ethics complaint against Barbers, who said he would be filing a counter-complaint.

In 2005, Pichay wanted to kick Barbers out of their party, the Lakas-Christian Muslim Democrats of then president and Pampanga 2nd District Representative Gloria Macapagal Arroyo, for backing the impeachment complaint against Arroyo.

A hit vs Gina Lopez, too

In his speech, Barbers asked why Claver is still allowed to ship ore even if the company is among the 10 mining firms whose operations have already been suspended following the DENR’s audit.

“Contrary to her media pronouncements and actions of suspending mining companies left and right, here comes a long suspended mining firm illegally acquired and operated by Congressman Pichay, being given a new lease on life.  I never thought that the DENR possesses the power to resurrect Lazarus from the dead,” said Barbers.

The matter was previously raised during the DENR’s budget hearing at the House on September 5. But Pichay insisted shipping ore is not covered by the suspension.

“The issues that Barbers has raised on the floor have already been peddled by his camp in the media, and all these we have already fully answered in the same forum. We welcome any probe so we can be cleared of his false accusations,” Pichay said in a statement sent to reporters after the session.

He then urged Barbers to be “man enough” to air his accusations outside the halls of the Batasang Pambansa “so he can be made answerable for his lies.”

“He should be man enough not to hide under the cloak of parliamentary immunity,” said Pichay.

“We also urge him to come clean on the reason for his attacks on me, namely, that he blames us for his political debacles since 2007, because we supported his political opponents who won over the Barbers clan,” added the lawmaker. – Rappler.com