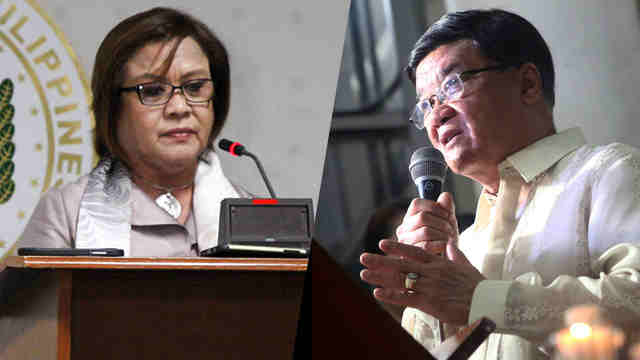 MANILA, Philippines (UPDATED) – Senator Leila de Lima’s public admission that she had an affair with her former driver and bodyguard is “strong evidence” to disbar her, Justice Secretary Vitaliano Aguirre II said on Tuesday, November 15.

Aguirre made the statement after the senator admitted in an exclusive television interview that she had a relationship Ronnie Dayan, whom witnesses at a congressional inquiry had tagged as her alleged bagman in collecting drug money from convicts when she was justice chief.

No less than President Rodrigo Duterte revealed in a televised speech the relationship between the senator and Dayan – a matter that was known in limited political circles.

Duterte and Aguirre had alleged that drug lords were able to operate inside the national penitentiary because they paid bribes to De Lima, who was justice chief then, through Dayan.

(With her admission, the probability that she used Dayan to collect money at the NBP has become even more believable.)

The DOJ chief added that this also corroborated the testimony of several witnesses they presented at the House inquiry into illegal drugs at the national penitentiary that De Lima has a romantic relationship with Dayan.

(It proves that we did not manufacture the said relationship, contrary to her allegation. This was corroborated by the statement of witnesses; the link to Dayan was established.)

What De Lima had consistently denied, however, was her alleged links to illegal drugs. She had been mum about her supposed relationship with Dayan until the TV interview.

De Lima, a well-known election lawyer prior to joining government, only gave a succinct response to Aguirre. “No, that’s his opinion.”

De Lima, in the TV interview, said that her relationship with Dayan, which lasted for “a few years,” was part of her “frailties as a woman.”

She has repeatedly denied receiving drug money, saying the allegation was anchored on the President’s “personal vendetta” to destroy her. (READ: The public trial of Leila de Lima)

“Like many of us, including my detractors, some decisions and relationships in our past have not been the best and the wisest. I have learned from these experiences and resolved to use my pain to focus on the good I can do,” De Lima said in a separate statement.

Amid her controversial admission and other issues hurled against her, De Lima said her reputation as a public servant remains “untarnished” to date. She maintained she has never allowed her personal life to interfere with her government service.

“Ito lang masasabi ko, simple lang dahil ayoko sana sagutin ‘yan (This is all I have to say, very simple as I didn’t want to respond to that) because I really don’t feel right engaging publicly about private matters. My record as a public official first as CHR chairperson and next as secretary of justice speaks for itself,” De Lima told reporters on Tuesday, November 15, a day after her interview aired on national TV.

“My reputation is untarnished until now when it’s unfairly, unjustly besmirched by all these fabricated lies about my alleged involvement in the drug trade,” she added.

Asked for additional details on her ties with Dayan, the senator refused to answer, saying she is not comfortable talking about her private life. De Lima also pleaded for privacy after she made the public admission.

“I have already said my piece and I would not want to add anything more other than what I have repeatedly said in the past interviews. I do hope that you will respect my right to privacy over my personal life and not impute any more malice,” she said.

P1-million reward for info on Dayan

Last week, the National Bureau of Investigation filed multiple charges against De Lima, Dayan, and 15 others for their alleged involvement in the drug trade at the New Bilibid Prison when De Lima was justice chief.

The Volunteers Against Crime and Corruption (VACC) had earlier filed a complaint against De Lima, Dayan, and others based solely on testimonies of mostly convicts at the House inquiry into Bilibid drugs. On Tuesday, the VACC announced it had raised P1 million as reward money for information leading to the arrest of Dayan.

De Lima and Duterte have long been at odds over the issue of human rights. When she chaired the Commission on Human Rights, De Lima probed then Davao City mayor Duterte’s alleged involvement in the Davao Death Squad, a vigilante group that reportedly targeted criminals. This continued when she became justice secretary.

In the Senate, De Lima launched a probe into the spate of extrajudicial killings under the Duterte administration, renewing her tiff with Duterte. She was eventually ousted as chairperson of the committee on justice after she presented witness Edgar Matobato, who accused Duterte of ordering summary executions in the city.

In response, Duterte allies in the House launched a counter-inquiry into her alleged involvement in illegal drugs. Convicts – granted immunity from suit for their testimonies at the hearings – accused De Lima of receiving drug money from them through her alleged bagmen.

De Lima is facing at least 4 complaints before the Department of Justice, Supreme Court, and the Ombudsman for the same allegations. She is also facing two complaints before the ethics committee and an electoral protest before the Senate Electoral Tribunal, which might lead to her ouster as senator if she loses. – Rappler.com