Nov 15, 2016 4:45 PM PHT
Mara Cepeda
Facebook Twitter Copy URL
Copied
If the increase eventually gets final approval, SSS Chairman Amado Valdez says they can only implement it in two tranches, with the first P1,000 given by January 2017 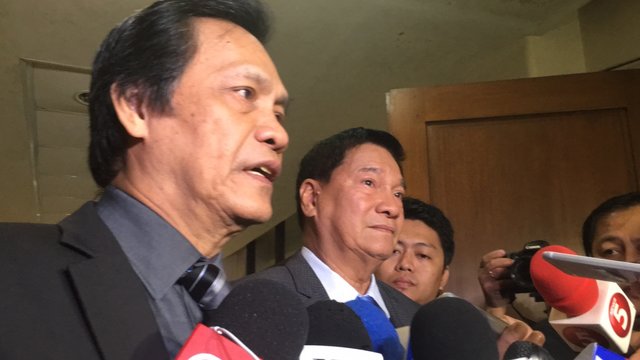 In its unnumbered committee report, the House panel on government enterprises and privatization approved House Bill (HB) Number 18, the consolidated version of all 17 measures calling for an increase in the SSS pension.

Committee chairperson and Cotabato 1st District Representative Jesus Sacdalan is hoping that the SSS would be able to implement the pension increase in time for Christmas.

(Well, we think this is doable that’s why we asked the SSS to implement it soon so there is immediate impact on the people. May the P2,000 increase be our Christmas gift to them.)

But SSS Chairman Amado Valdez said they can only implement the increase in tranches, with the first P1,000 hike to be done by January 2017 and the next tranche sometime in 2020.

This is to ensure that the SSS will not deplete its pension funds. (EXPLAINER: Are SSS pension funds in peril?)

(The P1,000 increase we can do it by January… We are doing it in tranches so by the time we implement the P1,000 hike, we can extend and extend with no obligations on the taxpayer. If we use government contributions, the last resort is for taxpayers to pay. We don’t want to do that.)

“We’ll really see to it that the administrative machinery would be able to raise the funds para do’n sa kailangan natin (for the funds we need),” he added.

Valdez is urging the House panel, however, to sponsor a joint resolution instead of HB Number 18 before the plenary session.

Valdez explained that there would be legal ramifications for the SSS should both houses of Congress end up approving the pension hike through a bill.

“Ang pangalawang issue namin which I discussed with the [committee] chairman yesterday [is] ‘yung legality kasi of Congress appropriating funds (Our second issue which we discussed with the committee chairman yesterday is the legality of Congress appropriating funds)… Kasi kung batas (If a law is passed), it would violate the contractual obligation [of the] SSS with the ones who are paying the contributions, because these are already obligated. So I hope it will be discussed in the plenary [that] it will just be in the form of resolution,” said the SSS chief.

Sacdalan said he plans to discuss Valdez’s concerns with the committee on rules before sponsoring the measure or joint resolution at the plenary.

The previous 16th Congress had passed its own version of the P2,000 hike in SSS pension funds but this was vetoed by former president Benigno Aquino III, who cited “dire financial consequences” for the SSS. (READ: Aquino defends veto on SSS pension hike)

Colmenares, who attended Tuesday’s committee hearing as president of the National Union of Peoples’ Lawyers, was happy that Valdez acknowledged Congress’ reasons to increase the pension.

“Natuwa kami sa admission ng SSS na may batayan naman pala ang proposal ng Congress na P2,000 dagdag na pension at kailangan talagang mag-reform sa SSS (I am happy with the admission of the SSS that there is basis for Congress’ proposal to increase pension by P2,000 and that there is a need to reform SSS),” said Colmenares.

As for Valdez’s request that the pension increase be implemented in tranches, Colmenares said congressmen should carefully study the proposal during the plenary session.

Read the full committee report below: