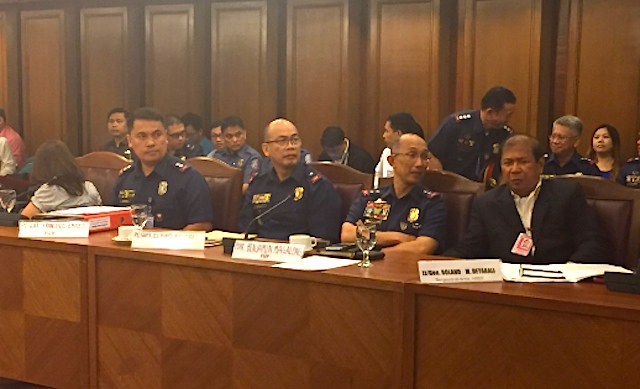 MANILA, Philippines –  An inmate has linked Senator Leila de Lima to the attack on high-profile inmate Jaybee Sebastian at the New Bilibid Prison in September, a police officer who led the probe into the incident said on Wednesday, November 16.

Police Superintendent Francisco Ebreo made the statement at the House inquiry into the so-called “Bilibid riot” that led to the death of high-profile inmate Tony Co and the wounding of 4 others, including Sebastian.

Ebreo, who bared the findings of the Philippine National Police-Criminal Investigation and Detection Group (CIDG) on the Bilibid incident to the House committee on justice, was asked about the possible motive for the attack on Tony Co and on Sebastian, which happened simultaneously in two different areas in Building 14 of the NBP.

Ebreo said that based on the sworn statement executed by convict Tomas Doniña who stabbed Sebastian during the incident, a “former colleague from the Philippine Navy” had asked him to find a way to keep Sebastian from testifying at the congressional inquiry into the Bilibid drug trade so that he could not implicate De Lima.

Ebreo said, however, that further investigation into the personalities mentioned by Doniña in his affidavit had yielded “negative results” so far – authorities have not found a “strong link or strong evidence…that the person he mentioned is really involved in the said plan.”

Police Director Benjamin Magalong said the CIDG, which was tasked only to conduct a fact-finding investigation, has not yet established the motive for the incident.

In his testimony at a congressional inquiry on October 10, or over a week after the Bilibid incident, Sebastian claimed that he gave De Lima millions for her senatorial bid. On November 4, the convicted kidnapper and carnapper had filed criminal and administrative charges against De Lima and former officials of the Bureau of Corrections (BuCor) and the New Bilibid Prison (NBP) before the Department of Justice.

De Lima had denied all the allegations. (READ: The public trial of Leila de Lima)

Based on its findings, the CIDG concluded that there was “no riot or tumultuous affray occurred” at the NBP on September 28 as “the incidents were triggered by separate causes and there was no showing that they acted together in a disruptive and tumultuous manner in carrying out a common purpose.”

“What transpired were two separate and simultaneous stabbing incidents inside the makeshift room of Tony Co and the mess hall area,” Ebreo said.

Tony Co reportedly grabbed Sinco by the neck for being a tattle-tale, prompting Dongail to come to the latter’s aid. Tony Co reportedly tried to attack Dongail with an ice pick, and the fight ended with Tony Co’s death and the wounding of the other two convicts in his cell as well as Dongail.

Doniña said in his affidavit that when he saw the commotion, he headed to the mess hall to “take the opportunity to stab Sebastian in order to prevent him from testifying in the House inquiry.”

The CIDG investigation showed that Dongail,  Sinco, and Doniña “may be held liable for the incident.”

Members of the PNP-Special Action Force who were on duty during the incident, the CIDG said, “acted with regularity in the performance of their respective duties and responsibilities.”

On the part of the BuCor and the NBP leadership, Ebreo said the investigation showed that they “immediately reacted and the courses of action they have undertaken in response to the incident were deemed appropriate.” – with reports from Mara Cepeda/Rappler.com