Chief state counsel: ICC has no jurisdiction on EJKs in Philippines 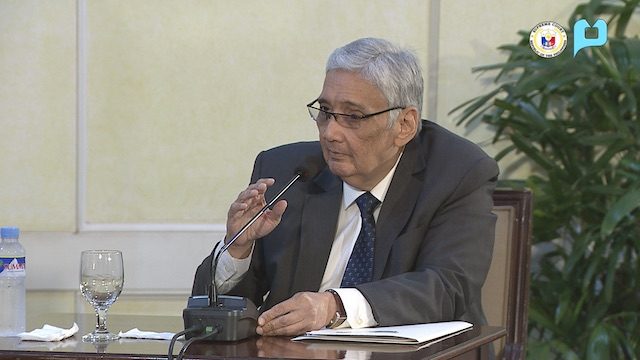 MANILA, Philippines – Under questioning from one member of the Judicial and Bar Council (JBC), chief state counsel Ricardo Paras said the International Criminal Court (ICC) does not have jurisdiction over the cases of extrajudicial killings (EJKs) in the Philippines.

Paras faced the JBC panel on Wednesday, November 16, during public interviews for the post to be vacated by retiring Supreme Court (SC) Associate Justice Jose Perez.

JBC executive committee chairperson Angelina Sandoval-Gutierrez asked Paras about his opinion on whether the ICC can take action on the rising number of deaths reported to be EJKs in the government’s bloody crackdown against illegal drugs.

Paras responded in the negative, saying that the ICC cannot exercise jurisdiction as long as Philippine courts are open.

“The ICC only exercises complementary jurisdiction. As long as our courts are open, they cannot exercise jurisdiction. So we should make it a point, and this is my advice to the President, keep the courts open. It is my view that this should be strengthened,” he said.

But Gutierrez pressed the question, asking how the ICC can acquire jurisdiction supposing the courts and law enforcement personnel are unwilling to take action.

Paras said special rapporteurs may be sent to the Philippines to conduct an investigation.

Gutierrez also asked Paras if EJKs constitute crimes against humanity, which the ICC defines as crimes committed as part of a widespread or systematic attack against a civilian population. (READ: IN NUMBERS: The Philippines’ ‘war on drugs’)

Asked if he thought EJKs could be considered a systematic attack against the civilian population, Paras answered that it is not an attack on the population but specifically on criminal elements.

He added that each case is different from the other and needs to be investigated. – Rappler.com