Nov 16, 2016 4:41 PM PHT
Jee Y. Geronimo
Facebook Twitter Copy URL
Copied
Martires says that while they spent 4 hours with the President last August in Davao City, he did not ask about any case 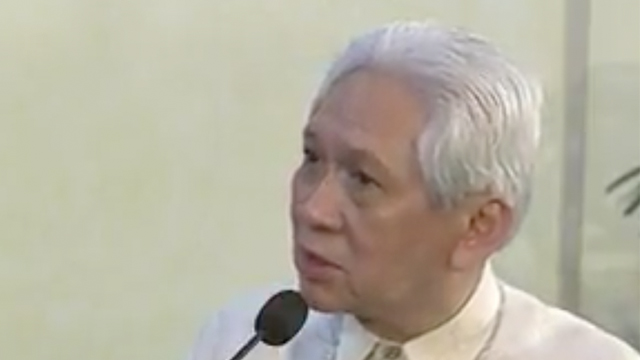 “In all honesty, your honor, I did not make a courtesy call to the President, neither did the Justices [Jose] Hernandez, [Geraldine Faith] Econg, and [Alex] Quiroz make that courtesy call,” Martires said, answering a question from JBC regular member Maria Milagros Fernan-Cayosa.

Trying to dispel questions about independence, he further explained how he met the President last August.

“We went to Davao City to conduct an out-of-town hearing. We arrived in Davao on a Sunday. We were informed that afternoon when we arrived that the President was going back to Manila. On Tuesday, I was asked by one of the justices if I am willing to see the President, and naturally, and a person in a sane mind will always say yes. Who am I to say I don’t like to see the President? So I said yes.”

On Thursday, August 4, as they were on their way to meet the President, Martires said he suddenly received a text message from retired justice Teresita Baldoz telling him: “Wow, you are going to see the President.”

Martires said while they did talk to the President and spent 4 hours with him, Duterte made no mention of any case or ask about any case.

Their conversation, Martires said, revolved around the war on drugs, Duterte’s life as a student, his experience with his professor identified as the late Justice Arsenio Solidum, and the history of Muslims.

In August, Chief Justice Maria Lourdes Sereno stressed the need to keep courts independent as justices paid courtesy calls on Duterte. She hoped the courtesy calls would not affect the separation of branches in government.

Another JBC regular member, Jose Mejia, asked Martires on Wednesday for assurance that the Sandiganbyan justice will maintain his independence should he be appointed as one of the associate justices in theSC.

Martires asserted that he has always maintained his independence even before joining the judiciary. He lamented how he was called pro-Marcos during former president Ferdinand Marcos’ time, and pro-GMA (Gloria Macapagal Arroyo) when Benigno Aquino III became president.

“But as I had said in one of my decisions, that the Court should not be influenced by any king or president. We should only rely and make our own decision pursuant to the evidence presented and the applicable law,” he said.

Martires said he maintained independence in the Garcia case “even if it meant that President Benigno Simeon Aquino III was mad at the Sandiganbayan, particulary at me and Justice Baldoz.”

“I insisted on what is right, and I didn’t care what Malacañang would do to us. I even heard I was the subject of a background investigation whether I earned from that case or not. But I maintained what I thought was right, I insisted that the Office of the Solicitor General cannot intervene or appear before the Sandiganbayan.”

Martires, who was appointed to the anti-graft court in 2005, penned the resolution approving the Garcia plea bargain deal that allowed the former military comptroller to petition for the lesser charge of direct bribery and money laundering, instead of plunder. In exchange, Garcia will have to surrender P135.43 million of his assets.

In 2011, Martires also wrote the decision dismissing a case against then Davao City mayor Rodrigo Duterte over the demolition of a park installed by his political rival in 2008.

A shortlist of candidates will be submitted by the JBC to Duterte, who will appoint the new SC magistrates. Under his term, Duterte will get to appoint 10 SC magistrates to replace retiring justices in the next 3 years. – Rappler.com