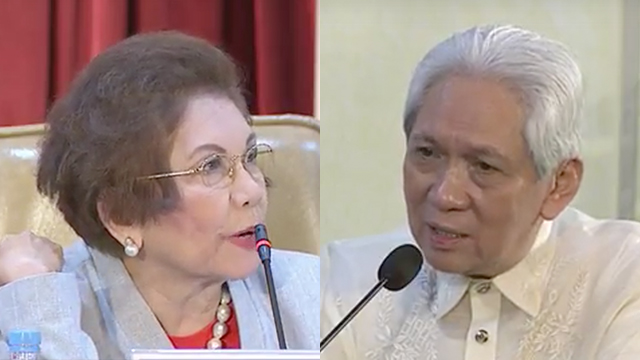 MANILA, Philippines – During the first day of the Judicial and Bar Council (JBC) public interviews for the slot of Supreme Court (SC) associate justices, candidates were tested on their “mastery of laws, rules, and jurisprudence.”

In particular, it was JBC Regular Member Angelina Sandoval-Gutierrez who asked questions on how candidates would vote on landmark Supreme Court cases.

On Wednesday, November 16, she asked Sandiganbayan Associate Justice Samuel Martires how he would decide on the SC case that acquitted former President Gloria Macapagal-Arroyo.

The High Court in July granted Arroyo’s “demurrer to evidence”, a plea to dismiss a case on the basis of weak evidence.

“If you were member of that court, would you have concurred or dissented?” Gutierrez asked Martires, who replied, “I will concur. There is no proof that the President amassed wealth.”

But Gutierrez asked if Martires has read the decision of the High Court. He replied he has not read it in its entirety.

“Therefore you cannot analyze the evidence before us now,” Gutierrez said. “You read it first before you conclude you are concurring.”

Martires, who was a former RTC judge from Agoo, La Union, was appointed to the anti-graft court in 2005 by Arroyo. (READ: JBC asks Sandiganbayan justice: Would you grant Enrile’s bail?)

In the Sandiganbayan, Martires penned the resolution approving the Garcia plea bargain deal that allowed the former military comptroller to petition for the lesser charge of direct bribery and money laundering, instead of plunder. In exchange, Garcia would have to surrender P135.43 million of his assets.