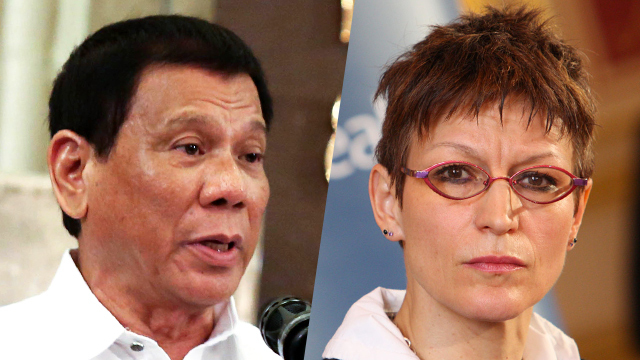 MANILA, Philippines – In exchange for allowing the United Nations to probe the spate of extrajudicial killings in the Philippines, President Rodrigo Duterte has one condition: a public debate between him and UN special rapporteur Agnes Callamard.

This was mentioned during the Senate deliberations on the proposed 2017 budget of the Department of Foreign Affairs on Wednesday, November 16.

“The President insisted on a public debate between himself and the UN rapporteur,” said Senator Paolo Benigno Aquino IV, citing DFA personnel behind him. Aquino was the one answering because he is the sponsor of the proposed DFA budget.

Aquino, in response, said: “No, it is not usual. But of course it is our right to also ask as other conditions have also been asked of us.”

The DFA said Callamard has no response yet on the specific condition.

De Lima asked: Would the invitation be withdrawn if the UN rapporteur declines the condition?

The DFA, through Aquino, said: “It’s a condition. But the inter-agency group would discuss it.”

The DFA said the inter-agency group composed of Filipino representatives would determine the issue next week, including the possible options should Callamard refuse to join Duterte in a “public debate.”

Callamard, the DFA said, has also relayed 3 conditions to the Philippine government: freedom of movement in the whole country, freedom of inquiry, and security.

Duterte first posed the challenge to Callamard in August, after the United Nations Office on Drugs and Crime (UNODC) expressed concern over the rise of killings of suspected drug personalities in the Philippines.

“I’d like to talk to that alleged expert of the UN; I demand that he comes here. Or if he wants we can go to a third country. Let him talk to me and let him face me with hard facts. Not newspaper clippings…. Let’s have a debate,” the President earlier said.

Chief Presidential Legal Counsel Salvador Panelo earlier dared UN rights experts to come to the Philippines so they can see for themselves that the government is not involved in extrajudicial killings in the war on drugs. – Rappler.com