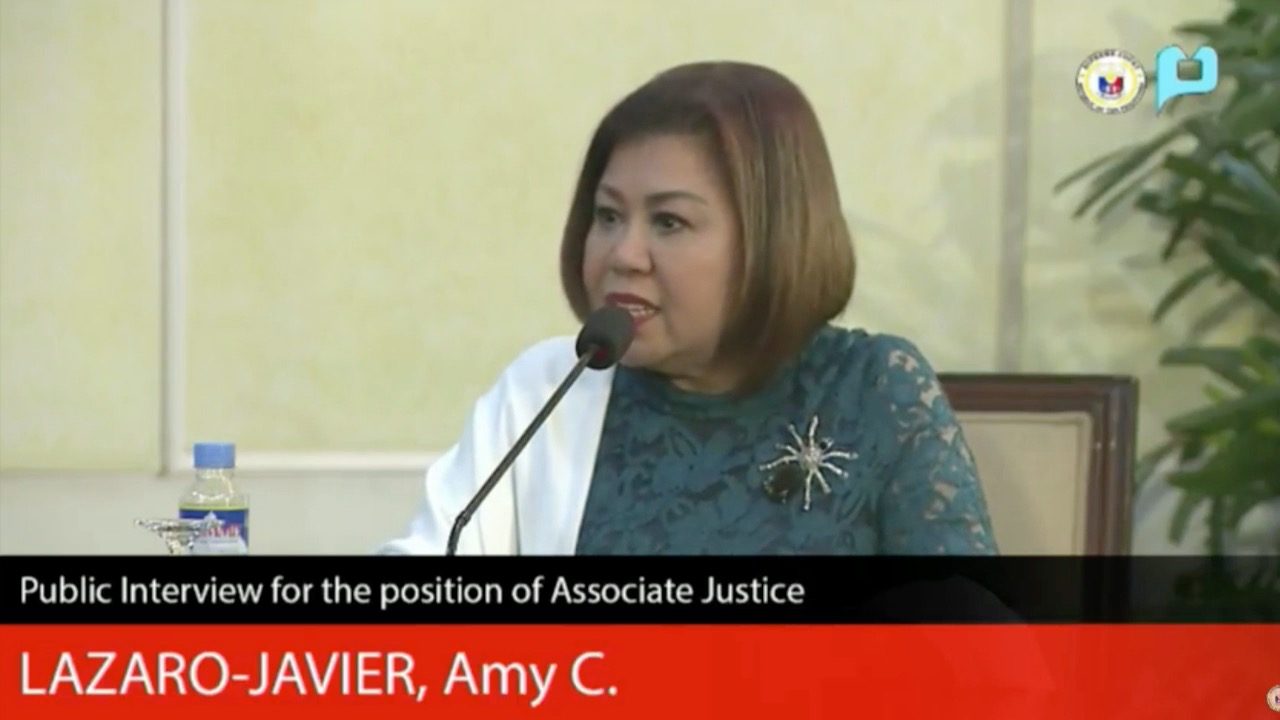 MANILA, Philippines – Court of Appeals (CA) Associate Justice Amy Lazaro-Javier on Thursday, November 17, said the killings happening now in the country are not yet crimes against humanity and crimes constituting genocide.

During her public interview with the Judicial and Bar Council (JBC), Javier was asked by JBC Regular Member Angelina Sandoval-Gutierrez about “extrajudicial killings” in the country which she said have “become nationwide.”

“Can you consider these an attack against the civilian population?” Gutierrez asked.

Before answering, Javier pointed out their exchange is just an academic discussion.

“I think there is a need to determine which killings are justified,” she answered, to which Gutierrez replied that “at this point, we cannot determine anymore” because the killings “have become widespread.”

“Is this not crime against humanity, at this stage, as you look at it?” she asked.

“No, your honor,” Javier said. She also said the killings are “not yet” crimes that constitute genocide because they are “not as widespread and as systematic.”

Gutierrez then asked Javier her definition of what is widespread.

“If we speak of genocide or widespread, systematic, direct attack, we’re not just speaking of thousands I think, we must be speaking of hundreds of thousands,” she explained.

From July 1 till the 2nd week of November, the Duterte administration’s campaign against drugs has already seen at least 4,882 personalities killed both from legitimate police operations and vigilante-style or unexplained killings.

Asked when the International Criminal Court (ICC) acquires jurisdiction of the issue, Javier said there must first be “a clear showing that the Philippine government is unable or unwilling to make the investigation.”

“At present do you think the government is unable or unwilling?” Gutierrez asked.

“It is not unable, it is not unwilling. I just would like to believe what General Bato [Philippine National Police chief Director General Ronald dela Rosa] has testified during the Senate hearing that all these unjustified killings, even those perpetrated by police officers, are under investigation by Napolcom [National Police Commission],” Javier answered.

Asked if she knew any investigation involving the killings, Javier said she has no sufficient knowledge to conclude that the government is unwilling or unable to investigate.

She taught in public schools while pursuing her law studies at the University of Sto Tomas, where she graduated class valedictorian in 1982. She passed the bar that year.

The JBC interviewed applicants eyeing two slots in the SC on Wednesday and Thursday, November 16 and 17. The posts in contention will be vacated by Associate Justice Jose Perez and Associate Justice Arturo Brion, who will reach the mandatory retirement age of 70 on December 14 and 29, respectively.