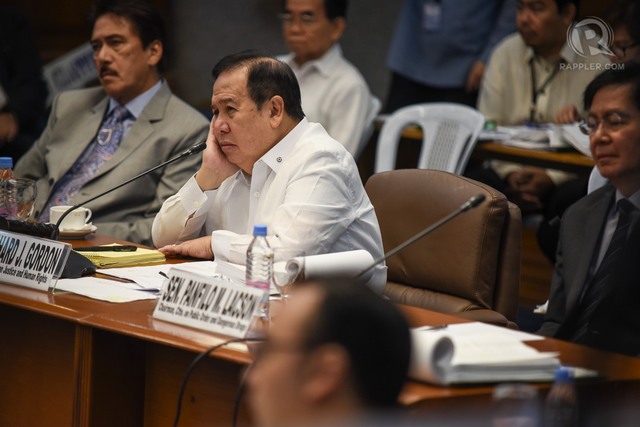 MANILA, Philippines (UPDATED) – The discussion was about the status of children in conflict with the law (CICL) who are in detention and holding centers. It turned into a conversation about Senator Richard Gordon’s enemy, Father Shay Cullen of the Preda Foundation.

During the Senate deliberation on the proposed budget of the Department of Social Welfare and Development, Senator Risa Hontiveros raised the issue of unsanitary and crowded youth centers. (READ: When ‘Houses of Hope’ fail children in conflict with the law)

This did not sit well with Gordon. He said if Hontiveros would insist on citing Cullen, it would be better not to listen to her.

“I don’t normally intervene when somebody is questioning here, but I will, because we’ve all had enough of this man who pretends to be a priest, but in reality he is like Judas Escariot. I am taken aback. If you’re gonna use him, I don’t think we should even listen to this,” Gordon said to Hontiveros.

Cullen is the president of Preda Foundation, a pro-child non-governmental organization based in Olongapo, where Gordon was mayor for more than a decade.

“The man you’re citing has a very dubious reputation, I would not want you to soil the proceedings here. He is a professional faultfinder, he makes money. He pretends to be helping here at the expense of the Filipino people. He spread lies all over Europe, and because of that he was able to raise money,” he said.

Hontiveros, in response, pointed out that while there are differing opinions about Cullen, the main issue at hand is the bad conditions inside juvenile centers.

“Aside from whatever various opinions we hold of the person, there’s value in his description of some of these centers. There’s also practical value for the DSWD to look into,” Hontiveros said.

She then motioned that Gordon’s attacks against Cullen be removed from the record.

Gordon then warned Hontiveros that if she insists on doing so, he would delay the proceedings.

“If you want to take it out for the record, I’m willing to filibuster here if you continue to do this,” Gordon said.

“I’m not continuing to do anything, I am just making a motion, Mr President,” Hontiveros replied.

But Senate Majority Floor Leader Vicente Sotto III said there is nothing wrong with what Gordon said, adding it is considered part of the latter’s privilege speech. Sotto said the words were not “unparliamentary” because they were directed at a third person, not at any lawmaker.

The animosity between Gordon and Cullen go a long way back to the 1980s, when the American military base was still in Olongapo.

Cullen was an outspoken critic of the American presence. Then Mayor Gordon and the residents had a different view because the city was then heavily dependent on the base for economic survival.

According to a 1990 article by The Washington Post, Cullen “decried the problems that he identifies with the base”: American servicemen’s sexual assault of children and prostitution.

Then mayor Gordon, according to the same article, opposed it, saying the impact of the base was “more positive than negative,” citing economic growth.

When Gordon campaigned for president in 2010, he posted on his official Facebook page on February 1 a note titled “Who is Fr Shay Cullen of Preda and why he hates Dick Gordon.”

He accused Cullen of exploiting victims of prostitution and drug trafficking for media mileage.

“Fr Cullen was not only a priest but a caucasian who believed he had his own White Man’s burden of saving the poor Filipinos living in Sin City Olongapo from the clutches of the evil Americans,” Gordon said in his post

“He was a good communicator and exploited media by exposing victims of prostitution, drug trafficking at his own expense with no regard for the outcome of the case much less the plight of the victims,” he added. – Rappler.com