Nov 18, 2016 7:34 PM PHT
Agence France-Presse
Facebook Twitter Copy URL
Copied
Up to 150 members of the Abu Sayyaf trade fire with an army unit on the remote southern island of Jolo. They later withdraw, taking with them 7 of their dead. 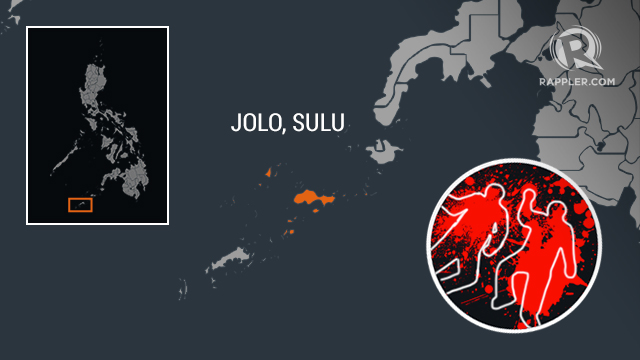 MANILA, Philippines – Four Philippine soldiers and 10 Islamic militants were killed on Friday, November 18, as security forces clashed with gunmen who have abducted dozens of foreign sailors at sea in recent months, the military said.

Up to 150 members of the Abu Sayyaf traded fire with an army unit on the remote southern island of Jolo, but later withdrew, taking with them 7 of their dead, regional military spokesman Major Filemon Tan told the Agence France-Presse.

“The purpose of the operation is to destroy the enemy and to rescue the victims,” said Tan, who added the troops did not see any of the captives held hostage by the militants.

Four soldiers were killed and 9 others wounded in the 45-minute firefight, while the authorities also recovered the bodies of 3 slain Abu Sayyaf members, Tan added.

The Abu Sayyaf was formed in the 1990s with seed money from Osama bin Laden’s Al-Qaeda network, and has earned millions of dollars from kidnappings-for-ransom.

In recent years some of its leaders have pledged allegiance to Islamic State (ISIS) fighters in Syria and Iraq.

The Abu Sayyaf is also blamed for the Philippines’ deadliest bombings but in recent months, many of its activities have been kidnappings on the high seas.

Five crew members of a Vietnamese cargo vessel were also kidnapped by unknown gunmen in nearby waters last week.

In recent months, the Abu Sayyaf has been accused of kidnapping dozens of Indonesian and Malaysian sailors in waters off the southern Philippines.

In what maritime experts described as a landmark incident, the South Korean captain of another cargo ship and a Filipino crewman were abducted off their vessel in October, the first such attack on a large merchant vessel.

Abu Sayyaf militants this year beheaded two Canadian hostages after demands for millions of dollars were not met. Most of the Indonesian and Malaysian sailors were released after ransoms were reportedly paid.

However two more Indonesian sailors were abducted on November 5.

Philippine President Rodrigo Duterte has launched a military offensive to “destroy” the Abu Sayyaf, and Tan, the military spokesman, said Friday’s clash was a continuation of the campaign.

But the militants have defied more than a decade of US-backed similar offensives, surviving in their mountainous and jungle-clad southern island strongholds where they have support from local Muslim communities. – Rappler.com