Nov 19, 2016 1:53 PM PHT
Boy Ryan B. Zabal
Facebook Twitter Copy URL
Copied
According to the police, an immigration officer 'approached the suspects, who were both naked, to stop doing the act' 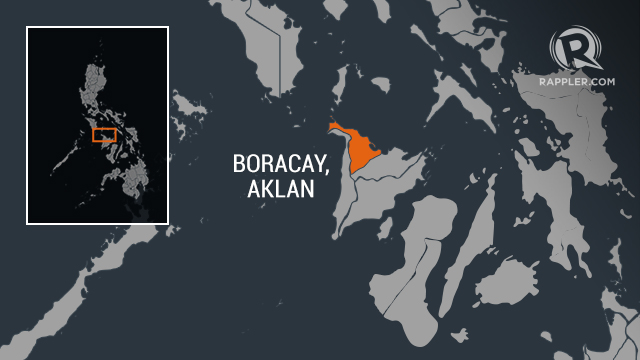 BORACAY, Philippines – Going topless and having sex on the world famous beaches of Boracay Island? Don’t even think about it. It can get you in trouble for indecent behavior.

Two foreign tourists were apprehended on the beachfront near Station 2 in Barangay Balabag at around 2:20 am Friday, November 18, after an immigration officer caught them having sex on the beach.

Immigration Officer I Aldwin Pascua told the police that he saw 44-year-old Briton “Irene”* sitting on Italian “Steffano”* and engaging in an “act of intimacy”.

Police said the “immigration officer approached the suspects, who were both naked, to stop doing the act. However, the foreigners went farther at the shoreline and waved their hands, trying to tease the immigration officer.”

The foreigners met hours before and had a few drinks prior to their arrest. They were charged by responding policemen from the Boracay Tourist Assistance Center with grave scandal.

Article 200 of Philippine Penal Code defines grave scandal as “the performance or doing any act which is highly scandalous as to offend against decency and good custom.”

Investigation showed that Steffano stayed in a small resort in Station 2, while Irene stayed in a resort in main road Station 1 in Barangay Balabag.

The tourism department earlier urged the establishments in Boracay to post signs or warnings “to be happy and enjoy while on the island” and to engage in certain activities privately in hotel rooms. – Rappler.com

*Not their real names