Nov 21, 2016 11:55 AM PHT
Patty Pasion
Facebook Twitter Copy URL
Copied
(UPDATED) Petitioners ask the Supreme Court to compel the respondents to return all the public funds used for the burial of the late dictator Ferdinand Marcos at the Libingan ng mga Bayani 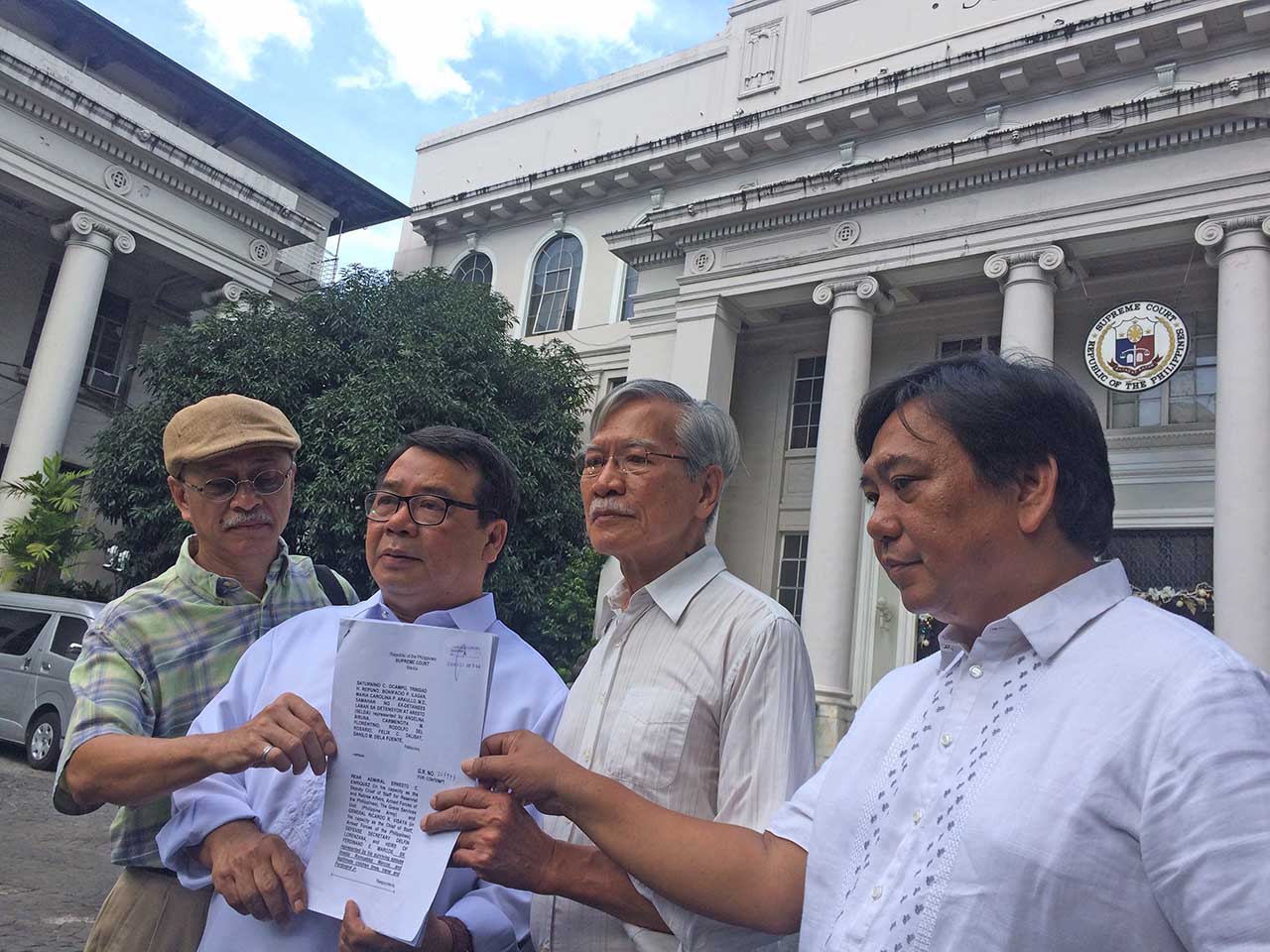 MANILA, Philippines (UPDATED) – Leaders of leftist groups filed a petition for contempt against the Marcos family, Armed Forces of the Philippines (AFP), and the Department of National Defense (DND) for the surprise burial of the late dictator Ferdinand Marcos at the Libingan ng mga Bayani (Heroes’ Cemetery).

The petition was filed before the Supreme Court (SC) on Monday, November 21, by former Bayan Muna representatives Satur Ocampo and Neri Colmenares, together with the Samahan ng Ex-Detainees Laban sa Detensyon at Aresto (Selda).

The petitioners want the Marcos family, AFP, and DND cited in contempt of court for proceeding with the burial of the late dictator last Friday, November 18, even as the SC decision on the matter is not yet final and executory.

According to the petitioners, they filed on November 11 an urgent motion “to hold in abeyance” the hero’s burial, pending the filing of motions for reconsideration. The SC previously voted 9-5 to allow a hero’s burial for Marcos, which had been ordered by President Rodrigo Duterte.

The petitioners said they were informed on November 13 that the SC received a copy of their urgent motion on the same day it was filed. Citing SC rules, petitioners were supposed to have 15 days, or until November 26, to file their appeal.

Carrying out the “hasty and shady” burial last Friday, the petitioners said, was tantamount to “improper conduct tending, directly or indirectly, to impede, obstruct, or degrade the administration of justice.”

“I see here the element of connivance between the Marcoses and the Armed Forces of the Philippines,” added Ocampo.

The petitioners are asking the SC to impose a fine on the respondents and compel them to return all the public funds used for the burial.

Ocampo clarified they have not appealed for the exhumation of the remains of the late dictator, but said it would be the natural course of action if the SC reverses its decision.

Later on Monday, Albay Representative Edcel Lagman, another petitioner in the original case, filed an urgent motion, asking the High Court to have Marcos’ remains exhumed from the Libingan ng mga Bayani. He also asked the SC to subject the remains to forensic examination to determine if they were indeed Marcos’ – the late dictator’s body supposedly having been preserved with wax for decades in his hometown of Batac, Ilocos Norte.

On the day of the burial, Defense Secretary Delfin Lorenzana had said he was not informed about it. Lorenzana was in Peru at the time, as part of Duterte’s delegation to the Asia-Pacific Economic Cooperation (APEC) Summit.

Martial Law victims, human rights activists, and ordinary citizens have expressed outrage over Marcos’ burial at the Libingan ng mga Bayani, which was announced to the public only around an hour before it took place. (READ: Students told after Marcos burial: ‘Bigger lessons outside classroom’)

Protesters led by the Campaign Against the Return of the Marcoses to Malacañang (Carmma) plan to hold a grand rally on Friday, November 25.

Another group of Martial Law victims will also head to the Heroes’ Cemetery on November 30, the birth anniversary of hero Andres Bonifacio, to reiterate that only “real heroes” should be buried there. – Rappler.com