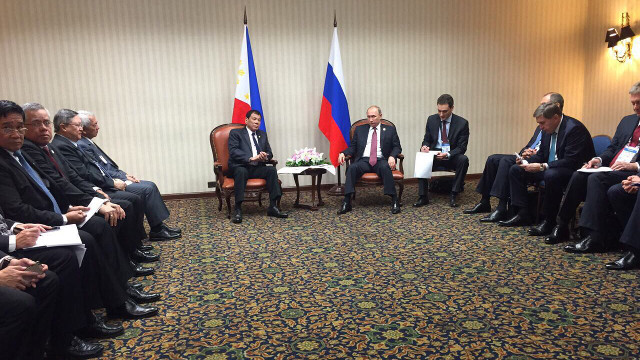 Both presidents were in Peru to attend the 24th Asia-Pacific Economic Cooperation (APEC) Leaders’ Meeting.

“The [Russian] President invited, of course, our President to visit,” Esperon said in a press conference on Sunday.

Duterte is likely to accept the invitation, he added.

Malacañang sources have told Rappler that arrangements were already being made for the visit, even before the two presidents met. They are only waiting for the Russian government to determine a specific date.

Esperon and other Cabinet officials told reporters how the Duterte-Putin bilateral meeting went, a meeting which the Philippine President had said he was looking forward to.

Putin had apparently responded agreeably but safely to Duterte’s mention of Western “hypocrisy.” Duterte brought this up during the part of their meeting opened for media coverage.

“[Putin] said, ‘Our assessments coincide in many respects,'” recalled Esperon, who added that the Russian President was speaking through an interpreter.

(He said something good about how President Duterte’s moves show he is being firm. And in a way, so that he is not taken advantage of, something like that.)

Duterte has been open about his admiration for Russia, while being hostile to US President Barack Obama and other US officials who he has called “hypocrites” for “lecturing” him about human rights abuses being linked to his anti-drug campaign.

Recently, Duterte has said he prefers a “new world order” dominated by Russia and China.

On the sidelines of the APEC Summit, Duterte had a bilateral meeting with Chinese President Xi Jinping, aside from with Putin.

Due to “jet lag,” the Philippine President skipped traditional APEC events like the “family photo” of heads of state and APEC leaders’ retreats. – Rappler.com