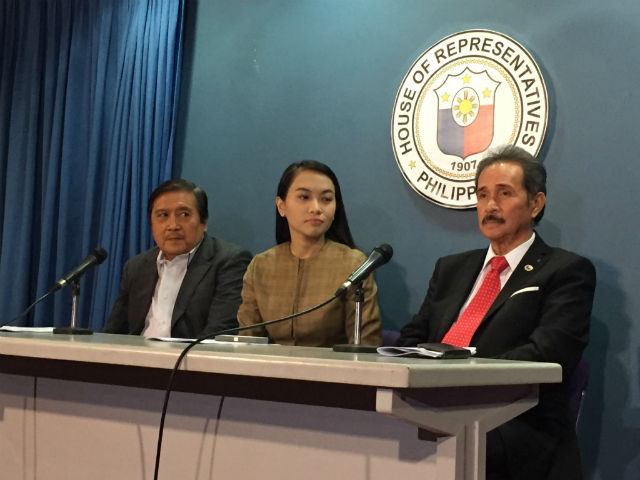 MANILA, Philippines – Three ranking legislators who are allied with President Rodrigo Duterte all agreed that no law was breached when the late strongman Ferdinand Marcos was buried at the Libingan ng mga Bayani.

Deputy Speakers Fredenil Castro and Eric Singson as well as DIWA Representative Em Aglipay-Villar said on Monday, November 21, that the Marcoses were already free to bury the former president following the Supreme Court (SC) decision that allowed the interment.

All 3 lawmakers are part of the House supermajority bloc.

Martial Law victims and other activists had urged the SC to bar Marcos’ burial at the Libingan ng mga Bayani because of the abuses that occurred during his 21-year rule. The petitions were thumbed down by the SC justices on November 8 with a vote of 9-5.

But on November 18, just 10 days after the SC ruling, the Marcos family buried the late dictator in a peaceful and private ceremony, with the plans kept secret from the public until the last minute. (READ: Behind the scenes: 12 hours to prepare for Marcos burial)

Despite the criticism against the Marcoses, Castro reasoned that the family already had the right to push through with the burial given the SC decision.

(Everyone knew that unless the SC changes its decision, former president Marcos could already be buried at the Libingan ng mga Bayani. I don’t think it was deceitful because the burial was too simple. And the simplicity was in accordance with the wishes of the Marcos family.)

Aglipay said it was the responsibility of the petitioners to file their motion for consideration at the soonest possible time.

“Since there was none… there was no obligation imposed on them (the Marcoses) to wait for an MR since the [SQAO] was already lifted,” she said.

Singson also questioned why the petitioners allowed 10 days to pass without filing their motion.

(So I’m wondering why they didn’t file the MR, the motion for reconsideration, if they really wanted to stop the burial. They had days 1 to 10 to do so. They said they would file only when the burial was done. That’s not right.)

No less than Duterte himself had promised to the Marcos family as early as the campaign season that the late strongman’s remains would be transferred from Batac, Ilocos Norte, to the Libingan ng mga Bayani. On the day of the interment, the President said in a statement that he only upheld the rule of law when he allowed a hero’s burial for Marcos.

On Monday, leaders of leftist groups asked the SC to cite in contempt the Marcos family, the Armed Forces of the Philippines, and the Department of National Defense for proceeding with the burial even as the SC decision on the matter is not yet final and executory.

Petitioner and Albay 1st District Representative Edcel Lagman also filed a motion for the exhumation of the late strongman’s remains.

But Singson doubts Lagman’s motion would be granted.

“Para sa akin, kahit sa inyo, ang patay na nailibing at pagkatapos ay i-e-exhume (For me, and even for you here, burying the dead and exhuming him or her)…It will do something that will create something very hard for the family to accept, not only the family but everyone,” said Singson.

(Filipinos do not allow their dead to just be exhumed. Burials are sacred to us. Exhumation is such a heavy burden.)

The surprise burial of Marcos on November 18 outraged his critics, who staged protests across Metro Manila the same day. Another major demonstration is in the works for November 25. – Rappler.com