PNP: Criminal charges vs Kho, protesters in US embassy dispersal 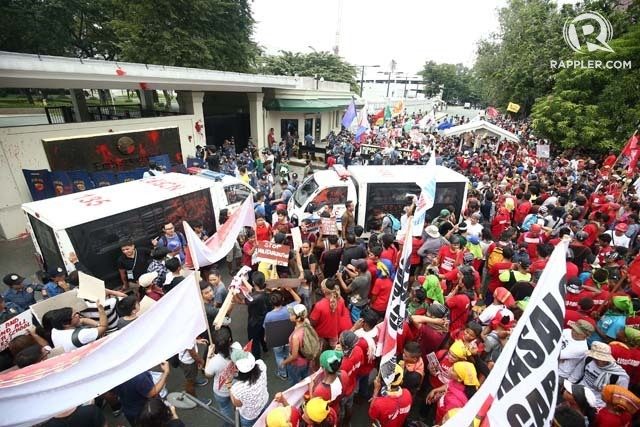 Facebook Twitter Copy URL
Copied
'Both the police and the protester groups are guilty of inflicting physical harm against each other and several of them have sustained injuries as a result,' the report says'

MANILA, Philippines – A police investigation into a controversial clash between police and protesters in front of the United States embassy has led to the filing of criminal charges against one of its own men and several leaders of leftist groups.

In a report submitted on November 14, the “Special Investigation Team” formed to probe the incident recommended the filing of physical injuries charges against Police Officer 3 Franklin Kho for driving a police vehicle back and forth through a crowd of protesters.

The report said the five “were present and… figured prominently in inducing the demonstrators to commit violent acts.”

Criminal charges were also recommended against police who were caught on video hitting a jeepney driver as they were fleeing the video. The team, however, did not identify these cops. The investigation said the victims themselves should file a case and identify the police personnel who hurt them.

“Both the police and the protester groups are guilty of inflicting physical harm against each other and several of them have sustained injuries as a result,” the report said.

It added that it was the protesters who “started” the violence but conceded that the actions of some police personnel “[had] gone out of control.”

Possible administrative charges, meanwhile, were recommended against Senior Superintendent Marcelino Pedroso Jr. and Superintendent Albert Barot for “lapses or violations” of the PNP’s operational procedures and neglect of duty.

The two officers were the overall supervisor and ground commander of the Civil Disturbance Management (CDM) team deployed that afternoon.

Another officer, Police Officer 1 (PO1) Fernando Budong, may also face administrative charges for “simple misconduct.” He brandished a lighter that looked like a gun in front of the protesters. The investigating team noted that Budong’s actions were “uncalled for.”

In its 32-page report, a copy of which was obtained by Rappler, the team said the rally, held on October 19, did not have a permit from the local government unit.

The report pinned the blame mostly on the protesters as a group, pointing out that its leaders “failed to police their unruly and violent members.” It was the protester’s initial acts – of vandalizing the Embassy facade and of aggression towards police – that prompted the CDM team to begin their dispersal.

Outside of Kho’s actions, which the report described as a “blatant disregard of the standard police operational procedures and contrary to existing laws,” police investigators said the CDM force’s use of shields, truncheons, water cannons and team gas “were consistent with the controlling principle of using the minimum necessary force.”

The team said the incident was “yet another lesson for the PNP” and emphasized the need for the National Capital Region Police Office (NCRPO) to create a permanent, well-trained and fully-equipped CDM unit ready for dispersal at all times; training for negotiators; appointment of videographers for CDM or crisis management operations; the use of drones with cameras for “high-risk” CDM oeprations; and “contingency planning” for rallies and demonstrations.

President Rodrigo Duterte had earlier said he wanted to first hear the side of the police, following criticisms from the left, whom Duterte has also forged a tentative alliance with.

It is not clear if Duterte had read the special investigative team’s report. – Rappler.com