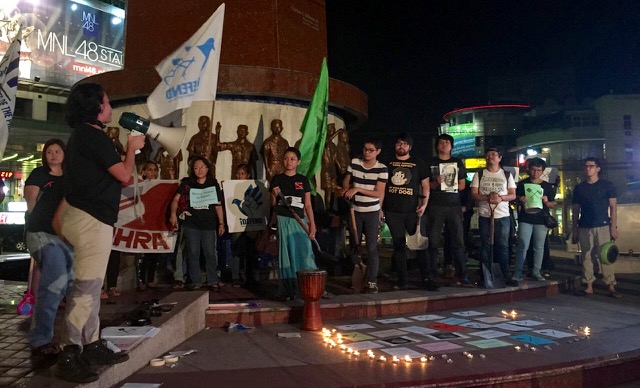 MANILA, Philippines – Social media – Facebook, especially – has proven its power in mobilizing not only groups opposing the burial of former President Ferdinand Marcos at the Heroes’ Cemetery, but those supporting it as well.

When they find themselves on the same wall or thread, however, they inevitably clash – and the recent instances have been ugly. (READ: ‘Let’s gang bang her’: Anti-Marcos protester gets rape threats)

This prompted Block Marcos, one of the groups organizing rallies to protest the surreptitious burial of Marcos at the Libingan ng mga Bayani, to call for a levelling up of discussions online.

The group, together with iDefend, held a noise barrage at the Boy Scouts monument in Quezon City on Monday night, November 21.

“Can we not also level up the discourse? Why do we resort to this kind of abuse?”

Leuch said group members had received insulting – some bordering on sexist – remarks on social media when they try to engage with the others who are supporting the burial and the Marcos family.

Still, they are staying on social media, she said, because this is how they maximized their reach in so short a time. When they found out that Marcos would be interred on November 18, they shared their information on the page, and it drove fellow protesters to the Libingan ng mga Bayani.

Now, they are using their page to reach other groups and ask them to change their profile pictures into something with a shovel and a white backdrop – their new campaign. (READ: Post-Marcos burial rage: Rallies to go on until Nov 30)

The shovel is the symbol for the call of various groups – including Akbayan and the Coalition Against Marcos Burial at Libingan ng mga Bayani – to have Marcos’ remains dug up.

“These shovels represent what the Duterte administration must do to correct the unacceptable event that happened on November 18 – the burial of a dictator, a plunderer, a human rights violator, and a mass murderer,” iDefend spokesperson Ellecer Carlos said in Filipino.

They are inviting more people who have remained low key of their opposition to join them in a series of rallies they will be holding until their grand mass action on November 30, Bonifacio Day.

Among the actions they suggest is for smaller organizations to conduct a noise barrage every 6 pm as a form of protest – just like what people who were fed up with Marcos did during Martial Law.

“Only the masses have the capacity to be the critical opposition to this administration, to push the President to do what is right,” Carlos said. – Rappler.com