Pimentel to DPWH: Why bid projects without 2017 budget approval? 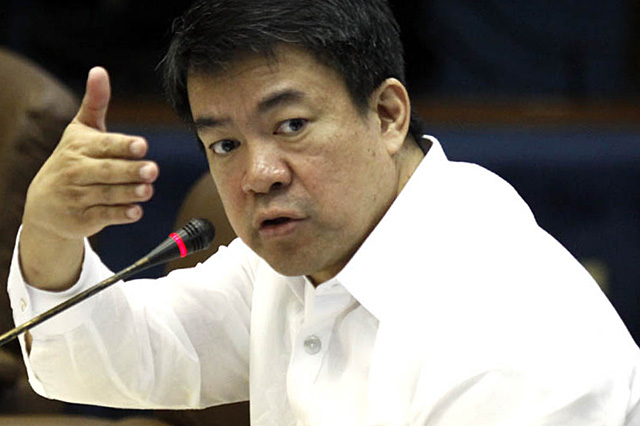 Pimentel raised alarm over the issue during the plenary deliberations of the proposed P454.2-billion budget of the DPWH on Monday, November 21.

Citing reports his office received, Pimentel said some district engineers and regional directors have supposedly started bidding out projects under the proposed General Appropriations Act of 2017 which has yet to be signed into law.

“How can you possibly bid a project right now when there is still no law appropriating funds for that project? A bill is not a law,” Pimentel said.

“Aren’t they treating the Congress’ role in the budget-making process as mere formality? Na wala na palang magbabago diyan? (That nothing will be changed in the bill?) So we are just strengthening the rule of law concept; as well as of course, reminding them that Congress has a role in the budgeting process,” he added.

At present, the bill is being deliberated by both houses of Congress. Once the two chambers pass their respective versions of the budget bill, the Senate and House bicameral conference committee will hammer out a final version of the bill to be submitted to the President for approval.

The General Appropriations Act only comes to force after the President – who may opt to veto some provisions in the final budget bill – signs it. Only then would the projects funded under the budget law be deemed officially approved.

Citing the budget process, Pimentel questioned DPWH officials led by Secretary Mark Villar on how a proposed project could be implemented even if it has not yet been approved.

“Ako po’y nababahala dito kasi hindi pa po ito law. Ito po’y bill at pinaguusapan ngayon (I’m alarmed by this because this is still not a law. This is still a bill that is being deliberated on). So what is now the legal basis for bidding out projects anticipated to be part of a law but not yet officially part of a law?” he said.

“Kung may tara sa Bureau of Customs, meron din palang obligasyon sa DPWH (If there is tariff in the Bureau of Customs, there is also an obligation in the DPWH),” said Pimentel in a separate statement, referring to the “grease money” paid by “handpicked winning contractors to their connections” at the agency.

The Senate leader pressed Villar to quickly investigate the reports and stop the scheduled biddings “to break the backbone of graft and corruption” in the agency which is prone to allegations of irregularities.

He also urged Villar to fire erring DPWH officials and file charges against them.

Villar is the son of Senator Cynthia Villar, who openly supported her partymate, Senator Alan Peter Cayetano, in seeking the Senate presidency against Pimentel.

Senator Loren Legarda, sponsor of the DPWH budget as the Senate finance committee chairperson, defended the agency, saying this was the practice even in the previous administration to “speed up” processes.

Senator Juan Miguel Zubiri, a known Duterte ally, cited “practical concerns” in the practice of implementing proposed projects despite the absence of the implementing law.

Zubiri said that if the projects are bid out in the first quarter of the year, or after the signing of the budget law, the projects could only be implemented by the second quarter or the onset of the rainy season.

Senate President Pro-Tempore Franklin Drilon even likened it to the Priority Development Assistance Fund or pork barrel, which the Supreme Court had struck down as unconstitutional. – Rappler.com