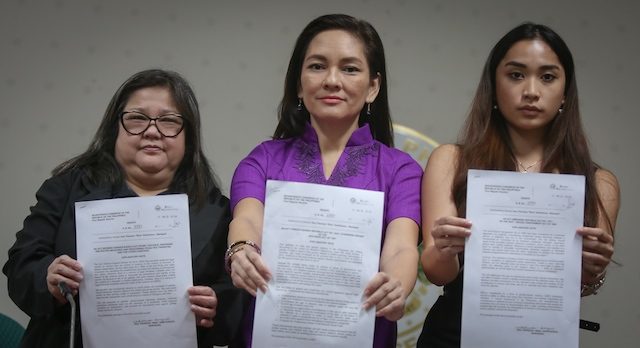 Hontiveros called the proposed measures the “Tres Marias” bills: Senate Bill No. 1251 which seeks to punish those behind misogynistic and homophobic attacks on social media, SB 1252 or the Anti-Rape Act, and SB 1250 or the Anti-Sexual Harassment Bill. (READ: Violence against women: Sex, power, abuse)

In filing SB 1251 or the gender-based electronic violence (GBEV) bill, the senator expressed alarm over the growing number of sexual harassment against women online, citing the case of Vice President Leni Robredo, who was the subject of a nasty pregnancy rumor. (READ: The many faces of sexual harassment in the PH)

Hontiveros also mentioned the case of student Anne Nicole de Castro, who joined her in a press conference on Tuesday. De Castro was sexually harassed online after a photo of her in a protest rally against the hero’s burial for late dictator Ferdinand Marcos went viral on social media. (READ: ‘Let’s gang bang her’: Anti-Marcos protester gets rape threats)

“It’s time to interrupt and end the culture of rape and male sexual violence. We will bring the fight to our very homes, workplaces, and the Internet. We will give no quarter to misogyny and sexism. We will not allow the gross and blatant disrespect, sexual assault and objectification of our women and children to continue to take safe refuge in our communities,” Hontiveros said.

Hontiveros, who chairs the Senate committee on women, children, family relations and gender equality, pointed out that the victims of misogynistic and homophobic attacks online are usually the youth, whose primary outlet of expression is social media.

“The attacks have the effect of silencing this expression, and contributing to a culture of misogyny and hate,” she said.

Under SB 1251, misogynistic and homophobic attacks online fall under GBEV.

The bill defines GBEV as “acts involving use of any form of information and communications technology which causes or is likely to cause mental, emotional or psychological distress or suffering to the female victim or lesbian, gay, bisexual, transgender, queer (LGBTQ) victim, and tending to disparage the dignity and personhood of the same on account of his or her gender.”

Some of the violations are:

SB 1252 seeks to amend and modernize current anti-rape laws. The bill seeks to deem the use of video recording or an electronic device during the commission of the rape as an aggravating circumstance.

SB 1250, meanwhile, seeks to amend current legislation by introducing sexual harassment between peers and those committed to a superior officer by a subordinate, or to a teacher by a student, or to a trainer by a trainee. – Rappler.com