PH, U.S. militaries assure each other of ‘continued robust relations’ 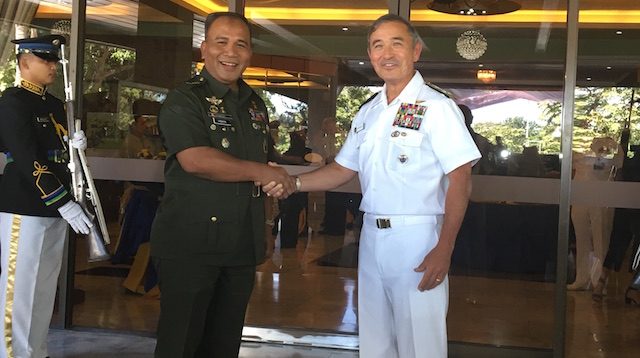 Facebook Twitter Copy URL
Copied
The MDB-SEB meeting is convened for the first time after the electoral victories of Philippine President Rodrigo Duterte and US President-elect Donald Trump, both with issues against the other country

MANILA, Philippines – The Philippine and US military chiefs on Tuesday, November 22, assured each other of continued and “robust” relations in a meeting held at the Philippine military headquarters in Camp Aguinaldo.

The annual Mutual Defense Board and Security Engagement Board (MDB-SEB) was convened for the first time after the electoral victories of Philippine President Rodrigo Duterte and US President-elect Donald Trump, both with issues against the other country.

“The successful completion of the MDB-SEB ensures continued, robust relations between the US and Philippine militaries,” reads the joint statement of the Philippine and US military chiefs released after the meeting.

The MDB-SEB is convened annually to plan and set the new direction of joint military exercises. It was co-chaired by Armed Forces chief General Ricardo Visaya and US Pacific Command chief Admiral Harry Harris Jr.

“This highlights the enduring commitment of both countries to the US-Philippine alliance. We look forward to continued close cooperation in areas central to both our national and security interests, including humanitarian assistance and disaster relief, counterterrorism, cyber security, and maritime security,” the statement added.

Duterte had threatened to end war games with the US altogether, but a compromise was reached after Defense Secretary Delfin Lorenzana presented the benefits of continued cooperation. (READ: PH, US war games to continue; EDCA to be implemented)

The details of what was agreed upon during the meeting has not been released, however, but sources confirmed the Philippine-US Amphibious Landing Exercises (Phiblex) and Cooperation Afloat Readiness and Training (CARAT) have been scrapped. – Rappler.com