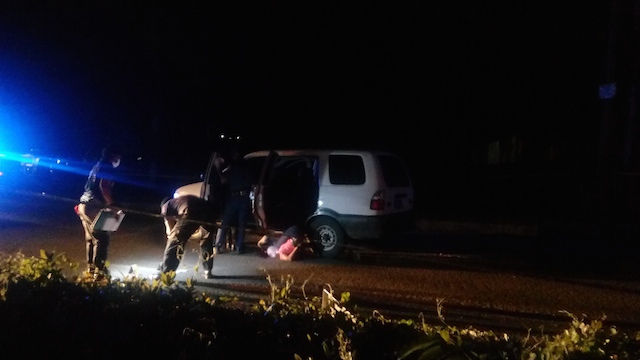 DIPOLOG CITY, Philippines – Armed men killed a suspected drug-pushing couple as the two were being transported by police and a Philippine Drug Enforcement Agency (PDEA) agent to a crime laboratory Monday night, November 21.

Alleged gun-for-hire Crisanto Gulang and his live-in partner, Jeanette Acevedo –who were arrested on November 19, had promised to tell everything about the unexplained killings and the illegal drug trade in Zamboanga del Norte.

The two were said to be Dipolog City employees.

PDEA provincial agent Jury Rocamora and 5 police escorts were bringing the suspects to the crime laboratory from the Dipolog City Police Office for their supposed drug test past 8 pm on Monday, when about 12 armed men with bonnets flagged down their vehicle less than a hundred meters from the destination.

“It was quick. They [armed men] told us to get out, then gunshots followed. They were only after Gulang and Acevedo. We were not able to react,” said Rocamora, who was driving the PDEA vehicle.

According to the police blotter, Gulang and Acevedo suffered multiple gunshot wounds and were declared dead-on-arrival at the  Zamboanga del Norte Medical and the Corazon Aquino Memorial Hospital, respectively.

Gulang and Acevedo were arrested on Saturday but police only told Rappler about the arrest on Monday morning, November 21.

Following their arrest, the two suspects had sent feelers through their relatives to Zamboanga del Norte 1st District Representative Seth Frederick Jalosjos, to help them enter the government’s witness protection program. In exchange, they would reveal everything they knew about the unexplained killings and illegal drug trade in the province.

Jalosjos, due to return from the United States on November 24, had earlier called on the House committee on dangerous drugs to investigate the illegal drug trade in the province that allegedly involves politicians and police officials.

On Monday,  Dipolog City Assistant Information Officer Eleonor Ruiz-Rabino told Rappler that Gulang was a member of the city’s Team Deployment Against Vices in Dipolog (DAVID) which was disbanded last year, while Acevedo was with the disaster reaction group.

On Tuesday morning, however, Dipolog City officials – including Rabino – categorically denied that Gulang was ever hired to join Team DAVID. – Rappler.com