#ThankYouStScho: ‘Please do not underestimate the youth’

Nov 22, 2016 10:00 PM PHT
Paige Occeñola
Facebook Twitter Copy URL
Copied
Students of St Scholastica's College get criticized for joining the outcry against the Marcos burial, but they assert that they must continue fighting for what they believe in 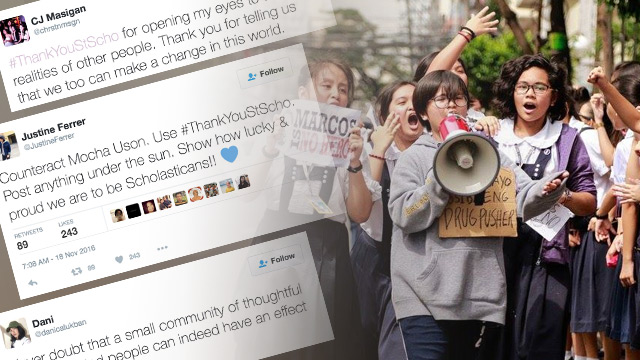 MANILA, Philippines – Students were among the first to take to the streets shortly after the surprise burial of the late dictator Ferdinand Marcos at the Libingan ng mga Bayani. In Quezon City, thousands of students from different universities made their voices heard.

As news of protests across Metro Manila spread on social media, a group of young girls clad in their alma mater’s signature navy blue and white caught the eye of celebrity blogger Mocha Uson.

In a Facebook post, Uson questioned why it was necessary for the students to join the protests in the first place.

(This isn’t about Marcos, Duterte, or Aquino. It’s possible the students know the issue but they shouldn’t be doing this in the streets, and if we really want our children to be patriotic we can teach them history inside school.)

Commenters on Uson’s post agreed with her, calling out the school for “child abuse” and for “forcing” the students to rally.

The students also received flak as photos of them protesting were shown online.

Eighth grader Shibby Lapeña De Guzman is one of the students who participated in the protest. In one photo she is seen holding a megaphone, wearing a sign she has worn before: “Lahat tayo posibleng drug pusher.” (All of us could be drug pushers.)

According to Shibby’s mother, Melay Lapeña, an alumna of St Scholastica’s College (SSC), the students and parents were not forced to participate. A circular had been issued the day before, requesting that parents allow their children to attend the noise barrage to protest the Supreme Court decision on Marcos’ burial. 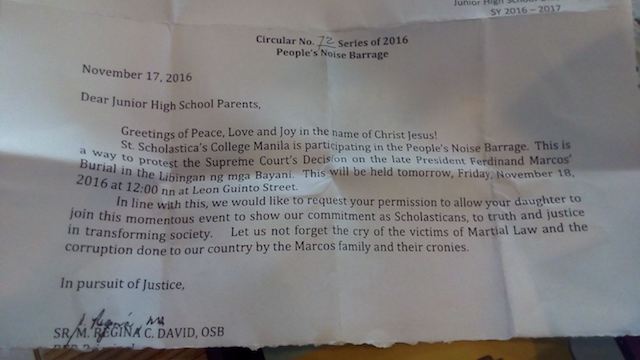 “SSC always informs parents about activities, whether on- or off-campus. Off-campus activities always require parental permission, and in the case of protests, parental permission does not automatically mean the student must join. Those who do not wish to join may do so, and the school respects that,” Melay said.

“Protests are not required, nor graded, and the students are definitely not paid. They have no bearing on the students’ academic standing. The school issued a circular with a reply slip the day before, and my daughter and I discussed the activity before I signed it,” she added.

For Melay, it’s important that her daughter asks questions and explores issues.

“I allowed her to join because it is her right. I encourage her to explore issues – not just this one, to ask questions and to seek answers, to form her own opinions, and to take action. I am aware of the risks involved in joining protests, and I believe they are risks worth taking. Also, I went to the school and joined the students in the protest.”

Shibby has also defended herself amid the criticism. To one Facebook commenter, she replied: “Please do not underestimate the youth. We completely know and understand the injustice we are protesting against.”

In a separate post, Shibby clarified her stance, saying she’s not necessarily for or against any specific personality. “I’m pro-country.”

Shibby and her mom aren’t new to being on the receiving end of backlash on social media.

Last July, Shibby went to school wearing the same “drug pusher” sign to raise awareness of extrajudicial killings. This sign went viral and she was called to the assistant principal’s office. After Shibby explained her side, she was allowed to wear the sign and encouraged to come up with more ideas to shed light on the issue.

“This is not the first time a photo of her has gone viral, and having experienced it previously, we knew there was going to be backlash. That is included in the risks of being heard. Her posts have become a venue for discussion – some healthier than others – and that can be good, too. There have been several particularly hateful comments, but there are also people who are defending the students, such as a group of lawyers and SSC alumnae who monitor the posts. These students are speaking up for their beliefs, despite being attacked,” said Melay.

Several members of the Scholastican community have spoken up in defense of the school and the students. Those outside of the community who caught wind of the backlash have also expressed support.

Never doubt that a small community of thoughtful and committed people can indeed have an effect to change the world. #ThankYouStScho pic.twitter.com/DTJHUos2IM

#ThankYouStScho for opening my eyes to the realities of other people. Thank you for telling us that we too can make a change in this world. pic.twitter.com/8X78wRbrLf

#ThankYouStScho for realizing that kids are actually political. Thank you for not brainwashing them with nothing-ness or revisionism

“I hope I have a daughter. I know exactly where she’s going to school. Kahit mamulubi pa ako.” — My brother on St. Scho #ThankYouStScho

St Scholastica’s participation in the protests did not come as a surprise to some, since members of the Benedictine Order also joined the People Power Revolution to oust Marcos. (WATCH: Sr Mary John Mananzan reacts to youth’s views on People Power) – Rappler.com