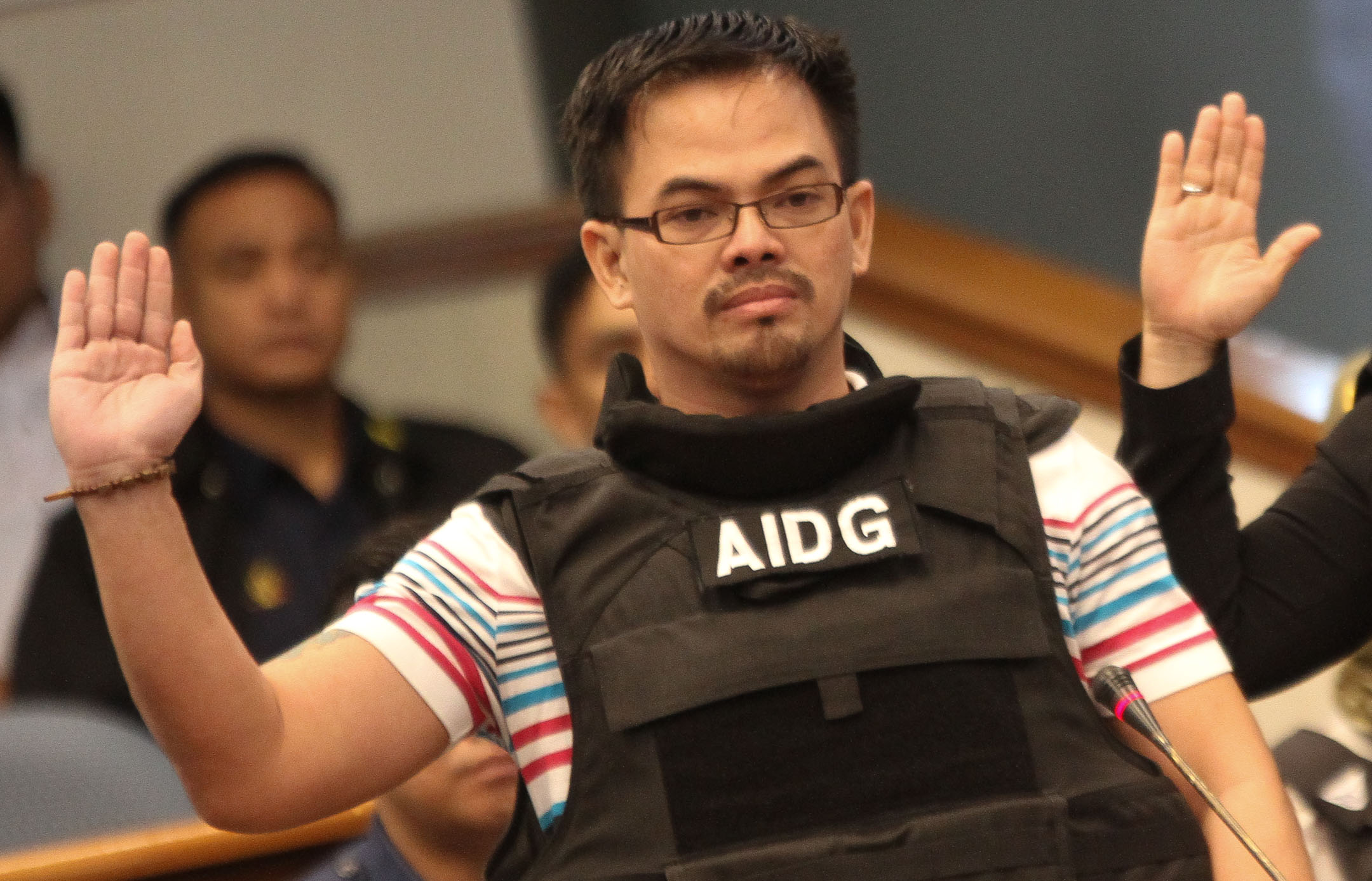 MANILA, Philippines (3rd UPDATE) – He was the police chief who relentlessly chased after an alleged drug lord and his father-protector but according to Kerwin Espinosa, it was Chief Inspector Jovie Espenido himself who apparently acted as his supposed link to Senator Leila de Lima.

‪In a 27-page affidavit executed before the Philippine National Police (PNP), alleged Eastern Visayas drug lord Espinosa said that in the first or second week of August 2015, Espenido contacted him to say that a “driver/security aide” of De Lima, then justice secretary, wanted to talk to him. ‬

‪In the affidavit, however, Espinosa is not asked to confirm if the “Juvi Espinido” named in the affidavit is the same Espenido who now heads the Albuera police office.

Espinosa is the key witness in a Senate probe into the death of his father, the late Albuera mayor Rolando Espinosa Sr, who was killed inside his jail cell after a supposed shootout with police serving a search warrant.

‪Espinosa further pinned down Espenido, claiming that the Albuera police chief took CCTV footage that would prove he transacted with another cop, Superintendent Marvin Marcos. He said he handed over the money to Marcos just outside his hotel in Albuera. (READ: Kerwin Espinosa: Cop who led operations vs dad asked for P3M)

‪Speaking to media on the sidelines of the hearing, Dela Rosa said he got “advanced info” of Espenido’s supposed involvement in illegal drugs, after police officials first went to Abu Dhabi to facilitate Espinosa’s arrest.

Espinosa said his father was “innocent” and had no links to the drug trade but Espenido allegedly included him in the local drug list because of a personal grudge. He said that his father eventually learned about his illicit trade but “could not control” him.

““Hanggang ngayon ay nagtatanim siya ng galit sa akin at sa aking pamilya (Until now, he is angry at me and our family),” added Espinosa. ‬

Asked to respond to the allegations, Espenido denied the claims and said he had always fought illegal drugs, illegal gambling, illegal fishing, and private armed groups in every area he has been assigned to.

“Sino ang nagsabi [ng alegasyon]? Ano ang credibility ng nagsabi (Who made the allegation? What is the credibility of this person)?” he added.

Espenido said that in his long years in the police force, he “never received a single centavo” from illegal operations.

Responding to questions by Senator Richard Gordon, Espinosa confirmed that he never gave drug money to Espenido, citing their differences, and that Espenido was known not to accept bribes.

Espinosa is a key resource person of the Senate committee on dangerous drugs and public order as well as committee on justice and human rights, which are jointly conducting the inquiry. (READ: Senate probe: What secrets will Kerwin Espinosa spill?)

The alleged drug lord had been in hiding abroad for several months until he was nabbed by authorities in Abu Dhabi, in coordination with Philippine police, last October. He was brought back to the country on November 18.

Dela Rosa earlier said that Espinosa – said to be the top drug lord in Eastern Visayas with operations in Central and Western Visayas – was the “missing piece in the puzzle” of the illegal drugs trade.

Espinosa had supposedly promised to “tell all” at the Senate inquiry, including his alleged government protectors. – Rappler.com