Nov 24, 2016 3:14 PM PHT
Rappler.com
Facebook Twitter Copy URL
Copied
'We are inspired by the outpouring of protest by the youth who give life to our hope for generations of heroes who are the antithesis of everything that was Marcos,' say members of the 1986 Constitutional Commission 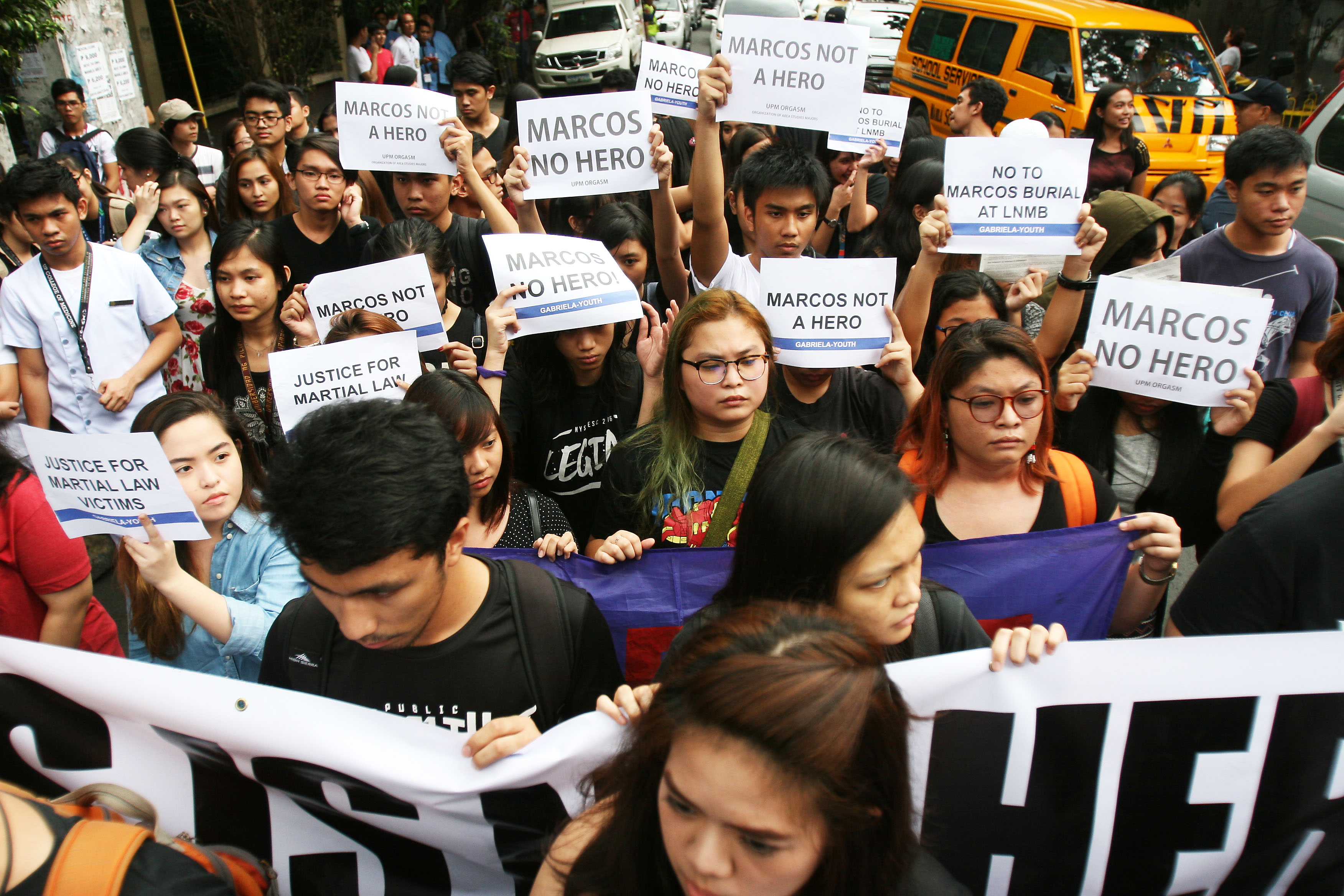 MANILA, Philippines – Surviving members of the commission that drafted the 1987 Constitution on Thursday, November 24, condemned the secret burial of the late dictator Ferdinand Marcos at the Libingan ng mga Bayani.

“We condemn the burial of the dictator Marcos in the Libingan ng mga Bayani, in shameless treachery, in disregard of the facts of history, in contempt of the grief and sufferings of the bereaved victims of martial law, and in defiance of the hopes of our people and their children to build a future based on the values of truth, justice, respect for human rights and caring for others,” members of the 1986 Constitutional Commission said in a statement.

They said the 1987 Constitution was drafted following the overthrow of the Marcos dictatorship, which ended a 21-year rule marked by corruption and human rights abuses. (READ: Marcos years marked ‘golden age’ of PH economy? Look at the data)

“The Constitution was written after nationwide consultations with a sovereign people whose valiant resistance to ruthless dictatorial rule and vision of a new social order are inscribed in its provisions,” they said.

“The heart of the Constitution underscores in no uncertain terms: the primacy of human rights, the promotion of social justice in all phases of national development, strict adherence to the rule of law and never again to any form of authoritarianism. It envisions a different future from the Marcosian nightmare of greed, intolerance, brutality and disrespect for democratic institutions,” they added.

They noted that the EDSA People Power Revolution “deposed a tyrant whose greed was boundless and whose cruelty was criminal to countless victims who were detained arbitrarily, tortured, made to ‘disappear’ and ‘salvaged’ during the martial law years.” (READ: Were it not for Marcos, Filipinos today would be richer)

They said they draw hope and inspiration from the strong voice of the youth in protesting the hero’s burial for Marcos.

“We are inspired by the outpouring of protest by the youth who give life to our hope for generations of heroes who are the antithesis of everything that was Marcos,” they said.

Groups opposed to Marcos’ burial at the Heroes’ Cemetery have held protest rallies since November 18, the day of the controversial interment. They said President Rodrigo Duterte is accountable for what they described as an “insult” to the victims of the Marcos regime as he allowed it. (READ: Youth leaders to Duterte: Shame on you for ‘cleaning Marcos’ image’)

The anti-Marcos protest will culminate in two big rallies: one led by the Campaign Against the Return of the Marcoses in Malacañang (Carmma) in Luneta on November 25, and another by the Coalition Against Marcos’ Burial at the Libingan ng mga Bayani (CAMB-LNMB) at the People Power Monument on November 30.

Here is the full statement of the Framers of the 1987 Constitution: