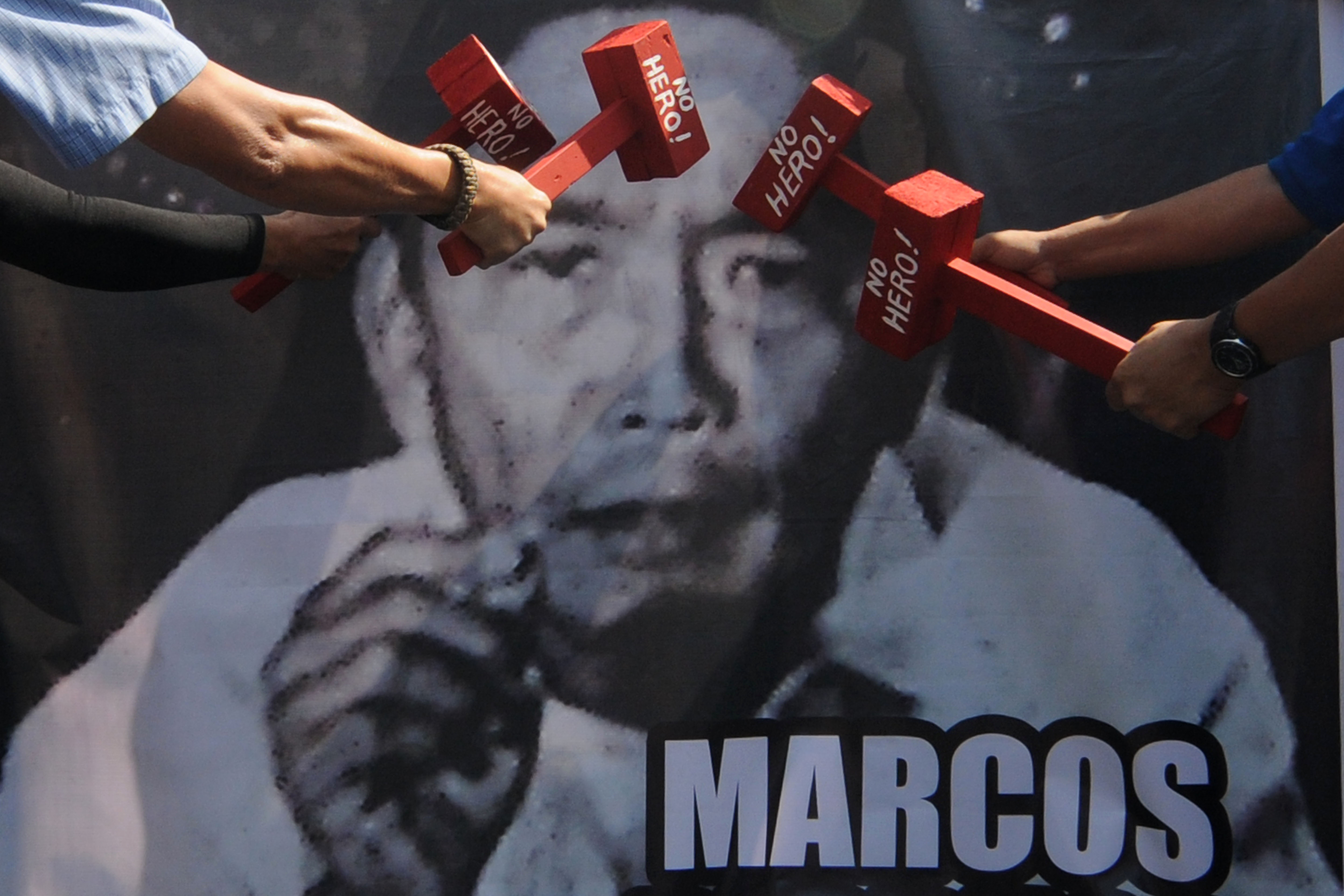 MANILA, Philippines (2nd UPDATE) – Groups from Luzon to Mindanao have begun holding rallies Friday morning, November 25, in a show of national unity to protest the burial of dictator Ferdinand Marcos at the Libingan ng mga Bayani.

The National Day of Rage and Unity will culminate in a grand rally at 4 pm at the Luneta in Manila, organized by the Campaign Against the Return of the Marcoses in Malacañang (Carmma), together with youth and student organizations. (READ: November 25 Luneta grand rally: What you should know)

An Ilocano Martial Law victim speaks in an anti-Marcos protest in Cagayan: Haan a bannuar ni Marcos (Marcos is not a hero) @rapplerdotcom pic.twitter.com/BuNy6ghh6y

Kabataan Representative Sarah Elago, who will join youth and student groups in their march to Luneta from Mendiola on Friday afternoon, said on Friday that youth groups want to hold Duterte accountable not only for his role in rehabilitating the image of Marcos, but also for continuing “state fascism.”

“We see the burial of the late dictator at the Libingan ng mga Bayani not only as an affront to the history and struggle of the Filipino people but also as a manifestation of the Duterte administration’s growing penchant for perpetuating state fascism,” Elago said.

“Rehabilitating Marcos’ image – turning him from zero to hero – is tantamount to endorsing gross human rights abuses, the grave disregard of civil liberties, and propagating state terrorism,” she added.

Bente Uno Coalition, which calls itself a non-partisan movement of student and youth groups, will hold a rally at the People Power Monument at 4 pm in support of the Black Friday protest. It said in a statement that it expects about a thousand students and youth leaders from different schools in Metro Manila to join the group.

“We feel the need to reawaken the youth and break free from the darkness of Martial Law. It is now more than ever that we must unmute the youth and hear their voices as they call for genuine change by exacting accountability from those who abused their power and left nothing but suffering for the Filipino people,” Bente Uno spokesperson Christian Gultia said in a statement.

Personalities opposed to the burial have lauded the active participation of the youth in protest rallies against Marcos, whose rule they did not experience. (READ: Framers of Constitution condemn Marcos burial, draw hope from youth)

On the eve of the rally, Malacañang reiterated the assurance of President Rodrigo Duterte that protesters are free to air their grievances anywhere, “for as long as they want,” without need for rally permits.

Philippine National Police chief Director General Ronald dela Rosa said the police will exercise maximum tolerance at the rallies, which was sparked by the surprise burial of the late president at the Libingan ng mga Bayani on November 18.

Critics of the burial – which elevated as a “hero” a despot who plundered the nation and sanctioned human rights atrocities during his 21-year rule – have also called out Duterte, who allowed the burial to fulfill a campaign promise to the Marcoses; and the Supreme Court for voting in favor of the state interment. (READ: Were it not for Marcos, Filipinos today would have been richer)

In its invitation to join the grand rally posted on its Facebook page on November 21, Carmma said: “The rally is being organized to provide a venue for our collective indignation, to show those in power that the fight does not end with the interment of the dictator’s remains. It is also an educational and cultural event, a coming together of different generations, all longing for real change.”

“Let us reject Duterte’s alliance with the Marcoses that is aiding the rehabilitation of the dictator and the return of his heirs to Malacañang. Let us hold accountable the Supreme Court for insulting the victims of the dictatorship and for obfuscating the crimes of the dictator,” it added.

On November 30, Bonifacio Day, the Coalition Against Marcos’ Burial at the Libingan ng mga Bayani (CAMB-LNMB) will hold another protest rally. It will be held at the symbolic People Power Monument which was erected to commemorate the EDSA People Power Revolution that ousted Marcos. (READ: Post-Marcos burial rage: Rallies to go on until Nov 30) – Rappler.com

Stories from the November 25 rallies:
From Manila