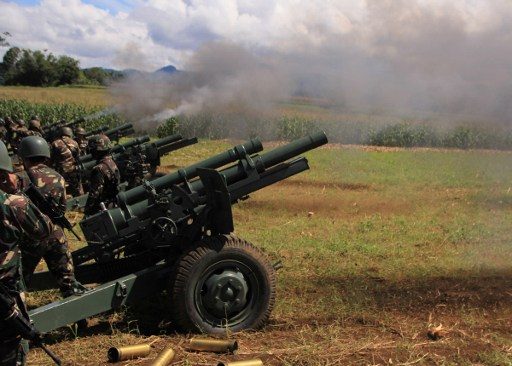 Facebook Twitter Copy URL
Copied
'The mission is to flush out the group and neutralize the enemies and to bring back normalcy to the area,' says military spokesperson Major Filemon Tan

MANILA, Philippines – The Philippine military launched on Monday, November 28, an offensive to take back control of Butig town in Lanao del Sur, where members of the local Maute terror group have occupied the abandoned town hall and nearby buildings.

Troops from the Joint Special Operations Group (JSOG) – the same team of elite soldiers that was sent to respond to the Zamboanga siege in 2013 – have joined the operations of the Army’s 103rd Brigade, said Major Filemon Tan, spokesperson of the military’s Western Mindanao Command (Westmincom).

“Yes, [we started the offensive] at dawn today. The mission is to flush out the group and neutralize the enemies and to bring back normalcy to the area. Before we can achieve that, there will be a series of operations,” said Tan.

The Maute terror group sympathizes with the Islamic State (ISIS) that seeks to establish a caliphate. On Thursday, November 24, the local terror group occupied Butig’s abandoned town hall and reportedly raised the black flag of ISIS.

The town hall is located in an area where the Maute family and their relatives live. After the 2016 elections, the new municipal government decided to relocate its offices to the National Irrigation Administration (NIA) building.

On Sunday, November 27, the military claimed 11 members of the local terror group were killed in the operations.

The Maute group is one of several armed organizations in Mindanao which have pledged allegiance to ISIS fighters in Iraq and Syria.

In past fighting with troops, the group’s members were seen carrying black ISIS flags and bandanas bearing the jihadists’ insignia were found in their base, the military said.

Residents of Butig, which has a population of 16,000, fled after the old town hall was occupied.

Government forces captured a Maute training camp in the town in June after a 10-day gun battle that left 4 soldiers and dozens of militants dead, according to an army account.

The Mautes, once described by the military as a small-time extortion gang, attacked a remote army outpost in Butig in February, triggering a week of fighting that the military said left 6 soldiers and 12 militants dead.

The group also beheaded two employees of a local sawmill in April, according to the military. – with reports from Agence France-Presse / Rappler.com