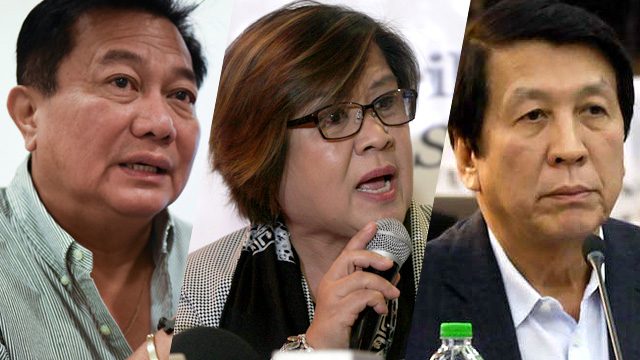 MANILA, Philippines – The top leaders of the House of Representatives are considering issuing an arrest warrant or filing several complaints against Senator Leila de Lima should she fail to explain if she had truly barred her former security aide and alleged bagman from testifying before the House justice panel.

Speaker Pantaleon Alvarez and Majority Leader Rodolfo Fariñas said in separate interviews on Monday, November 28, that the committee on justice may cite the embattled senator for contempt and order her arrest if she ignores the show cause order set to be issued against her.

De Lima may also face a contempt case to be filed before the Quezon City Regional Trial Court (RTC), a disbarment case before the Supreme Court (SC), or an ethics complaint before the Senate ethics committee, they said.

This comes after De Lima’s former driver and bodyguard Ronnie Dayan told lawmakers in a hearing last week that he was advised by his ex-boss to snub the justice panel’s subpoena for him to attend the October 6 hearing on the narcotics trade inside the New Bilibid Prison (NBP).

The panel already found “sufficient evidence” against De Lima regarding the proliferation of drugs inside the NBP. Dayan supposedly acted as her bagman for prison drug lords, a charge he denied when he finally showed up in front of the justice committee on November 24. (READ: A can of contradictions in Ronnie Dayan’s testimony)

According to Alvarez, De Lima had violated the longstanding tradition of inter-parliamentary courtesy – wherein both houses of Congress do not interfere with each other’s affairs – by preventing Dayan from testifying.

“We conducted the hearing on the illegal drug trade in the New Bilibid Prison. We invited her. She declined so [taking into consideration the] parliamentary courtesy, okay lang ‘yun (that’s okay). Meron kaming sinubpoena na (We issued a subpoena against a) witness because his name was always mentioned in the hearing, si Dayan. And then, she advised Dayan not to attend and to hide. Is that parliamentary courtesy?” Alvarez told ANC’s Headstart.

(This is an offense to the institution. We respect the Senate. We have no issue with that. But one member of the Senate should not interfere with the legitimate proceedings of the House!)

The justice committee has yet to issue the show cause order against De Lima, but once it has been issued and De Lima ignores the order, Alvarez said he would approve an arrest warrant for her.

“It’s up to the committee. Ngayon (Now), if the committee will request for the issuance of a warrant of arrest, I think I will issue it,” said Alvarez.

Fariñas, however, said he was hoping the House will no longer see the need to issue an arrest warrant against De Lima to avoid a “collision” with the Senate. (READ: Pimentel to House: Do your job first before telling us what to do with De Lima)

If it were up to him, he would recommend that criminal contempt charges against De Lima be filed instead before the Quezon City RTC.

(The committee has the power to penalize acts of contempt. But to avoid a collision with the Senate, we will just file a criminal complaint for contempt before the RTC.)

He said another option is to ask the SC to disbar the senator, a bar topnotcher.

“Another thing that we could do is file a case in the Supreme Court dahil member of the bar siya, officer of the court ‘yan. She should not advise for a person to be a  fugitive of justice or to go in hiding! Sasabihin niya dapat dun sa tao, ‘Pumunta ka dun. Halika! Ipagtanggol kita doon. I will protect your rights,’ o ‘Pasasamahan kita ng abogado mo,'” said Fariñas.

(Another thing that we could do is file a case in the Supreme Court because she’s a member and an officer of the court. She should not be advising a person to be a fugitive or justice or to go in hiding. She should be telling him, “Go there. Come on! I’ll defend you there. I will protect your rights,” or “I’ll ask a lawyer to go with you.”)

Fariñas added that a complaint against De Lima’s “disorderly behavior” may also be filed before the Senate ethics committee.

“Sabay-sabay ‘to, cumulative, puwedeng gawin lahat ng ito (We can file these at the same time) – and most probably we will do that, we will file a complaint against her in the ethics committee for disorderly behavior,” said Fariñas.

(Contempt is all about the power of preservation. It’s like a self-defense power so people would respect the processes of an entity.)

De Lima had previously tagged the House inquiry into the NBP drug trade as a “spectacle” full of lies supposedly designed by President Rodrigo Duterte and his allies to destroy her. – Rappler.com