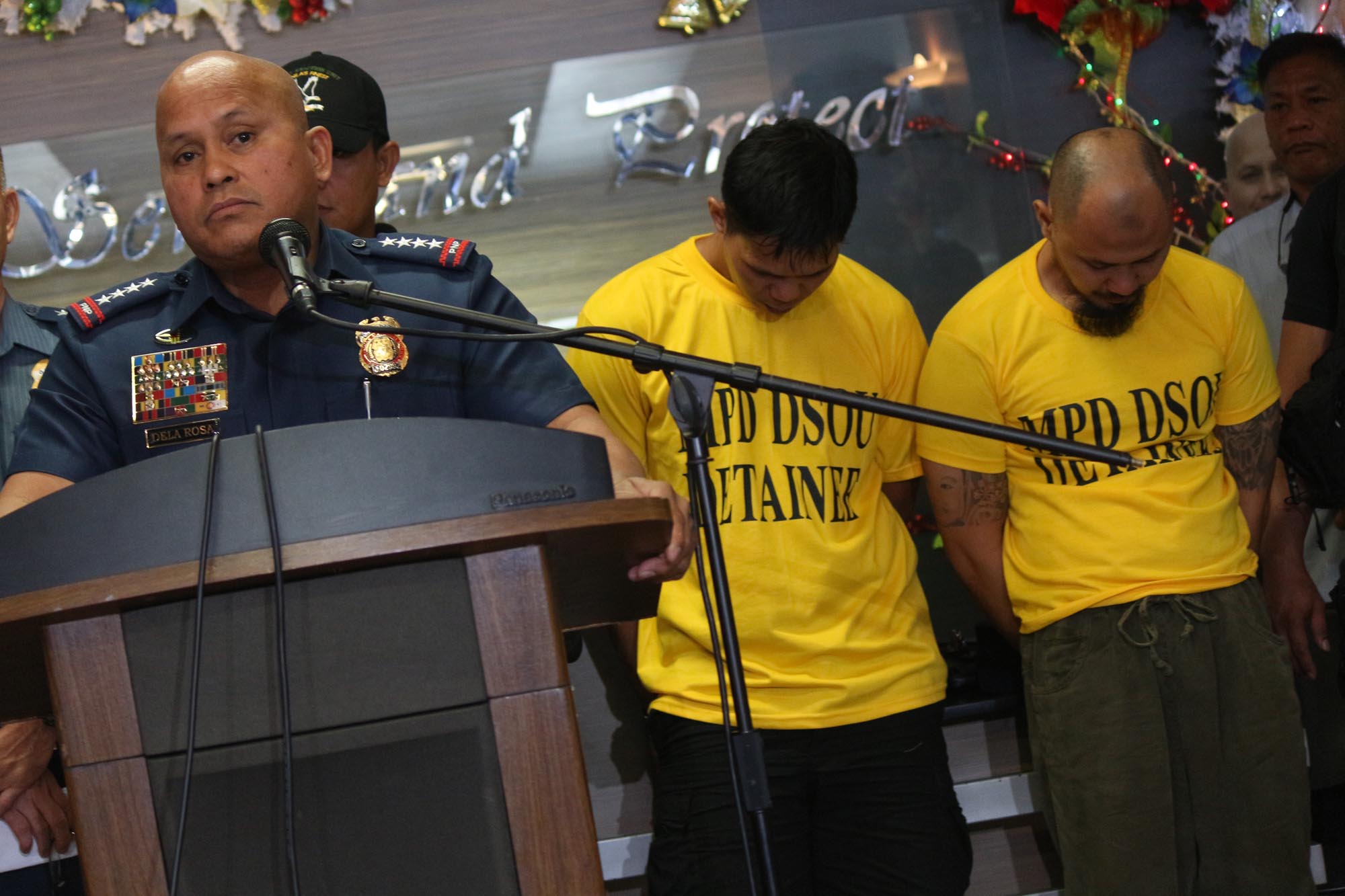 Dela Rosa made the announcement in a news conference at Camp Crame, where he presented two suspects in the alleged attempt to plant an improvised explosive device (IED) near the United States embassy in Manila.

Asked what the terror level alert means, Dela Rosa said it’s “police terminology” and urged the public to be vigilant.

PNP spokesperson Senior Superintendent Dionardo Carlos explained that under the Terror Threat Advisory System of the Anti-Terrorism Council, an area is placed under Threat Level 3 “when a terrorist attack is a strong possibility within a short period of time.”

Dela Rosa said, however, that there’s no need to panic at this point.

“Alert lang tayo (Let’s just be alert). I’m advising the public to be vigilant, to be alert, to be cautious, but don’t panic. Relax. Enjoy your Christmas,” the PNP chief said.

He said checkpoints around the country, which President Rodrigo Duterte had earlier ordered removed, will be restored. (READ: Police checkpoints 101: How do checkpoints work?)

The country is still under a “state of national emergency on account of lawlessness” following the Davao City blast which claimed the lives of at least 15 people. The Maute terror group is held responsible for the Davao incident.

The IED discovered along Roxas Boulevard was reportedly the same as the one used in the Davao blast, police had earlier said, leading them to suspect that the Maute group could be behind it as well.

One of the suspects was caught in Caloocan City on Tuesday and the other, in Bulacan on Wednesday. That suspect was said to be the one who planted the IED near the US embassy. Police initially refused to tag them as suspects, pending further investigation.

Asked what people would see on the ground because of “terror alert level 3,” Dela Rosa said there will be “strong checkpoints” and the conduct of “Oplan Sita” or checkpoints nationwide. Police will also be conducting “raids” on “lairs of suspected terror groups.”

Immediately after Dela Rosa’s announcement, people online expressed apprehension over the declaration, saying it would lead to the suspension of the privilege of the writ of habeas corpus or the declaration of martial law. President Rodrigo Duterte earlier said he was considering the suspension of the writ, which would allow security forces to conduct warrantless arrest.

“Please do not expect that to happen. We do now have plans, that’s far from our minds. We will just make sure that [no acts of terror] happen again. We’ll make sure nothing gets past us,” Dela Rosa said.

The PNP chief said the IED found near the US embassy was among the triggers, but added that the National Intelligence Coordination Agency (NICA) also had “basis” for it.

“They do all the threat level assessments. We just follow what they say. But the alert level 3 is sure,” he said.

In December 2015, the PNP placed under threat level 3 parts of the Zamboanga peninsula, the Autonomous Region in Muslim Mindanao, Palawan, and Boracay following reports that the Abu Sayyaf Group and the Bangsamoro Islamic Freedom Fighters would launch bomb attacks and kidnap for ransom activities in those areas.

Asked if the recent terror threats had links to the ongoing war on drugs, Dela Rosa said based on his “personal feeling [and] gut feel,” it was.

“I don’t want to state that this as an official stand of the PNP and government but if you want to ask me personally, my personal assessment is that it’s connected. I’ve spoken to sources coming from Marawi and they’re telling me that whether I believe it or not, these have links to the war on drugs,” he said.

Dela Rosa said drug lords in Central and Northern Mindanao were “affected” by crack down on illegal drugs.

“Not just in Mindanao but in the entire country. They’re trying to put a stop [to our campaign],” said Dela Rosa, which adding that this information had yet to be verified by the PNP. – Rappler.com