Dec 2, 2016 8:57 PM PHT
Rappler.com
Facebook Twitter Copy URL
Copied
(UPDATED) The President explains he wanted Superintendent Marvin Marcos to stay in his post so the police could build a case against him 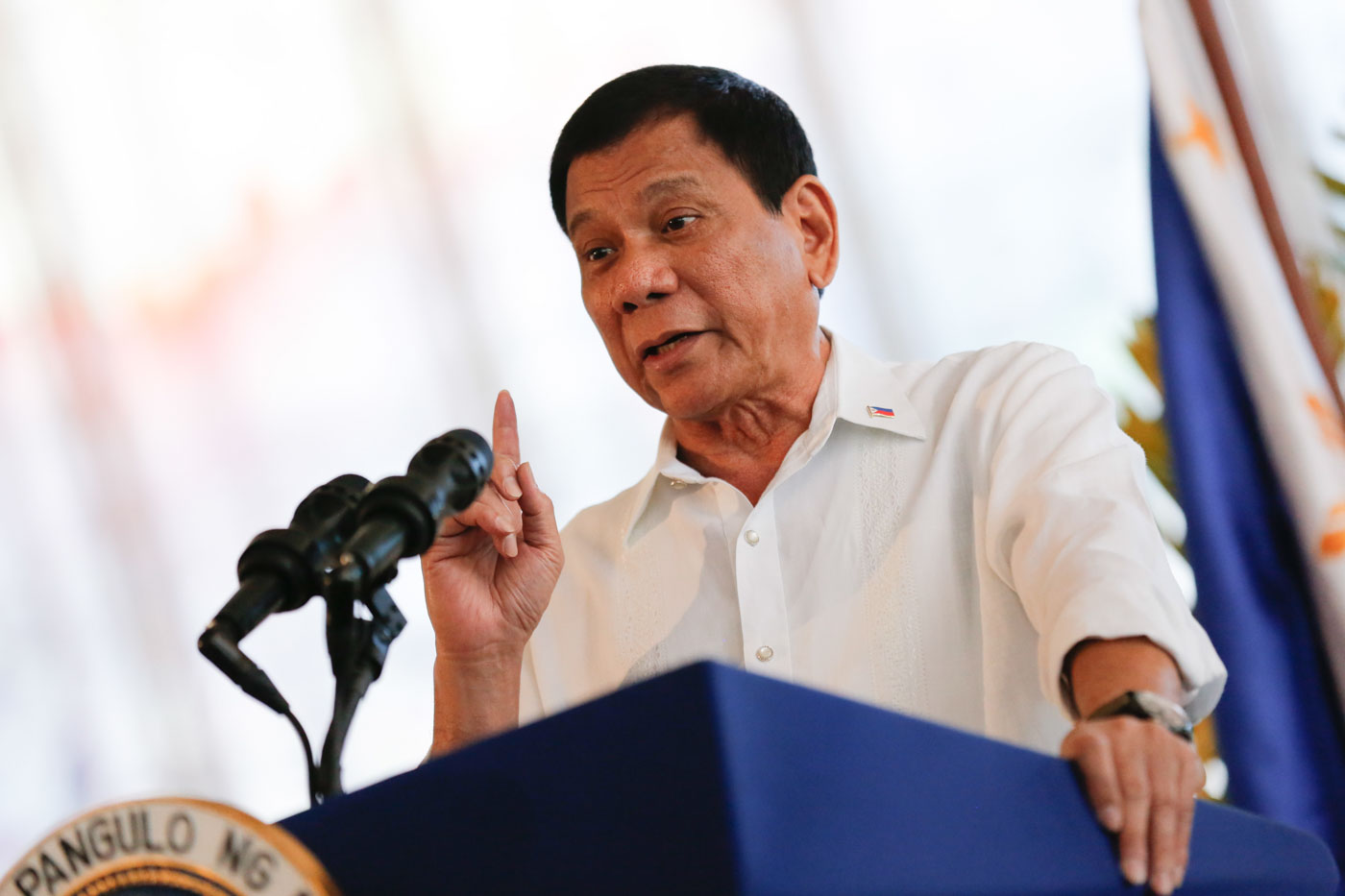 Duterte made the statement at the graduation ceremony of the Highway Patrol Group motorcycle riding course in Davao City on Friday, December 2 where he denied allegations that it was Special Assistant to the President Bong Go who made the request to Dela Rosa on behalf of Superintendent Marvin Marcos, sacked chief of the PNP Criminal Investigation and Detection Group Region 8 (CIDG 8).

(I’d like to make it public. That’s why I said, you remain there as it is. That’s where I learned that Dolina is clean. Marcos is not. But don’t move them because I want to see. If you do that suddenly, the case build up would be disrupted….So it’s not true that Bong Go was the one who called.)

‘I gave the order’

The President did not categorically say, in his speech if he was the one who personally called up Dela Rosa or he gave his orders through another official.

He merely joked that someone should be “blamed” for making the call to Dela Rosa to reinstate Marcos and pointed to Interior Undersecretary Catalino Cuy, a retired police general, who was in the audience.

When sought for clarification after his speech, Duterte confirmed in a phone interview with CNN Philippines  that he was the who gave the order to Dela Rosa.

(It’s like this: I ordered Bong, call [Dela Rosa]. By the time he passed me the phone, Dela Rosa answered. I said, ‘Do not remove the guy because he’s involved – I am going an investigative job.’ That was done, Dolina was cleared. Marcos, positive.  Because I was keeping track of his movements. If you take him out, then…everything will disappear. I can’t follow up.)

When asked, he said Marcos “has to face the charges….Let him maintain the right to be heard.”

Dela Rosa earlier admitted that he had relieved but reinstated Marcos as CIDG 8 chief because of a request from a “higher up,” but did not name him.

In an interview on ANC’s Headstart with Karen Davila on Tuesday, November 29, Dela Rosa disclosed that he had relieved Marcos of his post. But he said he reinstated him, despite reports he was on the payroll of drug lords, because he was asked to do so by someone who gave him a call.

Asked by Davila if the call was made by someone higher in rank, Dela Rosa said yes. “Hindi ko sasabihin kung sino… doon sa taas.” (I won’t say who called me. Higher-ups.)

“Was it the President?” Davila asked.

The PNP chief let out a nervous laugh.

A member of his Cabinet?

On Thursday, Dela Rosa modified his description of the person who called him up by saying he was his “kumpare” or friend. Duterte, however, is his ninong or wedding sponsor.

On the same day, Senator Leila de Lima alleged that it was Go, said to be the government official closest to the President, who intervened on Marcos’ behalf. Go denied De Lima’s claim. (READ: The man they call Bong Go)

Up to Friday, Dela Rosa refused to heed calls for him to identify the person who made the call. He instead dared De Lima to name her source. (READ: Dela Rosa: Name your source and I’ll reveal ‘kumpare’)

Marcos is a controversial figure in the PNP. When he was assigned by Dela Rosa in July, he brought an entire team with him to Region 8. (READ: Espinosa case: Why were Marcos and team moved to CIGD 8?)

No less than Kerwin Espinosa, the jailed son of the former Albuera mayor, testified at the Senate that Marcos had asked for money from his father in exchange for protection. (READ: Kerwin Espinosa: Marcos asked for P3M from dad)

But Duterte attempted to explain why keeping or relieving a police officer hounded by allegations should “not really matter.”

(You know the PNP chief, whether or not you are retained there does not really matter. That’s the prerogative of Bato. Even if they say that he’s [the police officer is] a criminal, wait a minute, let the law take its own course. Don’t remove him, there’s still on ongoing probe on whether it is [the allegation is] true or not.)

(Second, the morale of the people is low. Other people don’t know that we’re doing the investigative work, then you can’t [remove them] so you do that, it will create a ripple in the entire country….We’re really building the case.)

In his speech, the President also cleared Chief Superintendent Asher Dolina, former director of Police Regional Office 8, whom  Kerwin Espinosa had accused of receiving protection money from him when the alleged drug lord testified at the Senate hearing into the death of his father, the late Albuera mayor Rolando Espinosa Sr.

“So alam natin even before [Kerwin] Espinosa, na wala siya (Dolina) sa unang listahan (So we know that even before the testimony of Espinosa, he [Dolina] is not in the first [drug] list,” the President added.

The Senate is investigating the killing of former mayor Espinosa, who was served a search warrant by a CIDG 8 team led by Marcos. Senators said all indications show that Espinosa was killed in a rubout, a claim denied by Marcos.

The President had defended Marcos’ team, saying he stood by their version of what happened – that Espinosa resisted arrest thus the shootout that led to his death. – Rappler.com