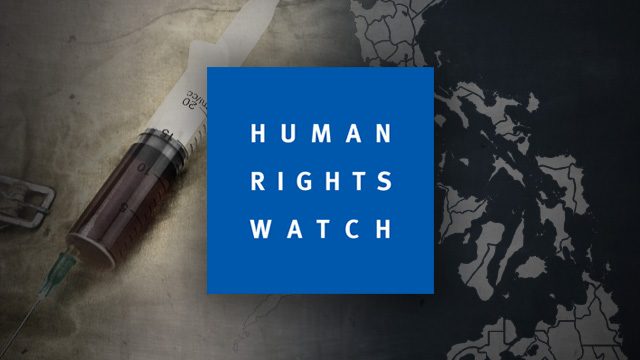 Facebook Twitter Copy URL
Copied
'The failure of the death penalty as a crime deterrent is globally recognized and the government should maintain the prohibition on its use,' says Human Rights Watch deputy Asia director Phelim Kine

MANILA, Philippines – Another human rights group called on Philippine lawmakers to reject the proposed revival of the death penalty in the country.

“The failure of the death penalty as a crime deterrent is globally recognized and the government should maintain the prohibition on its use,” HRW deputy Asia director Phelim Kine said in a statement.

The call comes days after the justice panel’s subcommittee on judicial reforms of the House of Representatives approved House Bill 1, which seeks to reimpose capital punishment for all heinous crimes. (READ: Minority accuses House panel of rushing death penalty bills)

HRW joins other groups such as Amnesty International and the International Drug Policy Consortium in opposing the revival of the death penalty in the Philippines.

On Saturday, HRW said the alleged deterrent effect of the death penalty “has been repeatedly debunked.”

The group said it rejects death penalty “in all circumstances because of its inherent cruelty.”

In addition, HRW pointed out that reviving the death penalty would be a violation of the Philippines’ international legal obligations.

This includes the Second Optional Protocol of the International Covenant on Civil and Political Rights (ICCPR), which states that “no one within the jurisdiction of a State Party to the present Protocol shall be executed” and that “each State Party shall take all necessary measures to abolish the death penalty within its jurisdiction.”

The Philippines signed the Second Optional Protocol to the ICCPR in 2006 and ratified it in 2007. (READ: Lawyers’ group opposes death penalty, ‘shoot-to-kill’ policy)

But as early as his first month in office, President Rodrigo Duterte had already asked lawmakers to revive the death penalty, especially for drug traffickers.

In its statement on Saturday, HRW said that where death penalty is permitted, human rights law limits it to “the most serious crimes” typically those resulting in death or serious bodily harm.

According to the group, the United Nations (UN) Human Rights Committee and the special rapporteur on extrajudicial, summary or arbitrary executions already concluded that the death penalty for drug offenses fails to meet the condition of “most serious crime.”

HRW also noted the many instances international organizations urged countries to prohibit the use of death penalty for drug-related offenses:

He added: “It will only add to the already horrific death toll that President Rodrigo Duterte’s ‘war on drugs’ has inflicted on Filipinos since he took office on June 30.”

From July 1 to December 1, the Duterte administration’s campaign against drugs has already seen at least 5,845 personalities killed both from legitimate police operations and vigilante-style or unexplained killings. – Rappler.com

Photo of lethal injection from Shutterstock