Dec 4, 2016 11:13 AM PHT
Agence France-Presse
Facebook Twitter Copy URL
Copied
(UPDATED) Whatever the outcome of a vote being anxiously watched in capitals across Europe and carefully scrutinized on trading floors around the world, it will lead to change 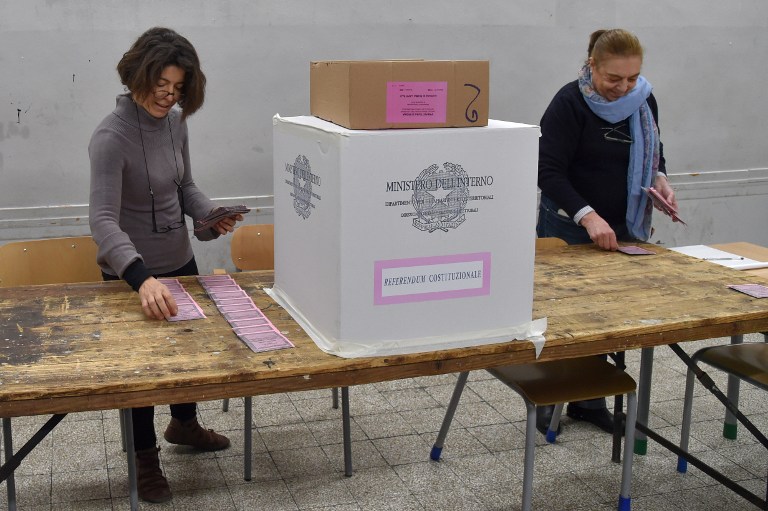 ROME, Italy (UPDATED) – Prime Minister Matteo Renzi voted Sunday, December 4, in a constitutional referendum that has put his future on the line, divided Italy and raised fears of political and economic turmoil across Europe.

Renzi, who has vowed to quit if he loses, was counting on a last-minute turnaround in voter sentiment to win backing for his proposals to streamline parliament and centralize some powers currently held at regional level in the name of more effective and stable government.

“Have you decided how you are going to vote, prime minister?” a female voter cheekily asked Renzi as he turned up at a voting station in his home town of Pontassieve near Florence.

“Now I’m thinking about it!” Renzi quipped back before spending 10 minutes standing in line to register his vote.

Opposition parties have denounced the proposed amendments to the 68-year-old constitution as ill-considered and dangerous for democracy because they remove important checks and balances on executive power.

Spearheaded by the populist Five Star Movement, the biggest rival to Renzi’s Democratic party, the No campaign has also sought to capitalize on the Renzi’s declining popularity, a sluggish economy and the problems caused by tens of thousands of migrants arriving in Italy.

Former Prime Minister Silvio Berlusconi, who belatedly backed the No side, was also out early as the interior ministry reported brisk morning voting.

By midday nearly 1 in 5 of the 47 million Italians entitled to vote Sunday had cast their ballot.

Polls close at 11 pm local time (2200 GMT) with the result, anxiously awaited across Europe, expected in the early hours of Monday, December 5.

If Renzi goes, some short-term market turbulence is inevitable. Some analysts fear a deeper crisis of investor confidence that could derail a rescue scheme for Italy’s most indebted banks, triggering a wider financial crisis across the eurozone.

If he wins, Italy’s youngest ever prime minister will take it as a mandate to accelerate reforms in areas such as public administration, the judicial system and education.

“If we miss this chance it won’t come back for 20 years,” Renzi warned voters before campaigning was suspended at midnight on Friday, December 2.

Voters have spent weeks passionately debating the pros and cons of the proposed reforms.

Polls have been banned since November 18. Up until then the “No” camp was leading comfortably – but with a quarter of the electorate undecided.

After the Brexit vote and Donald Trump’s victory, populism has been a factor, and Five Star, led by comic Beppe Grillo,  would see a “No” vote as its stepping stone to government.

But the campaign has also caused many voters to reconsider the merits of a much-loved constitution, crafted in the aftermath of World War II and the bitter experience of fascist dictator Benito Mussolini’s disastrous rule.

Under the proposed reform, the Senate, currently a body of 315 directly-elected and 5 lifetime lawmakers, would have only 100 members, mostly nominated by the regions.

The chamber would also be stripped of most of its powers to block and revise legislation, and to unseat governments.

Other envisioned changes involve transferring some regional powers to the national government, making it easier to get major infrastructural works approved, and abolishing a costly policy agency in Rome.

Inevitably in light of his pledge to stand down should he lose, the vote has focused on Renzi himself.

And on that score there were mixed messages at a farmers market in downtown Rome on Sunday morning.

“I am voting Yes for change. Renzi’s better than the others and our governments have always been too short-lived to really change things,” said Teodoro, 56, an olive grower selling his extra-virgin oil.

Mario Baczak, a 23-year-old economic graduate working at the Slow Food stall, said Renzi was trying to create a “democratic dictatorship” and had to go. “He may be young but he has been moulded by the old political class.”

And Ana-Maria, a pensioner, said she was voting No because “Renzi is not someone you can trust. He has not shown he has the capacity to finish what he starts.” – Rappler.com