Dec 5, 2016 8:01 AM PHT
Jee Y. Geronimo
Facebook Twitter Copy URL
Copied
(UPDATED) 'Where do I go from here? Definitely not Cabinet meetings!' Commission on Higher Education Chairperson Patricia Licuanan tells Rappler. She says there is still 'a lot of work to do at CHED.' 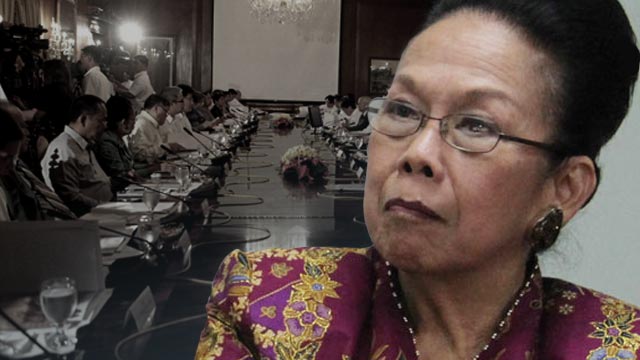 MANILA, Philippines (UPDATED) – Another Cabinet secretary was told to stop attending all Cabinet meetings of the Duterte administration.

Malacañang officials said Duterte’s order was due to Robredo and the President’s “irreconcilable differences.”

Although Licuanan refused to provide a copy of the text message sent to her, she told Rappler “I can assure you, it is the same message.” (READ: How did Duterte break with Robredo? Through a text message)

“Where do I go from here?” she said on Monday. “Definitely not Cabinet meetings! I am still processing this. In the meantime, there is a lot of work to do at CHED.”

In a separate statement, Licuanan said she assured Evasco that she would comply with the President’s order.

Even before Duterte assumed office in June, Licuanan had already said she expects to stay in his Cabinet because her term as CHED chairperson will not be over until 2018.

Licuanan is an appointee of former president Benigno Aquino III.

The Duterte administration had toyed with the idea of replacing her. In June, one name was floated to take over the Commission: Duterte’s former professor Jose David Lapuz. (READ: CHED head? Lapuz plagiarized parts of his UST book)

The CHED chairperson is a known women’s rights and empowerment activist.

Licuanan, former president of the exclusive girls’ school Miriam College, was once asked to react after Duterte whistled at a female journalist in a press conference. Licuanan then said she was “willing to suspend judgment.”

Under Licuanan’s leadership, CHED has seen various reforms such as the Unified Student Financial Assistance System for Tertiary Education (UniFAST) Law, which seeks to “harmonize, reform, strengthen, expand, rationalize, and re-focus” all ongoing student financial assistance programs of the government.

The commission also started an international research project called the Philippine-California Advanced Research Institute (PCARI) which taps into the expertise of foreign universities to develop high-end research capabilities of Filipino scientists and researchers.

But Licuanan has also drawn flak for her controversial statements, including her position that students should consider taking vocational courses instead of pursuing a college education. – Rappler.com