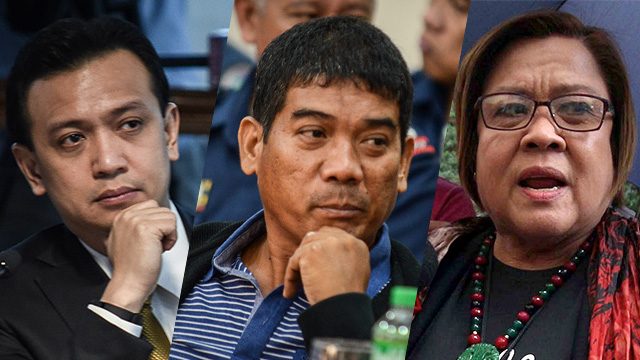 Although his death – in the hands of Criminal Investigation and Detection Group (CIDG) Region 8 personnel – was the focus of the probe, it ultimately zoomed in on the so-called Espinosa drug empire based in Eastern Visayas, and De Lima’s alleged links to it.

Both Trillanes and De Lima are staunch critics of President Rodrigo Duterte and his bloody war on drugs.

During his first round of questioning, Trillanes pointed out several inconsistencies between the testimony of alleged Eastern Visayas drug lord Kerwin Espinosa and Ronnie Dayan, De Lima’s former security aide and boyfriend.

“Ayusin ninyo, ayusin ninyo yung script. Kasi talagang buhol-buhol (Fix your script because it really doesn’t make sense),” quipped the senator who belongs to the minority. De Lima, as a member of the Liberal Party, is part of the majority.

Both Espinosa and Dayan have accused De Lima of getting drug money to fund her campaign. Espinosa claims he gave P8 million as “protection money” that would be used for De Lima’s 2016 run, while Dayan said it was he who facilitated the transfer of cash in behalf of De Lima.

It’s in the fine details of their accounts, however, that the two don’t match. For instance, Espinosa claimed he met De Lima – for the first time after allegedly already giving drug money to her – in Burnham Park in Baguio City in November 2015. Dayan said it happened in 2014. Records from the hotel where De Lima and Dayan apparently stayed point to November 2014.

Espinosa also earlier claimed – before the Senate and in a written affidavit – that he was instructed by Chief Inspector Juvie Espenido, now Albuera police chief, to contact Dayan. But Dayan claimed it was he (Dayan) who contacted Espinosa, allegedly after the instructions of De Lima herself.

Espinosa and Dayan surfaced merely days apart. Espinosa returned to the Philippines on November 18, after spending almost a month in Abu Dhabi where he was first arrested. On November 22, Dayan was arrested by police in La Union. Both have since become key figures in allegations against De Lima, who was justice secretary from 2010 to late 2015.

Philippine National Police (PNP) chief Director General Ronald dela Rosa, who has been present in two out of 3 hearings thus far, denied any allegations of a “script.” Both Dayan and Espinosa are in the custody of the PNP – Espinosa because of an arrest warrant, and Dayan, because he supposedly fears for his life.

In fact, Dela Rosa told reporters in a chance interview, he has made it a point to remind the two to tell the truth in the rare times they’ve seen each other.

Allegations of scripts in the Senate probe into Mayor Espinosa’s death are nothing new. Before the younger Espinosa and Dayan came to testify, Senators blasted CIDG Region 8 police led by Superintendent Marvin Marcos over what they saw as a “premeditated” mission to kill the mayor.

Prior to his death, Espinosa executed two affidavits which named over 50 persons – from politicians, police, and members of the media – as alleged beneficiaries of the Espinosa group’s illegal activities. He was killed after he supposedly shot at police who were trying to serve a search warrant against him inside the Leyte sub-provincial jail in Baybay City.

The hearing – allegations of De Lima’s links to illegal drugs included – is one of the many major chapters in the Philippines’ ongoing war on drugs. Months prior, the Senate also probed the rise of deaths attributed to the war on drugs and Duterte, and the PNP’s alleged role in it. The Senate committee on justice and human rights eventually concluded that the killings were neither Duterte- nor state-sponsored.

But the death of Mayor Espinosa – among the first local chief executives to “surrender” after being linked to illegal drugs – sparked renewed interest in the Senate.

While senators, including former PNP chief Senator Panfilo Lacson, have already concluded that it was a case of extrajudicial killings by police, personnel involved have insisted otherwise.

The younger Espinosa has also accused several of the CIDG 8 personnel of having received protection money themselves. They have also denied this.

Trillanes went one step further in defending De Lima, after Senator Richard Gordon showed a photo of De Lima and Espinosa during the alleged meeting at Burnham Park.

While administration allies and officials claim it’s proof of De Lima’s links to Espinosa, De Lima has said that while it’s true she was in Baguio in November 2015, she did not have a photo taken with Espinosa because he was her funder.

Trillanes, a second-term senator, pointed out that when politicians are in public spaces, they typically take pictures with anyone who asks for one. According to Espinosa, the picture – of him, his common-law wife, and De Lima – was taken the same day he handed over money to Dayan.

“Common sense,” was how Trillanes termed the explanation behind the picture.

To illustrate the point further, the senator flashed photos of Duterte with alleged Visayas drug lord Peter Lim. Duterte and Lim had apparently been principal sponsors of the same wedding.

“Are we now ready to use pictures as a sign of guilt?” he said, referring to Duterte’s apparent links to a supposed drug lord.

Both Lacson and Dela Rosa came to Duterte’s defense.

Lacson reasoned out that unlike Duterte’s photo with Lim, De Lima’s picture with Espinosa had stories behind them.

Dela Rosa, meanwhile, said that as soon as Espinosa detailed Peter Lim’s alleged links to drugs, a furious Duterte ordered him to investigate and build a case against his “kumpare.”

“Trabahua. Kung musukol patya (Work on a case against him. And if he fights back, kill him),” were Duterte’s instructions, said Dela Rosa.

The PNP is currently investigating and collating evidence against the alleged Visayas drug lord, who also supposedly supplied Espinosa with his stream of illegal drugs. – Rappler.com