MANILA, Philippines – Things turned emotional and occasionally heated at the Senate floor on Monday, December 5, as the Senate continued its probe into the death of Albuera mayor Rolando Espinosa Sr.

During her first round of questioning, De Lima grilled Dela Rosa over his apparent failure to properly disclose who had really intervened in the relief of a cop who eventually approved and led the operation that resulted in the death of Espinosa.

In an interview early last week, Dela Rosa revealed that he had relieved Superintendent Marcos, former Criminal Investigation and Criminal Group (CIDG) Region 8 chief, because he was named as a drug protector by Kerwin Espinosa, the mayor’s son. But the relief was stopped on the same day after President Rodrigo Duterte intervened via a phone call.

Dela Rosa had initially only identified the person as a “higher-up” and later, a “kumpare” (friend). De Lima then said it was Special Assistant to the President Bong Go, a long-time aide, who made the phone call. Both Go and Dela Rosa denied this.

Eventually, Duterte relented and admitted that Go called Dela Rosa on his orders.

De Lima pressed Dela Rosa on whether he would have disclosed the identity of the caller if Duterte never owned up to it. “I will cross the bridge when I get there,” said Dela Rosa.

But De Lima insisted on getting an answer, concluding that Dela Rosa would have eventually pointed to Duterte anyway.

It was at this point that Dela Rosa, who usually keeps his cool in public, raised his voice. “Kung maipit, your honor, sasabihin ko. Magpalit tayo ng posisyon, your honor. Ikaw ang mag-chief PNP. Kung kaya ‘nyo bang i-blame si Presidente (If forced, your honor, I will admit it. Let’s exchange places, your honor. You be the PNP chief. Would you be able to blame the president)?” he said.

Senator Panfilo Lacson, a former PNP chief himself, gestured for Dela Rosa to calm down. “Ronald, Ronald,” he spoke into the microphone. 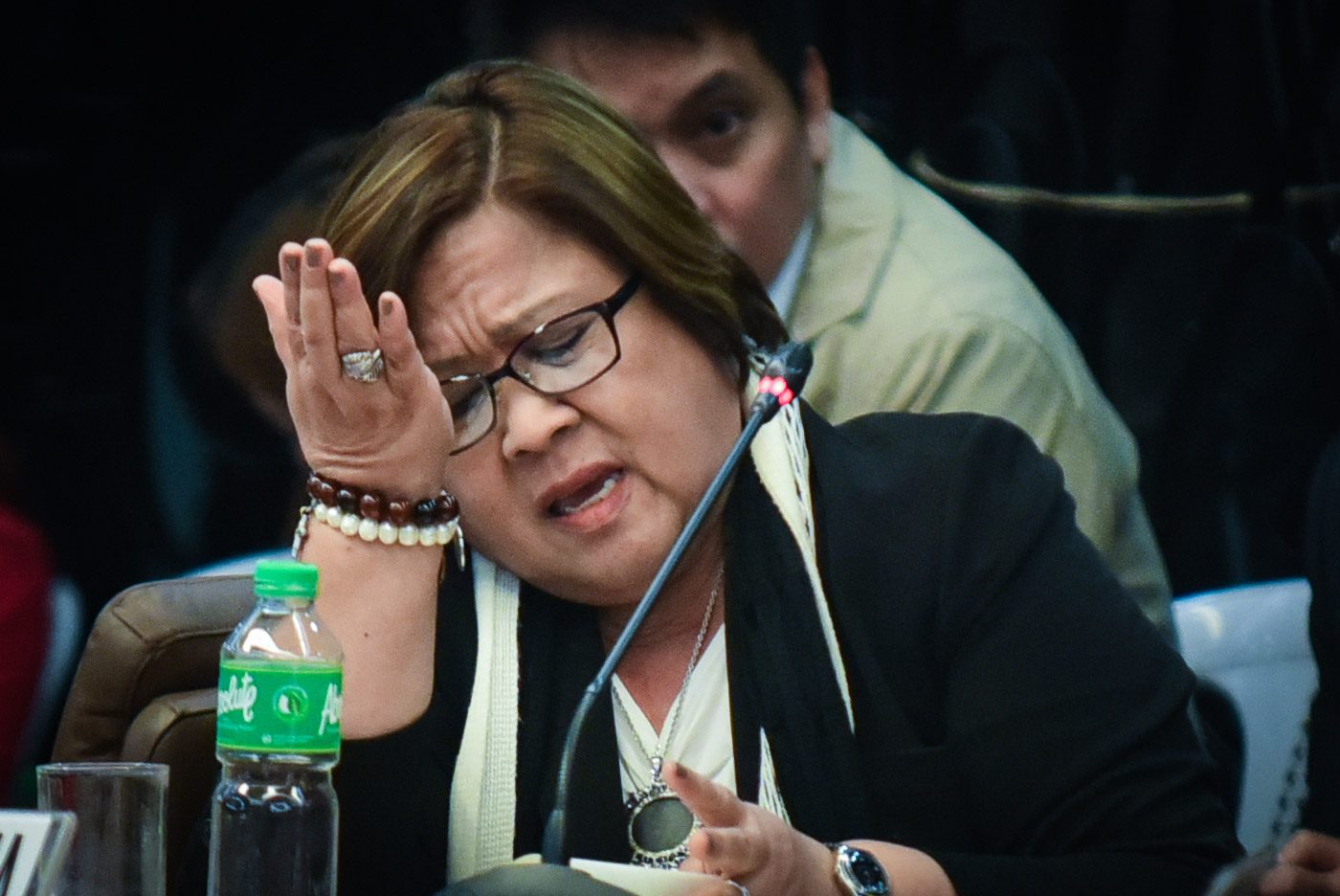 De Lima: I’ve had enough of you

De Lima, who was justice chief from 2010 to 2015, is the highest official being accused by no less than President Rodrigo Duterte of having ties to illegal drugs.

Before the House of Representatives, inmates from the New Bilibid Prison, and former National Bureau of Investigation officials had accused De Lima of accepting drug money to fund her campaign.

The biggest and most recent witnesses against her were present during the Monday hearing at the Senate – alleged Eastern Visayas drug lord Kerwin Espinosa and Ronnie Dayan, De Lima’s former bodyguard and boyfriend.

In her second round of questioning – the last among senators on Monday – De Lima again turned emotional as she addressed both Espinosa and Dayan.

(I know the reason why you’re forced to accuse me of these things. I won’t force you but I’m telling you, I forgive you. I do not blame you. I’m not really mad at you. I am angry at those who are using you. You are both vulnerable. You’re being used to destroy me. That’s what makes me angry. And I will know in due time who they are.)

She added: “If, susubukan ko lang, nag-a-appeal lang ako sa inyo, magsabi na kayo ng totoo; na hindi totoo yung sinasabi ninyong kilala kita, na tumanggap ako, et cetera, et cetera (I just want to try and appeal to you to tell the truth, that all you’re saying is not true, that I know you, that I got money from you).”

Espinosa had earlier claimed he gave over P8 million to De Lima as “protection money.” Dayan has claimed that he got the money from Espinosa on behalf of De Lima. The finer details of their testimonies, however, differ. – Rappler.com