Most child abuse cases in PH happen at home – study

Dec 6, 2016 6:23 PM PHT
Patty Pasion
Facebook Twitter Copy URL
Copied
8 in 10 Filipino children suffer from a form of violence, according to a new study of the Council for the Welfare of Children and the United Nations Children's Fund 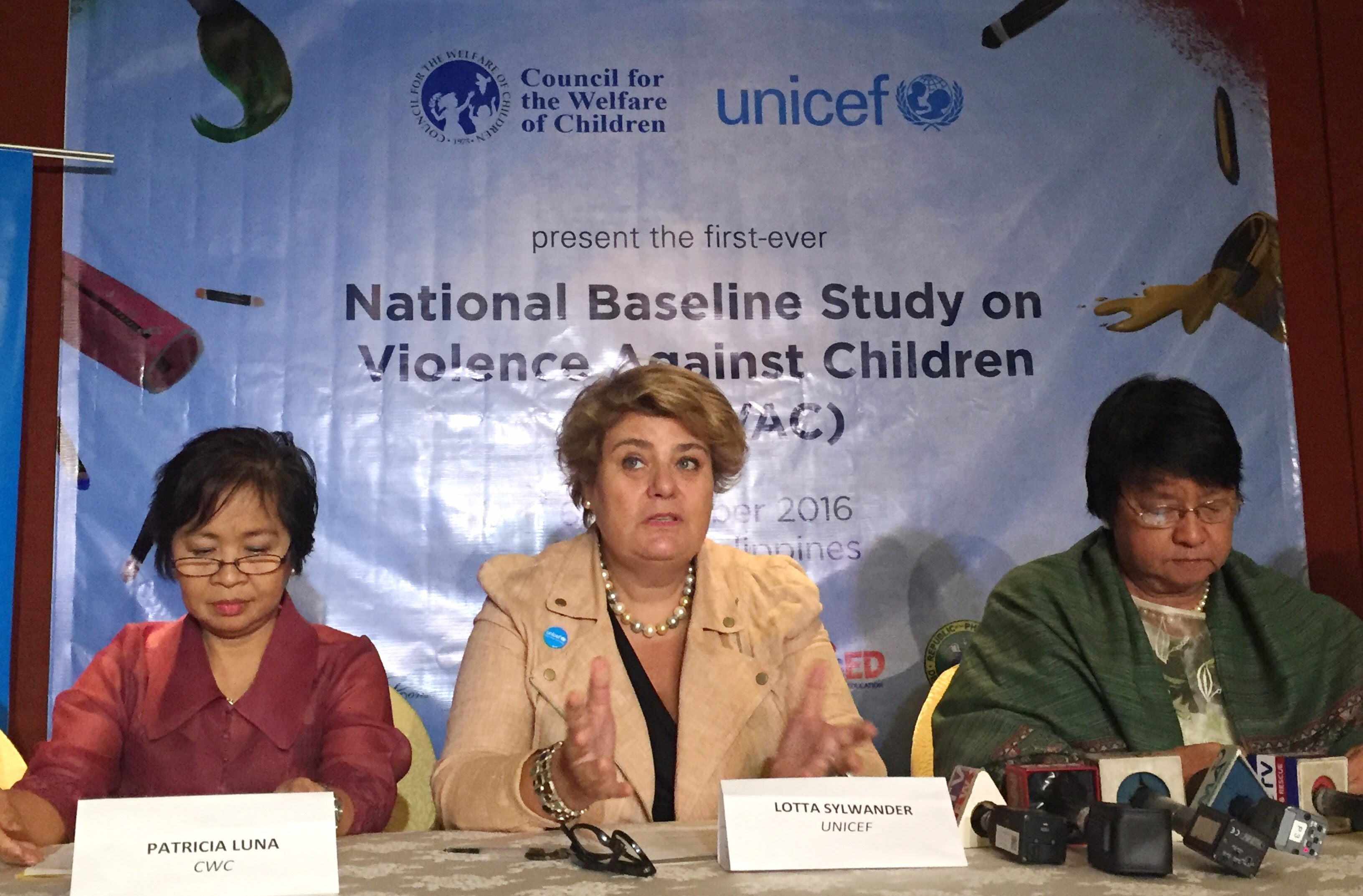 MANILA, Philippines – Are Filipinos children still safe at home? A new study says many of them are not.

According to a new study of the Council for the Welfare of Children (CWC) and the United Nations Children’s Fund (UNICEF), most children experience violence where they should feel safest – in their own homes.

The National Baseline Study on Violence against Children launched on Tuesday, December 6, said that 60% of physical violence suffered by children, and 38% of psychological violence, happen in their homes.

The study was conducted among the 3,866 study respondents, aged 13 to 24, from 17 regions in the Philippines.

Another finding is that 8 in 10 children experienced a form of abuse.

“Eighty percent of the 3,866 respondents aged 13 to 24 years had experienced some form of violence in their lifetime, whether in the home, school, workplace, community or during dating,” the study said.

In terms of psychological abuse, 13.7% of the respondents aged 13 to 18 years old were sexually abused at home, while growing up.

Unwanted touching is the most prevalent form of violence. Other abusive acts specified in the study were:

Ironically, the study showed that there are more boys who have experienced both physical and psychological forms of violence. The study surmised that this may be due to the norm that boys are freer to roam the streets without parental security.

Brothers and cousins were the commonly cited perpetrators of these violence.

Sexual violence also happen on digital platforms. The study recorded that a quarter of the incidents of cyber violence were received sexual messages through the Internet or mobile phones; 2.5% even find their own sexual activities or naked bodies posted online.

The study also said that less than 1% of victims of child abuse report these cases to authorities.

Most of the victims confide in their friends or mothers. Among those who experienced physical violence, only 10.1% talk their situation. A little more than 13%, meanwhile, talk about the sexual abuse they are going through.

“We also make it known that children may file the complaint, or on their behalf, their parents, guardians, relatives, social workers, the barangay chairperson,” Taguiwalo said in her speech during the launch.

However, the study also found that local government units (LGUs) have low capacity to respond to cases of violence against children, due to lack of human and financial resources.

Social workers in assigned to LGUs have to juggle this responsibility with the implementation of other programs such as the Pantawid Pamilyang Pilipino Program (4Ps), the government’s flagship anti-poverty project.

Availability of funds is also an issue. “The 1% internal revenue allotment (IRA) for children is mostly spent for other purposes other than to combat child abuse and neglect,” said the study.

Taguiwalo said the findings of the study should be the basis for government action.

“Research and data will only be meaningful and significantly useful if translated into action,” Taguiwalo said.

CWC Executive Director Patricia Luna said the CWC is crafting a national plan of action to end child abuse based on the study, which took 5 years to complete.

“The result of the study, it really needs a prospective kind of intervention from the individuals themselves from the national to the local level,” said Luna.  – Rappler.com