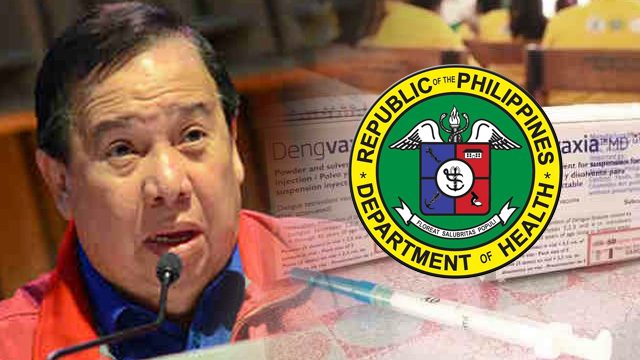 MANILA, Philippines – Senator Richard Gordon is convinced there was negligence on the part of the health department regarding the death of an 11-year-old boy who received the controversial dengue vaccine.

(This kid was vaccinated, he was not asked about his condition. And when I read the papers of the supplier, it was stated there not to include a person with a genetic defect. But they included him.)

The chair of the Senate blue ribbon committee was referring to John Paul Rafael, the 11-year-old who had a congenital heart disease. He died last April 11, just days after he was administered the dengue vaccine.

The DOH already said the cause of death was pulmonary edema (the abnormal buildup of fluid in the lungs), with congenital heart disease and acute gastroenteritis with moderate dehydration as underlying causes.

Rafael’s uncle and aunt – his guardians – were present during Tuesday’s hearing to explain what happened to their nephew.

Manuel Ramirez said Rafael told him about the free dengue vaccine, but they missed the orientation for the immunization program. His wife Kristina, however, signed Rafael’s consent form.

At the time of Rafael’s vaccination, he had slight fever (sinat) and was still recovering from sickness. Ramirez accompanied the boy to school to get the first dose of the vaccine. He also told the teachers and those in charge that Rafael still had slight fever.

“Pinapasok siya sa room, pinagpahinga. Maya-maya, tinurukan na, pinagpahinga. Sumakit ulo, binigyan ng paracetamol (He was asked to enter the room, he rested for a while. Later on, he was vaccinated, then he rested. He got a headache and was given paracetamol),” Ramirez recounted.

Three days after immunization, the boy developed diarrhea and fever, and was taken to the Bagac Community & Medicare Hospital, where he was diagnosed with amoebiasis.

He was later admitted to the Isaac Catalina Medical Center, where he was diagnosed with severe pneumonia, congestive heart failure, and electrolyte imbalance. On April 10, he was transferred to the Bataan General Hospital, where he suffered cardiac arrest and died on April 11.

Health Secretary Paulyn Ubial, who was present during Tuesday’s hearing, said it is “incumbent” for the health officer to check the condition of the patient before administering the vaccine.

But former health secretary Janette Garin, who spearheaded the school-based dengue immunization, noted that when the National Adverse Event Following Immunization Committee (NAEFIC) convened, they concluded that Rafael’s death is not related to the vaccine.

“We also asked the [World Health Organization] representatives present na kapag ba ang bata may congenital heart disease, do we stop vaccination? And the answer was no, because they are actually prone to infections,” Garin explained.

(We also asked the World Health Organization representatives present: do we stop vaccination if a child has congenital heart disease? And the answer was no, because they are actually prone to infections.)

“Pumapasok ang gamot na bago, tama ba na ganun ang patakaran natin? Dapat baguhin natin.  We’re here in aid of lesiglation as well. We cannot prosecute you here, we can only recommend. All we’re saying is, did we do the diligence, at the very least, of a good father or mother? They have the right to say, ‘Puwede ba ‘yan kahit may sakit ito?’ Dapat ang gobyerno ang magsasabi ‘Kung may sakit, ‘wag na muna ho’,” he told the health department.

(This new drug has just arrived, is it right for our policies to be like that? We’re here in aid of legislation as well. We cannot prosecute you here, we can only recommend. All we’re saying is, did we do the diligence, at the very least, of a good father or mother? They have the right to say, “Can you still give this vaccine even if the child is sick?” But the government should be the one to decide whether to defer giving the vaccine to a sick child.)

Ubial said there has been a number of patients who were actually deferred for dengue immunization because of illness.

“We want all the patients to be safe,” she added.

Dr Mary Ann Lansang, who was head of the infectious diseases section of the Department of Medicine at the University of the Philippines-Philippine General Hospital, noted that chronic disease was actually one of the exclusion criteria during the vaccine’s clinical trials conducted in the Philippines.

“They were practicing due diligence by not including chronic disease patients,” Lansang said of the clinical trial conducted by Dr Maria Rosario Capeding of the Research Institute for Tropical Medicine.

Capeding was part of the 3 phases of the clinical trials as the country’s principal investigator. This clinical trial, according to Lansang, was one of the “strongest basis” for the registration of the dengue vaccine.

In an interview with reporters after the hearing, Ubial said she cannot judge the decisions of the previous administration.

“But as a program manager of the Expanded Program on Immunization before, kailangan talaga may due diligence and social preparation. ‘Yun ang tingin ni Senator Gordon. For me, I raised that objection when I was assistant secretary,” she explained.

(But as a program manager of the Expanded Program on Immunization before, there really should be due diligence and social preparation. That’s how Senator Gordon sees it. For me, I raised that objection when I was assistant secretary.)

Now that Ubial is health secretary, she vowed to fix the system “so that the vaccination program is preserved.”

The health department is already administering the second dose of the dengue vaccine to around 489,000 public school students (at least 9 years old) in Central Luzon, Calabarzon, and the National Capital Region.