MMDA in 2016: Did these online traffic services help you? 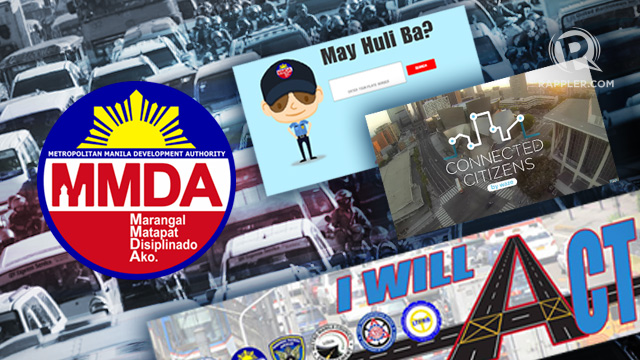 MANILA, Philippines – The Metropolitan Manila Development Authority (MMDA), of course, has other mandates aside from traffic management. It is this part of the job, however, for which it has gotten the most flak, given the traffic crisis in the capital region.

So to keep things quick and easy, the MMDA took advantage of the online platform in 2016, launching 3 applications and websites to address various traffic concerns.

Have you heard of these?

MMDA has a total of 3,000 traffic enforcers, but only 1,100 of them are authorized to issue tickets to those who violate traffic regulations. The rest can only assist and remind motorists about their violations.

Due to this lack of manpower, it has become difficult for the agency to personally apprehend erring motorists.

In support of this initiative, the agency, under then Chairman Emerson Carlos, launched the website “Na-HuliCam Ka Ba?” on May 5.

Carlos said in an April 29 statement that the agency had taken the initiative to publish the database online. It was in response to netizens’ demand for an easy and efficient way for motorists to verify if they had been cited for a traffic violation. 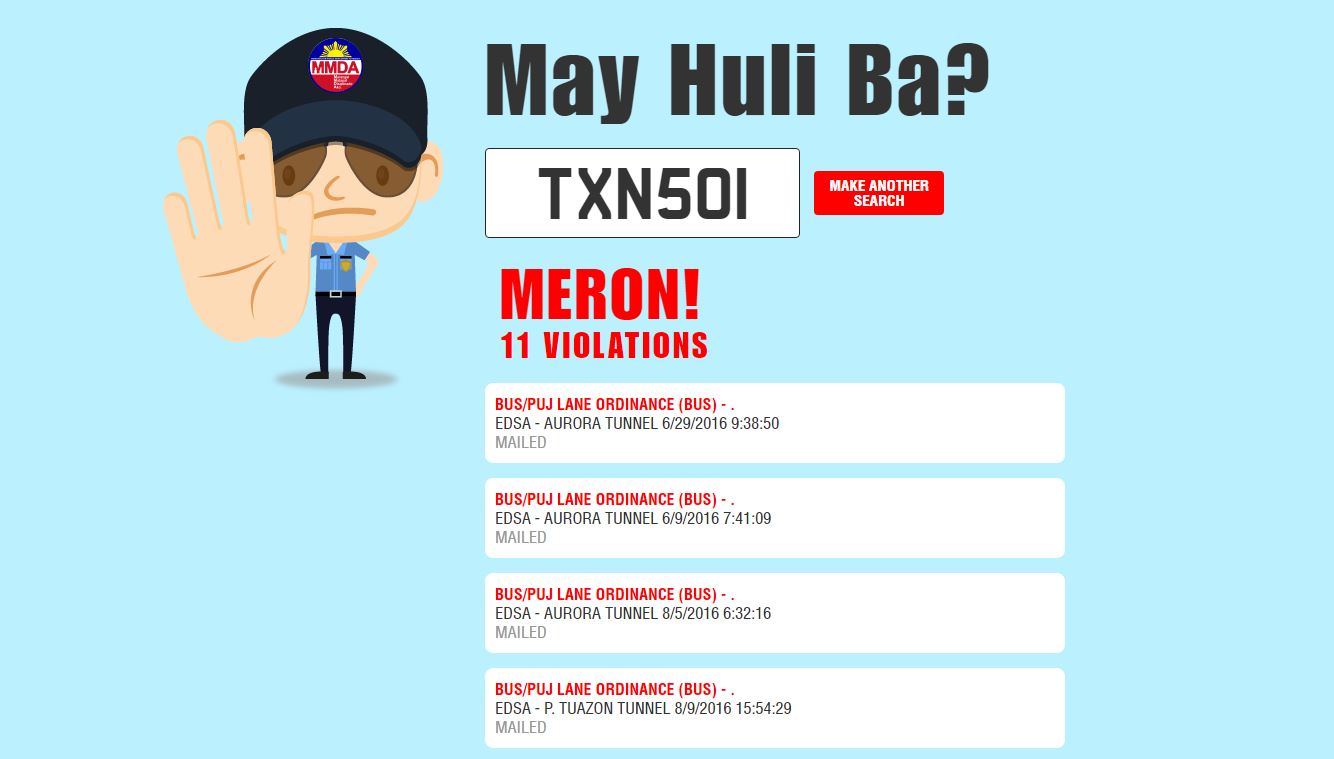 Motorists only need to type in their vehicle’s license plate number on the website http://www.mayhuliba.com. The database will inform motorists of the specific violation, the time and place where it was committed, and the status of the official notice that they will receive from the MMDA.

If no violation has been recorded, the website will generate cheeky lines, such as “Wala…parang chance na mapansin ka ng crush mo.” (None…like the likelihood that your crush will notice you.)

About 250 CCTV cameras placed along major thoroughfares like EDSA and C5 are monitored from the MMDA MetroBase in Makati City. Metrobase currently has 100 personnel, 11 of them hearing-impaired.

When a motorist is spotted violating traffic regulations, the personnel at MetroBase notify a nearby MMDA traffic enforcer in the area through a two-way radio transceiver. If there is no available enforcer, the no-contact apprehension takes place. 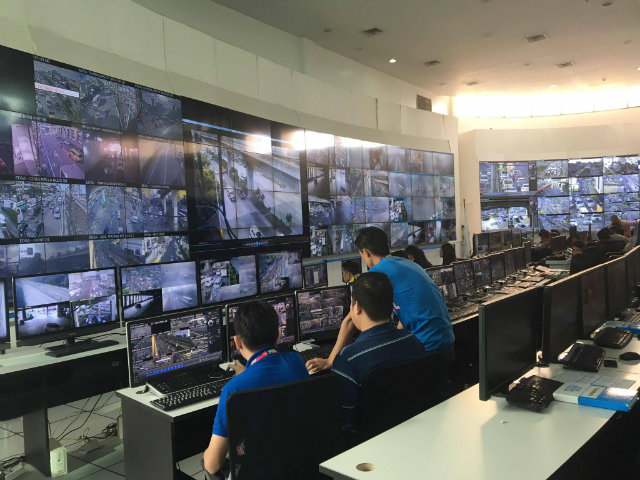 The camera is zoomed in on the vehicle to take a screen shot. The personnel then writes down the time, plate number, body number, company name, vehicle type, location, and violation.

There can be 9 different traffic violations covered by the no-contact apprehension policy. Each has its own MMDA code and penalty:

The Digital Media Group of MetroBase immediately encodes all the data recorded to appear on the website the next day. MMDA then coordinates with the Land Transportation Office (LTO) to find out about the vehicle’s owner or operator.

In 3 days, the vehicle owner or operator should have already received a letter of notice from the MMDA. He/She must then immediately settle within 7 days.

CCTV footage at MetroBase are stored for only 3 months. Vehicle owners and operators are expected to settle their violations to prevent any delay or problem when they re-apply with the LTO for registration or franchise.

Since its launch, the website has reached 1,000 visits a day.

The latest program launched by the MMDA with the Inter-ageny Council on Traffic (i-ACT) is an online reporting system portal called “I WILL ACT.” Here, concerned citizens can send various reports on traffic, including traffic violations, road obtructions, and kotong (extorting) enforcers.

“I WILL ACT” is a play of words from the initials of i-ACT, which was coined by PNP-HPG chief Superintendent Antonio Gardiola. 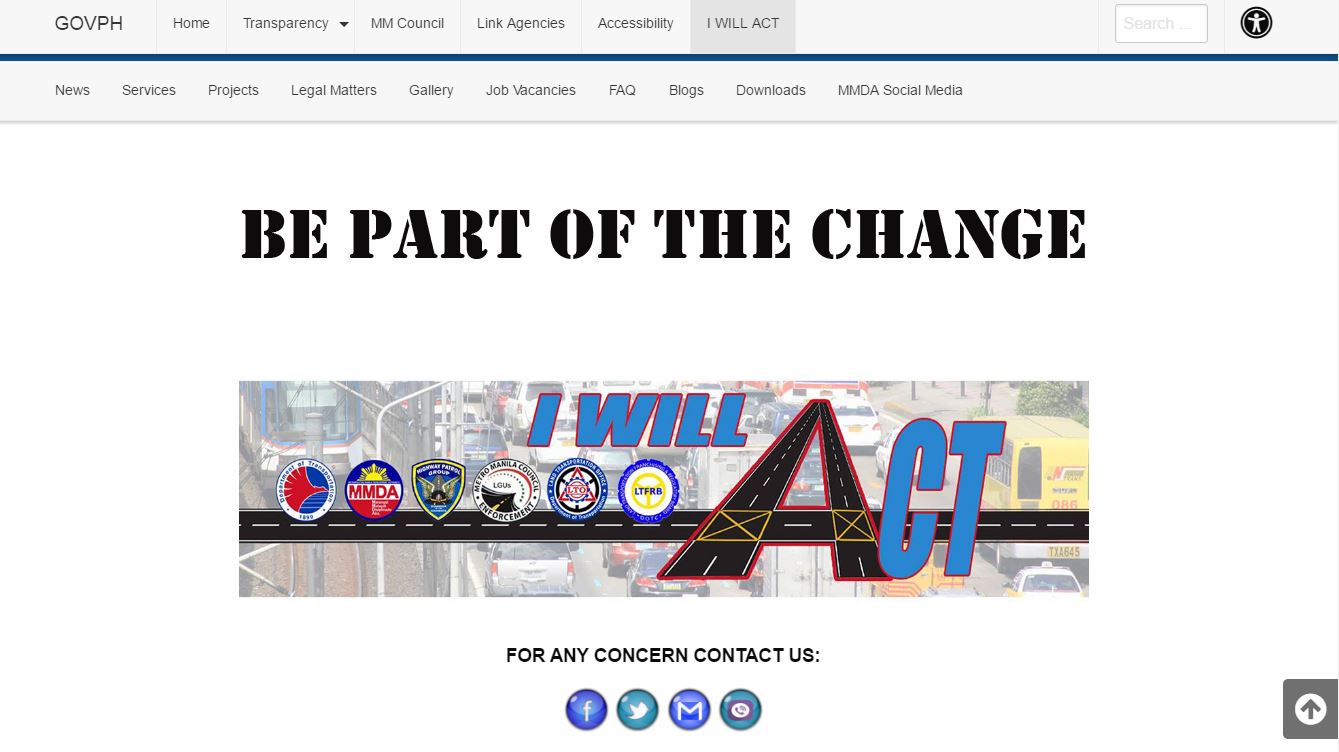 Current MMDA Chairperson Tim Orbos identified the portal as a “venue for our citizens to be part of the solution.”

He pointed out that the MMDA has only about 3,000 traffic enforcers to manage traffic in around 1,000 road intersections all over Metro Manila.

“You could see our predicament. It’s almost impossible to manage traffic with the present numbers. So our objective here is to empower the public and get the help of the private sector with this project,” said Orbos during the launch.

The portal can be found at the topmost tabs of the MMDA’s website.

Citizens can submit their complaints by completing the form that requires one’s full name, mobile number, e-mail address, date of the incident, type of problem, location of incident, and narration of incident.

According to MMDA spokesperson Celine Pialago, who also serves as the portal’s project manager, every field is required (marked with an asterisk) to prevent vague and “nonsense” complaints sent by fake accounts. 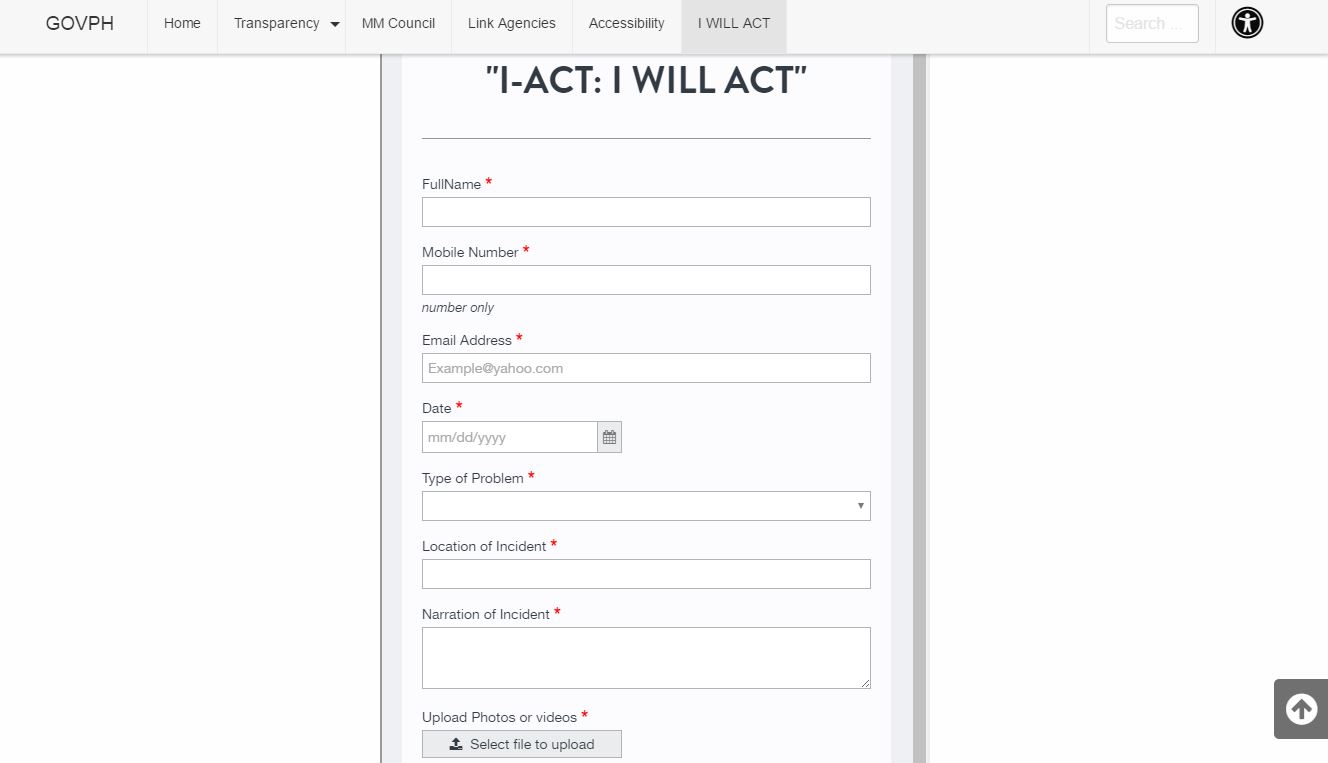 The public may send messages to MMDA’s Facebook and Twitter accounts, via email@mmda.gov.ph, or through the Viber hotline 09061476975. They can also call the MMDA hotline 136, or visit the Help Desk under the the Public Concerns and Responses Management Unit (PCRMU) of MMDA.

Pialago said that the problem with these platforms is that they usually take about a week to compile and summarize the data they receive. MMDA receives about 100 complaints a day on Viber alone.

In I WILL ACT, a Google Excel automatically compiles all submissions, which will then be reviewed by PCRMU. They are mainly in charge of processing the complaints. At the last column of each complaint, the PCRMU marks what MMDA departments and/or i-ACT agencies are concerned.

For every department and agency, a point person is tapped to facilitate the complaints submitted through the portal. All of them have access to the Google Excel file.

To avoid getting passed from one agency or department to another, the MMDA’s Digital Media Group is in charge of doing follow-ups and relaying information to the complainants. This way the complainant will only have to contact one body directly.

In 3 days, the complainant will receive an acknowledgement through text that the MMDA has seen their report. MMDA will then give updates after 7 days on the status of action taken, whether the case has been resolved or still under process.

In the first 3 days since I WILL ACT was launched, the MMDA received a total of 63 complaints.

Nowadays, it might seem impossible for any motorist to not know about the Waze application, which has 1 million users so far in Metro Manila alone.

In 2015, Waze named the Philippines as the 9th worst place to drive in, based on its 2015 Global Driver Satisfaction Index. Manila, it said, has the “worst traffic on Earth.”

MMDA Assistant Secretary Julia Nebrija, who also is the general manager for operations, came up with the idea of applying for the Waze-Connected Citizens Program, making the MMDA the first agency in the Philippines to be part of it. It was launched on November 3.

“It only makes sense to use that same platform to help us to improve [in our traffic planning and management]. I think it also shows a good effort on the MMDA side to continually improve our service,” Nebrija added.

Although MMDA has its own traffic navigator app, what’s better in Waze is that it can provide route options to users other than just a general traffic indicator and information repository for traffic laws.

It is true that it might be too difficult for motorists to scroll down for relevant updates of MMDA through Facebook and Twitter, while Waze users can get updates on the spot.

Waze mainly gets its data from its users who log in updates on the ground. For instance, a driver who comes upon a closed road will input in Waze that this particular road cannot be accessed. The information will then warn other motorists against passing through the same area.

“On the ground or [through] MetroBase, we can automatically input that in the database of Waze so we can help provide better routes before the users even reach that place,” said Nebrija.

This is where MMDA intervenes by providing additional information that the agency has such as traffic-congested areas, road accidents, floods, and road closures.

There are 4 ways the MMDA can use Waze data:

The MMDA MetroBase still plays a vital role in this application. However, Nebrija notes that new personnel will be hired to carefully monitor the CCTV cameras and input the necessary data to Waze.

MMDA hired a local data science company called Thinking Machine to help review existing traffic data, to see what improvements can be made, and to help integrate their data with Waze.

Data on road closures and some vehicular incidents have begun to be inputted in the Waze database. One example was the anti-Marcos rally at the People Power Monument on November 30 that caused road closure along EDSA and White Plains in Quezon City.

Through the program, MMDA also aims to make use of Waze’s traffic view tool in order to monitor other roads that have no CCTV cameras. According to Nebrija, MMDA can select up to 25 routes that they want to monitor, including the Mabuhay Lanes.

“This is a win-win partnership. MMDA’s data will contribute to better routes and Waze data will give MMDA wider incident coverage and public outreach, which we can study to improve our traffic management today and in the long term,” Nebrija said in a previous statement.

Paige Fitzgerald, head of New Business Development-Data Acquisition for Waze, also welcomed the partnership with MMDA in a previous statement: “No one knows more about what is happening on the roads than Wazers, and MMDA will be able to use these anonymous insightsto further promote safer roads. This exchange empowers Waze users. MMDA and its broader community to work together to improve mobility within the Philippines.” – Rappler.com