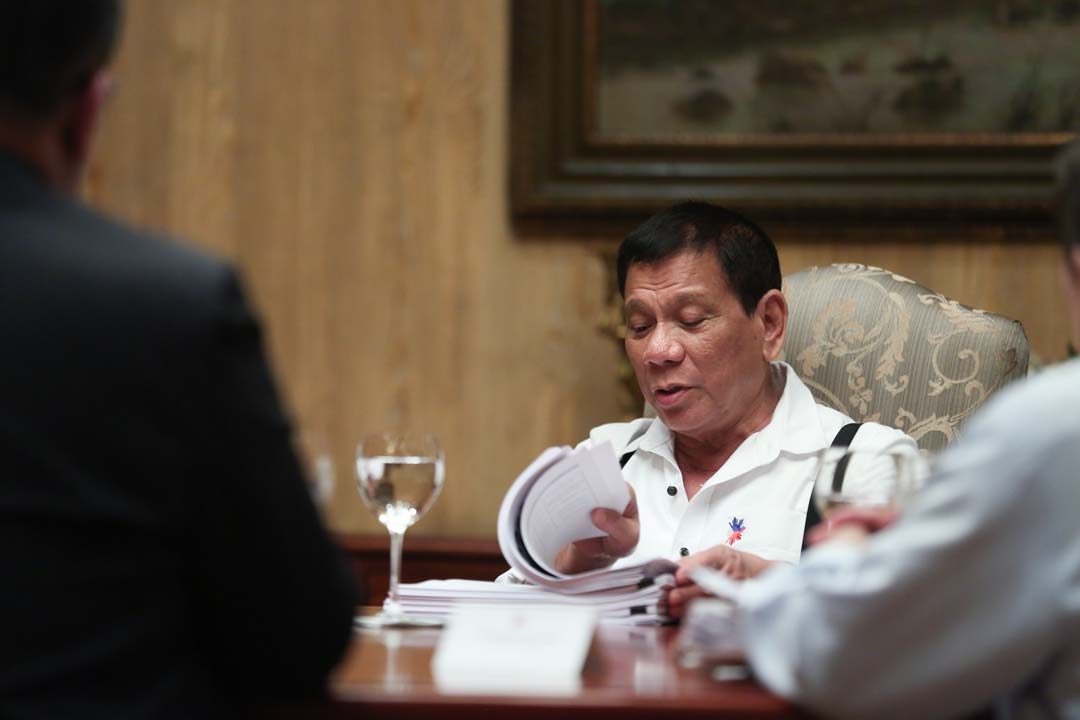 MANILA, Philippines – Admitting he could not deal with its implications on his own, President Rodrigo Duterte has given copies of his final list of suspected drug personalities to Senate President Aquilino Pimentel III, Speaker Pantaleon Alvarez, Chief Justice Maria Lourdes Sereno, and the new Armed Forces chief.

Duterte revealed this in his speech at the Armed Foces of the Philippines change of command ceremony in Camp Aguinaldo, Quezon City, on Wednesday, December 7.

“Why did I give a copy of that thick folder to the Senate President? Why did I give that copy? I furnished a copy to the Speaker of the House,” he said.

Later in his speech, he said, “I sent also one thick folder to the Supreme Court and I just wrote on it, ‘For whatever it may be worth to you.'”

Duterte had earlier said he had only shown Pimentel and Alvarez his list, which he claims to be his last drug list containing thousands of names of drug lords, drug pushers, barangay captains, policemen, municipal mayors, governors, judges and prosecutors.

The President said he decided to furnish copies of the list to the legislative and judiciary branches because he admitted he could not deal with the implications of the list on his own.

Addressing fellow San Beda law alumni on November 26, Duterte said he would distribute copies of the “final” drug list to members of the National Security Council and Congress leaders so they can “formulate how to prevent disaster for the next generation.”

He said he gave the list to new AFP chief General Eduardo Año because he needs the military to help in his “war on drugs,” especially since many members of the Philippine National Police areallegedly linked to drugs.

“That’s the reason why I declared a state of lawlessness, so I can call upon you, the Armed Forces, to help the civilian sector, to help the police kasi hindi nila kaya ito (because they cannot do it on their own),” he said, after calling the PNP a “fractured organization.”

He emphasized that his list of drug personalities had been repeatedly validated because “it is not easy to place a name in that list for you shall have destroyed his career forever.”

The list, he was sad to say, included some of his “friends,” including politicians, police, prosecutors, and judges.

Some personalities have been removed from the list upon further validation, such as Pangasinan 5th District Representative Amado Espino Jr and other Pangasinan officials, which prompted a public apology from the President.

Duterte also repeated his promise to continue his drug war “until the last pusher is out of the street, until the drug lord, the big ones are killed.” – Rappler.com