New AFP chief: Only PH flag will fly across our land, air, seas 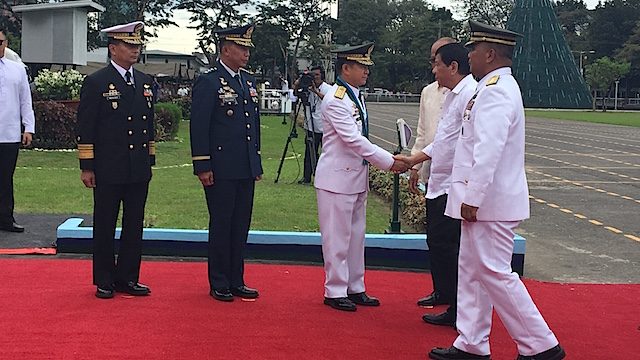 MANILA, Philippines – Newly installed Armed Forces of the Philippines (AFP) chief of staff Lieutenant General Eduardo Año said he will push for the modernization of the military to enable the 120,000-strong institution to defend the country against terrorists.

“Your AFP shall be the relentless force ensuring that the Philippine flag is the only flag waving and flying across our land, air and seas,” Año said during the change of command ceremony on Wednesday afternoon, December 7.

Earlier on Wednesday, President Rodrigo Duterte expressed fears about the the influence of foreign terrorist group Islamic State (ISIS) in the Philippines. He said there is a need to also focus on fight against terrorism. (READ: Duterte fears ISIS caliphate in Southeast Asia)

The military is currently running after the Maute Group, which raised the black flag of the ISIS in Lanao Del Sur. They occupied about 10 hectares of the small town, including the abandoned municipal hall.

The military has regained control of the town hall, but it continues pursuit operations against the local terror group that pledged allegiance to ISIS.

The military also launched massive operations against the Abu Sayyaf in Sulu and Basilan.

“We are mandated to protect our sovereignty and integrity of our national territory. I am determined to lead the AFP in this endeavor by pushing forward the parallel and complementing modernization of our internal security and territorial defense capabilities, thereby establishing a credible defense posture,” Año said.

Año said the military will support peaceful resolution to conflicts, but maintained that the AFP will remain a “lethal force” that is capable of destroying threats.

“Even as we uphold and respect the primacy of peace, make no mistake about it, we shall remain to be a lethal force capable of destroying any threat to our nation. We will not let our people cower in the face of lawlessness and terrorism,” Año said.