‘Duterte is a murderer’ – De Lima 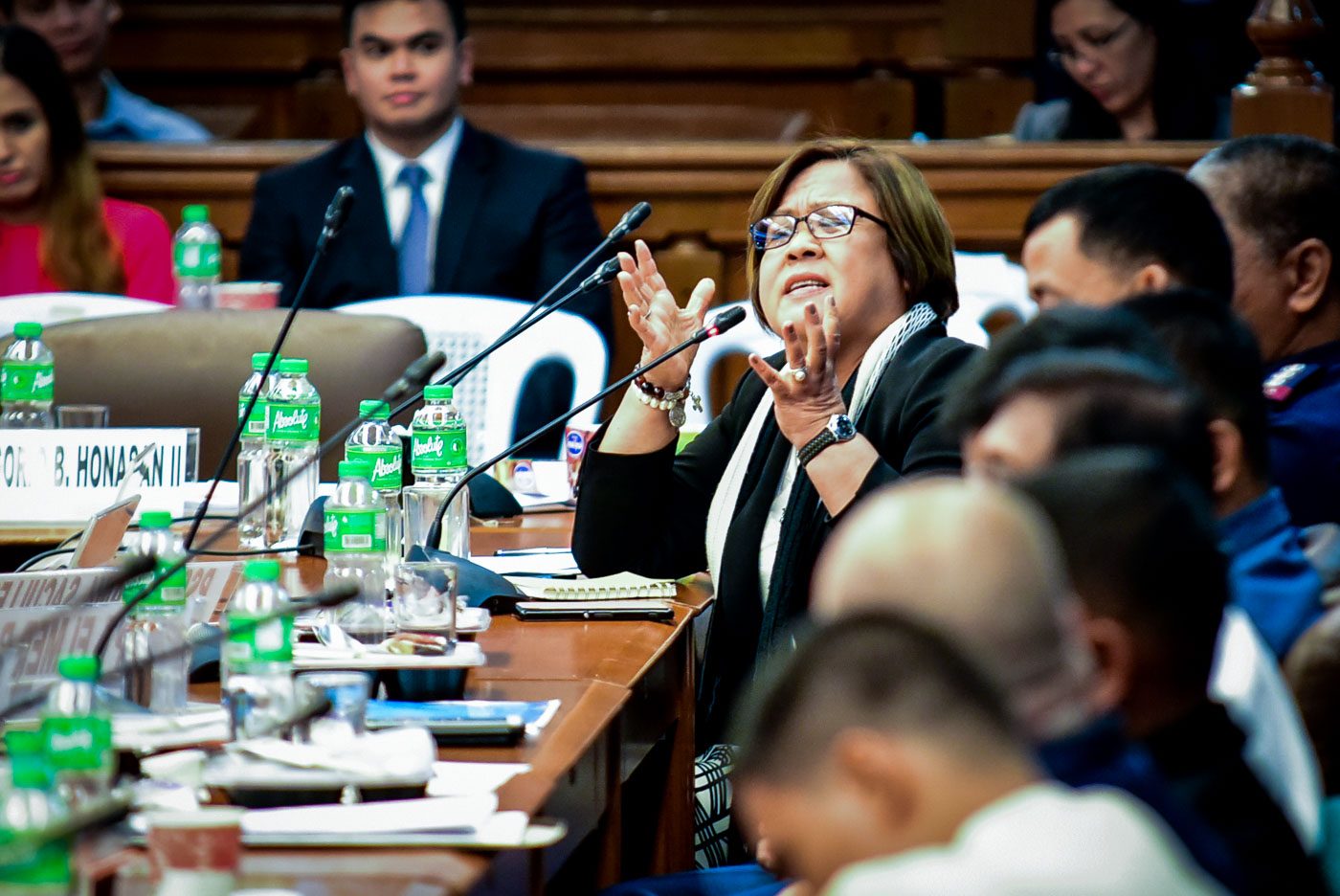 MANILA, Philippines – Senator Leila de Lima on Thursday, December 8, called President Rodrigo Duterte a “murderer” and the “father” of all extrajudicial killings in the country, after he vowed to protect police officers tagged in the murder of a local official.

On Wednesday, Duterte said he would “not allow” prison terms for cops who allegedly conspired to kill Albuera Mayor Rolando Espinosa Sr in his Leyte jail cell on November 5. He said this after the National Bureau of Investigation (NBI) recommended multiple murder charges against the 24-member team led by Superintendent Marvin Marcos.

“Now we all know that the order and command to murder Espinosa in cold blood came from none other than the President himself….People of the Philippines, your President is a murderer,” De Lima said in a statement on Thursday, December 8.

“Duterte’s admission seals his fate as the Father of all EJKs, first in Davao City, now throughout the entire Philippines,” the senator added, citing the nearly 6,000 deaths in the war on drugs 6 months into the Duterte administration.

Duterte has repeatedly vowed to protect police fighting in his war on drugs, a promise he first made during the campaign. He reiterated this on Wednesday, following the release of the NBI findings on Espinosa’s death, adding that the NBI is “under him” anyway. (READ: Duterte: I’ll pardon cops who kill criminals, civilians, in line of duty)

Palace officials, as well as Philippine National Police chief Director General Ronald dela Rosa, have taken turns defending the President. They said he was just expressing his full support for the PNP, but would respect any court ruling involving erring cops.

The President earlier admitted ordering the reinstatement of Marcos, former chief of the Criminal Investigation and Detection Group Region 8, who was linked to illegal drugs.

All these, De Lima said, prove that the President is the mastermind of Espinosa’s murder – a sentiment that Senator Antonio Trillanes IV, another Duterte critic, shared.

“That is an admission that he is the mastermind of such extrajudicial killings,” De Lima said.

She claimed this also proved that Marcos is a member of Duterte’s Davao Death Squad. The Senate committee on justice headed by Senator Richard Gordon, which conducted a probe into extrajudicial killings linked to the Duterte administration’s war on drugs, said there was no proof that the DDS existed.

“This also means that Marvin Marcos et al comprise part of the expanded DDS, which is now national in scope and operation. Nothing can be clearer than that. What we now have is a Presidential Death Squad,” De Lima said.

Trillanes also said Duterte’s statement “proves he is the mastermind in the killing of Mayor Espinosa.” He added that this could be used as evidence in possible murder charges against the President once his term ends.

The Senate committee on public order, in its initial findings, said the death of Espinosa was premeditated and that police officials are accountable for it.

In their joint report released Wednesday night, the Senate committees on  justice and human rights and public order called on Duterte to “follow the law” in his war on drugs and to punish erring cops. But it also said there is not enough evidence to link him to extrajudicial killings in the war on drugs. – Rappler.com