Dec 9, 2016 10:26 AM PHT
Patty Pasion
Facebook Twitter Copy URL
Copied
The self-confessed member of the Davao Death Squad, a key witness at the Senate probe into extrajudicial killings, also accuses the President of committing genocide and crimes against humanity 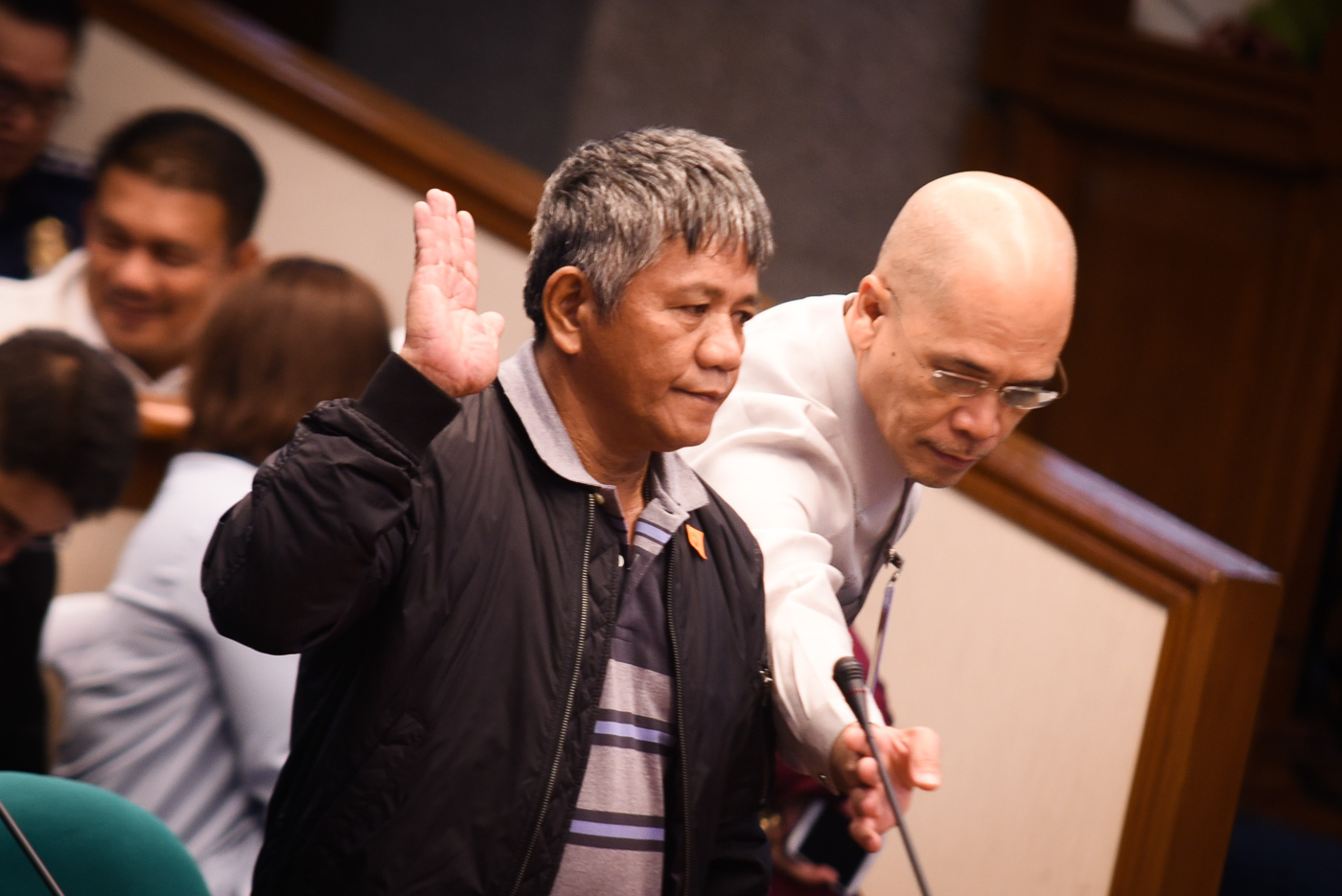 Matobato through his lawyer, Jude Sabio, filed his complaint-affidavit before the Office of the Ombudsman Friday morning, December 9.

‪He accused the President of violating the following laws: ‬

The other alleged DDS members in the complaint are:

In his complaint, Matobato said he filed the complaint to seek “justice” for the alleged victims of the DDS. (READ: Edgar Matobato: Liar or truth-teller?)

In his affidavit, Matobato alleged that the DDS was responsible for over a thousand murders in Davao City from 1988 until September 2013, the time he left the group. (READ: TIMELINE: Witness lists killings allegedly ‘ordered by Duterte’)

The group allegedly formed by Duterte mainly targeted robbers, rapists, and other suspected criminals in Davao City when the President was mayor.

(Mayor Duterte is the leader of the DDS. The Lambada Boys’ code name for him is “Charlie Mike” or “Harry/Hari.” Nearly all operations have to be cleared with Duterte.)

The Lambada Boys are allegedly the precursors of the DDS.

He alleged that Duterte would even participate in the group’s operations, which Matobato had also narrated when he testified before a Senate inquiry into extrajudicial killings.

(He ordered the killings. If the victim is known or big-time, Duterte would go to the Laud Quarry to make sure of the identity of the target and to watch the dismemberment of the corpse.)

Matobato accused Vice Mayor Duterte of ordering the killing of businessman Richard King, which the official had categorically denied.

Protection from a ‘serial killer’

Malacañang dismissed the complaint as “nothing but harassment” since Duterte cannot be sued while he is president.

‪Sabio said he and his client are aware of the President’s immunity from suit while in office but believed it was time to challenge this presidential privilege.

‪(Maybe it’s time to study it. What could we do if the sitting President is a serial killer? It is not the intention of the said privilege to allow a serial killer to lead the country.)‬

Senator Leila de Lima, Duterte’s fiercest critic in the Senate, earlier filed a petition for writ of habeas data against Duterte before the Supreme Court, to “test” the doctrine of presidential immunity

Matobato first came into public view when he testified at the Senate probe into extrajudicial killings when De Lima still chaired the committee on justice and human rights.

The former hitman claimed during the September hearing that Duterte ordered summary executions in Davao City during when he was mayor.

The President has repeatedly denied the existence of the DDS, saying there was “no honor” in extrajudicial killings, though he made contradictory statements before he formall joined the presidential race. (READ: ‘Duterte: Am I the death squad? True’ and WATCH: Rappler Talk: Human Rights Watch on Duterte and the death squads in Davao)

The Senate panels that investigated the spate of killings in the Duterte administration’s war on drugs had also concluded that the President had no hand in the killings, and there is no proof of the DDS’ existence. The committees on justice and human rights, and public order and dangerous drugs, however, recommended the criminal investigation of Matobato’s allegations.

Matobato, a former Davao City employee, is facing charges for illegal possession of firearms in 2014. The case is pending before a court in Davao City.

Matobato, who posted bail, is under the custody of Senator Antonio Trillanes IV.

De Lima and Trillanes had sought Senate protection for Matobato but this motion was denied. – Rappler.com