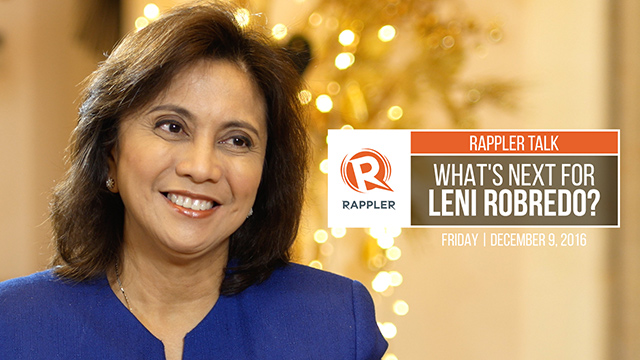 On Monday, December 5, Robredo resigned from the Cabinet after receiving a text message from Cabinet Secretary Leoncio Evasco Jr asking her to “desist from attending Cabinet meetings,” as ordered by President Rodrigo Duterte.

Robredo has opposed key policies and decisions of the administration, such as the burial of late strongman Ferdinand Marcos at the Libingan ng mga Bayani.

Will Robredo be the face of the opposition? Watch this interview with Rappler’s Investigative News head Chay Hofileña to find out what her next steps will be.

On resignation: I was telling myself, I didn’t want to leave – we were doing so much in HUDCC already. There was so much more to do – I am fully aware that I cannot function as HUDCC chair without the support of the President.

As opposition leader: I would have more elbow room now to really be vocal about EJKs for example, death penalty, lowering of the age of criminal liabiity, the burial of the late President Marcos.

On Marcos burial: There are many groups around who feel strongly against this decision of the President. But the voices who are opposing are discordant at this point. There is no unifying voice aside from the ones that came out during the rallies. I want to unify all the voices of dissent. I’m still hopeful the President will listen.

Central message for Marcos burial with 2 different groups opposed to Marcos burial: For me, we stand a lesser chance of being heard if we ourselves are not united. I’d like to create a platform where all the dissenting voices would agree on one thing – it will be difficult, I belong to one political party, and for some people it is always difficult to separate my person from the party I belong to.

On the death penalty: The bill was passed in the committee level without giving it a chance to be debated on. Minadali. (It was fast-tracked.) Doon ako nangangamba (That’s what I’m worried about) that it was passed because it’s something that the President wants. Nasaan na yung independence ng (Where is the independence of the) different branches of government. This is a test of democracy di ba (isn’t it)? Pag hinahayaan natin na ganito ang implications niyan is so much more than the death penalty bill. (If we allow this, the implications will be much more than the death penalty bill.) The implications strike at the very core of our democratic processes already?

The war on drugs: I think kaya ganito siya (the reason why it’s like this), the outrage is not enough. What is scary now is that we’re getting used to it already – kailan ito hihinto (when will this stop), if we don’t make our voices loud enough? It has become the “menu for the day”, may napapatay (someone’s killed) left and right. Yung linya na, (The line,) will you protect evil or will you protect the victim? You don’t know anymore what is the delineation between the two. Taking the law into our hands has become usual already. Everyone is given the license to just kill anybody.

On handling the President’s macho/sexist comments: I have endured a lot of those behind closed doors. It is always a struggle between expressing my outrage and keeping quiet about it. And in so many instances I decided to keep quiet about it, only because it might affect our work relationship and mahalaga talaga sa akin ang trabaho ko sa housing (my work in housing is really important to me). But when those remarks were made public that was when the line was crossed, I cannot just sit down and not say anything. Hindi na lang ako yun. (Then it’s no longer me.) It wasn’t just meant to insult me but every Filipina.

On President’s assurance Robredo will finish her term: Ang reaksyon ko, “Salamat.” (My reaction, “Thank you.” I hope that assurance will be good for 6 years. You can’t help but be worried na may ginagawang pailalim ang kampo ni Bongbong Marcos (that Bongbong Marcos’ camp is plotting something). When the President would acknowledge him in public as the “new VP”, what do you make of that? When he travels on a foreign trip with him, how will you interpret it?

On HUDCC turn-over: Gusto ko sana personal din ang hand over ng (I would have wanted to also personally hand over the) terminal report. Tingin namin kung masusunod ang policies na sinimulan namin, bibilis sya. (We’ll see if the policies we started will be continued, it’ll be faster.) Right now it takes about 2-3 years for a housing project to come into fruition because of the processes. What we have done in the 5 months is to try and unlock the knots.

On the Cab Sec’s many roles: The cabinet secretary is head of so many agencies, he also has supervisory role over 12 other agencies. Yung ang takot ko e (That’s my fear).

On Kilusang Pagbabago: I don’t really know, only what I read from news articles. The social infrastructure is there already, need only to strenghthen them and funnel into institutions.

On the House and Senate: I think it’s very important that people have confidence in the institutions. Halimbawa ngayon. Nalulungkot ako sa mga nangyayari sa House of Representatives, nangyayari sa Senado. Baka ma-erode ang integrity ng mga institusyon natin. ‘Yung mga tao, baka hindi na sila maniwala… (For example now. I’m saddened by what’s happening in the House of Representatives, in the Senate. The integrity of our institutions might be eroded. Our people might stop believing) [that the institutions] are the last bastions.

How do you see yourself vis-a-vis the opposition & government? One of the things my partymates asked is “Ano na ang mangyayari sa amin? (What will happen to us?)” Ako naman (For me), they would have to decide for themselves, kasi (because) most of the members of the party belong to the majority. If you ask me, it would still be better for us to be supportive of this administration in matters where we agree on, but to make sure that we be very passionate on the issues that we don’t agree on. This admin has only been here for less than 6 months. Tingin ko kasi, lahat naninimbang (I think everyone has been weighing things) over the last 5 months. Kahit nag-a-agree tayo, hindi tayo masyadong supportive, kahit tayo nagdi-disagree, parang hindi rin tayo very vocal about it (Even if we agree, we’re not as supportive, even if we disagree, it seems like we’re not very vocal about it too). It has to change if we want this administration to change for the better. – Rappler.com