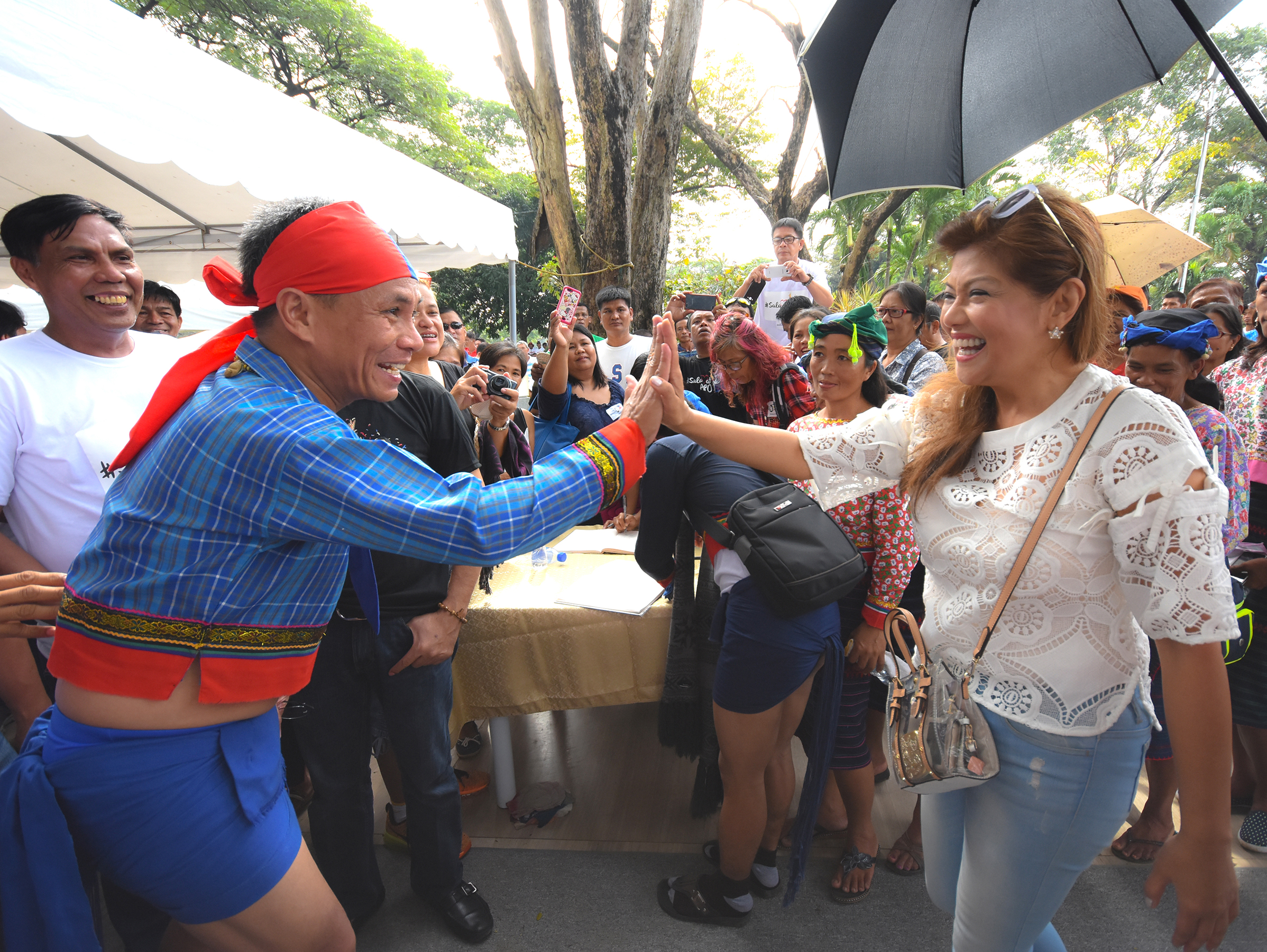 MANILA, Philippines – Sure, the nation had not collectively forgotten Martial Law, but that dark chapter in our history was probably not foremost on anyone’s mind at the start of 2016. That was, until the only son and namesake of dictator Ferdinand Marcos started climbing up in election surveys and, later, the family won its decades-long campaign to bury the former president as a hero.

This is where 30 years have brought the country. In 1986, Marcos was ousted from power as thousands gathered peacefully on EDSA. Three decades later, victims of human rights abuses during the Marcos regime, and those who are disturbed by the current president’s leanings toward authoritarianism, find themselves back on Metro Manila’s main thoroughfare, shouting the same vow: “Never again!”

Ferdinand “Bongbong” Marcos Jr launched his bid for the vice presidency with a campaign message that sought to free his family from the shadows of his father’s regime: “Progresibong Bukas” (Progressive Tomorrow). (READ: CAMPAIGN NOTES: Marcos Jr’s worry is not the anti-martial law propaganda)

“When you talk to ordinary people, they don’t ask about it (Martial Law). What they ask me is how I can help them because they don’t have jobs, the prices of goods are high, and their children don’t have classrooms,” he said in a press conference on February 12, a few days after the campaign season started. 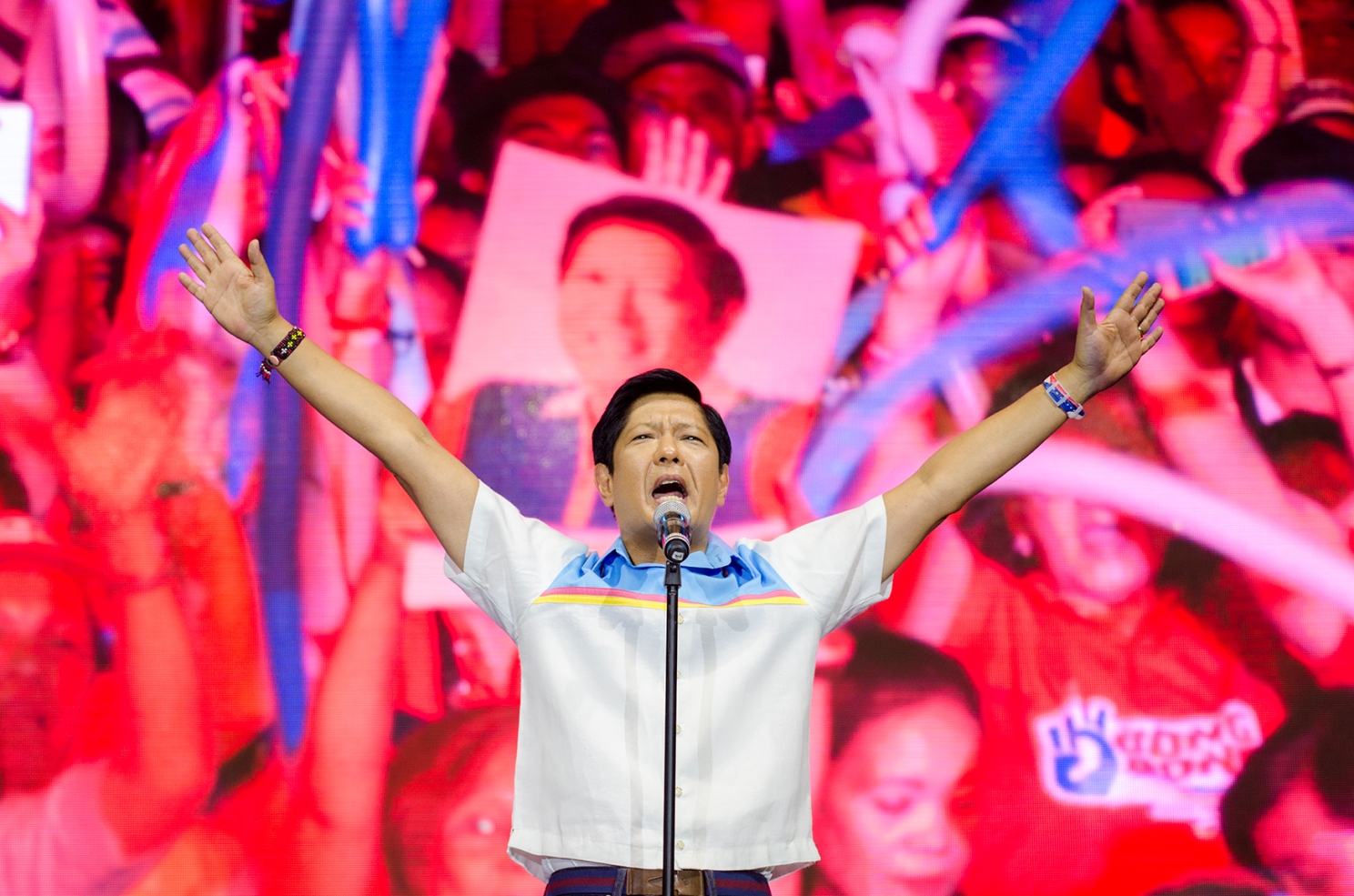 Ironically, the 30th anniversary of the EDSA People Power Revolution, which ended dictatorship, fell within the election season. The Chief Executive then was President Benigno Aquino III, the son of two democracy icons who fought the Marcos regime.

Marcos Jr’s campaign was hounded by a group of Martial Law victims and activists who called their group the Campaign Against the Return of the Marcoses in Malacañang (Carmma). They often questioned him about his father’s “sins.” President Aquino, party mate of Marcos Jr’s rival Leni Robredo, campaigned against him.

Marcos hurdled these obstacles and climbed up in surveys. From a 3% rating in the pre-election survey by the Social Weather Stations (SWS) in March 2015, he eventually hit as high as 34.5% in voters’ preference. (READ: Who is voting for Bongbong Marcos?)

University of the Philippines political scientist Ranjit Rye explained why it happened: “The key issue has always been that the electorate has changed over the last 20 years.”

He said that the biggest weakness of the anti-Marcos movement was that it slowed down leading to the time Marcos Jr again ran for national elections.

Marcos Jr might have lost to the Liberal Party’s Leni Robredo – by just a little over 200,000 votes – but he has the support of his region as well as a strong social media presence. Marcos filed a case before the Supreme Court (SC), sitting as the Presidential Electoral Tribunal (PET). He accuses LP and Robredo of electoral fraud. 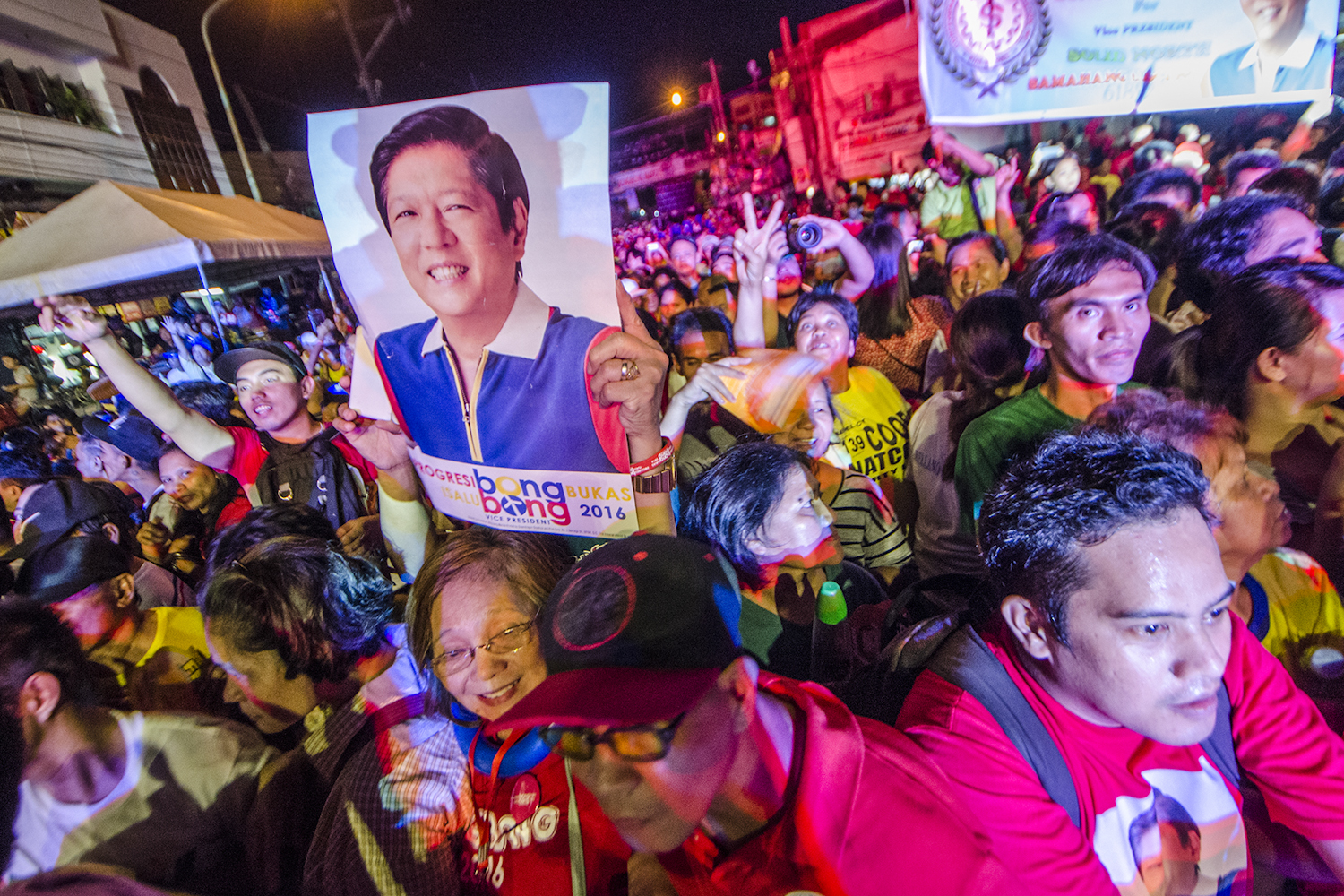 Analysts attribute the former senator’s popularity to his political pedigree, his friendship with President Rodrigo Duterte, and the people’s exasperation with the failed “Edsa promise.” (READ: Bongbong: EDSA disrupted Marcos’ plans for PH)

Political analyst Carmel Abao of Ateneo de Manila University said Duterte and Marcos Jr represent populist leaders. During the campaign, there were groups who pushed for a “DuBong” (Duterte-Bongbong) tandem.

“Finally, somebody who would do something not just say something. All these years, what we’ve had were moral appeals. Daang Matuwid (straight path) was a moral appeal – an appeal to be good. It doesnt matter to [the people now], what matters is that their lives are better,” Abao said.

She added: “I think it was highlighted because it was an Aquino. [That] all these years from [Cory[ Aquino to [Noynoy] Aquino, why do our lives remain this way? Ergo, they saw Duterte and Marcos as an alternative.”

Duterte has made no secret of his close ties to the Marcoses, who supported his presidential bid. He initially refused to give a Cabinet position to Vice President Robredo so as not to hurt Marcos Jr’s feelings. (READ: Duterte: No Cabinet post for VP Robredo yet)

In his first month in office, Duterte gave orders to the Armed Forces of the Philippines to start preparing for the late dictator’s burial at the Libingan ng mga Bayani (Heroes’ Cemetery) – a promise he made to the Marcoses during the campaign. He emphasized that the old man Marcos had the right to be buried there as a former president and soldier, as provided in the AFP regulations. (READ: Duterte: Marcos ‘not a hero’ but ‘law’ allows burial at Libingan)

Victims of Martial Law argued that Marcos was not a hero, citing the human rights violations committed by his regime. The National Historical Commission of the Philippines also disputed his claim that he was a war hero. 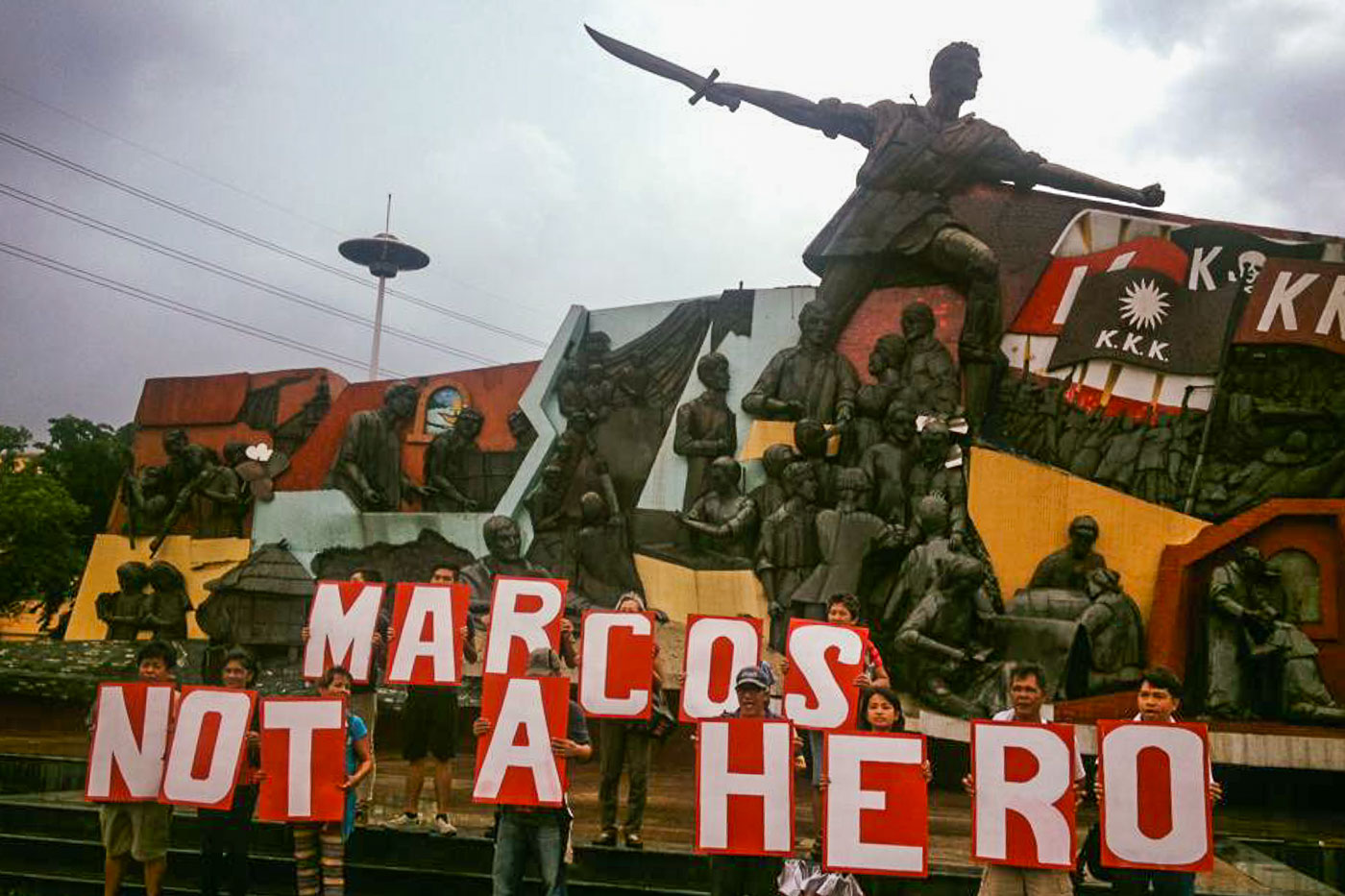 Several petitions were filed before the Supreme Court to block Duterte’s order for a hero’s burial for Marcos. These were junked by the High Court, affirming Duterte’s decision that there is no law explicitly prohibiting it. (READ: Supreme Court: Marcos was not pure evil)

On November 18 – even before the 15-day period for petitioners to file their appeals ended – the strongman was buried in the resting place reserved for the country’s fallen heroes.

Critics see the surreptitious burial as the start of Marcoses’ full-pledged return to power. (They have been elected to various local and national positions, anyway, since their return from exile in 1992.)

Abao said this is a possibility, based on the SC decision on the petitions against the burial. Out of the 14 magistrates who voted on the case, 9 ruled in favor of the burial while 5 dissented.

“The SC decision on the Marcos burial is a writing on the wall [that] if you can legitimize a Marcos, you can do it again. To me, the SC decision merely tells me they have the numbers,” said Abao.

“Obviously, they have the support of Duterte. Could Leni be dislodged? Yes. About the electoral protest, it’s very hard to get to the truth also. We really don’t know because anything can happen when it comes to election [matters],” she said. 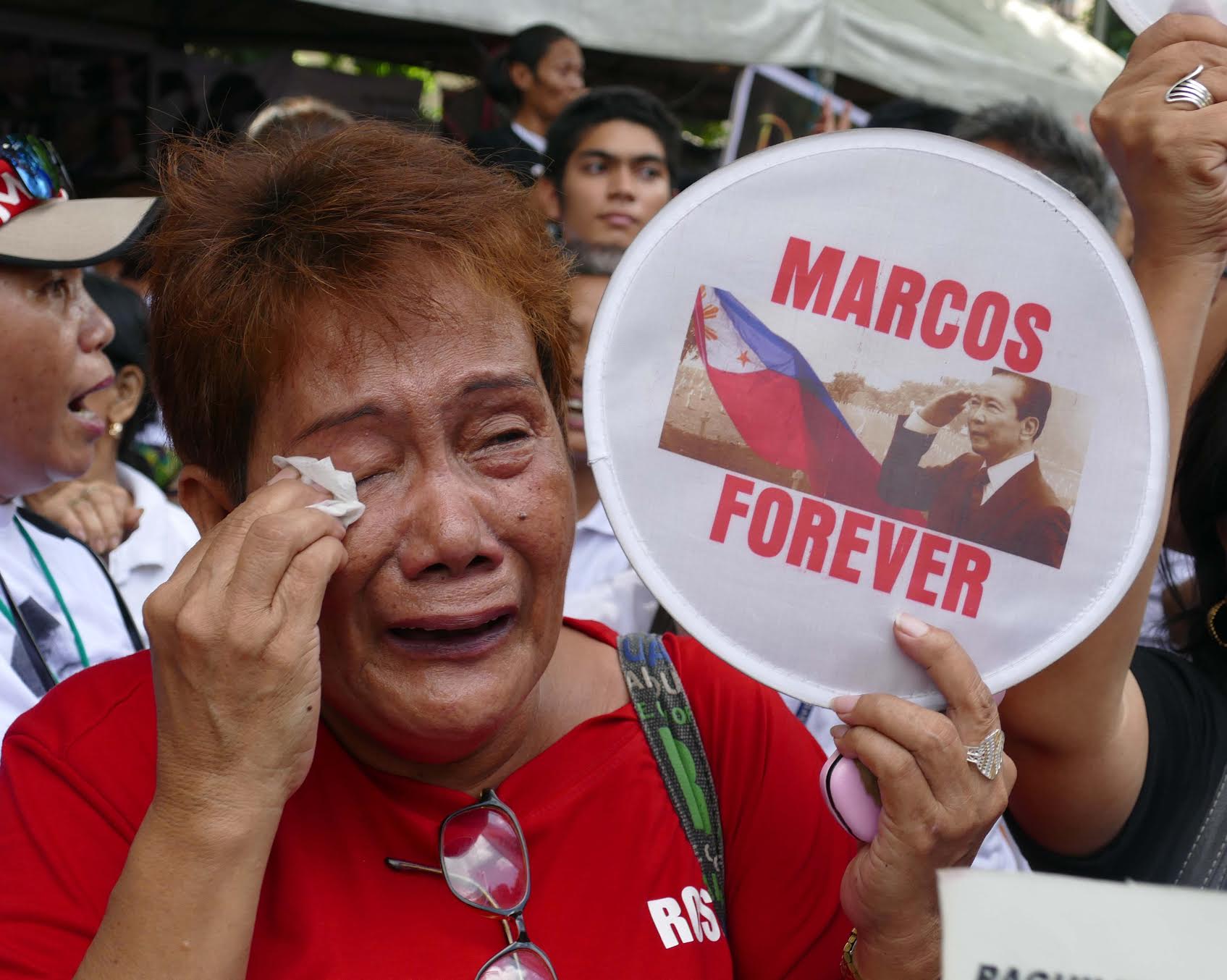 She claimed that at a time when only a handful knew about the President’s order to her, groups identified with the Marcos camp were already tweeting goodbyes to her. The Marcos camp has since reiterated its allegation that Robredo won through electoral fraud.

Under an administration that is ready to set aside the atrocities and the plunder that were committed by the Marcos regime, the only thing that can stop the family’s full restoration seems to be a strong protest movement.

Right after the Supreme Court ruled to allow Marcos’ burial, a series of protests erupted nationwide. It continued after the clandestine burial took place. Some of the major protests were organized by members of the Left despite their existing alliance with the Duterte administration.

“What it did was to resurrect the anti-Marcos movement and may have actually created a snowball,” said Rye. (READ: Protesters to Duterte, Marcoses: ‘This is what democracy looks like’) 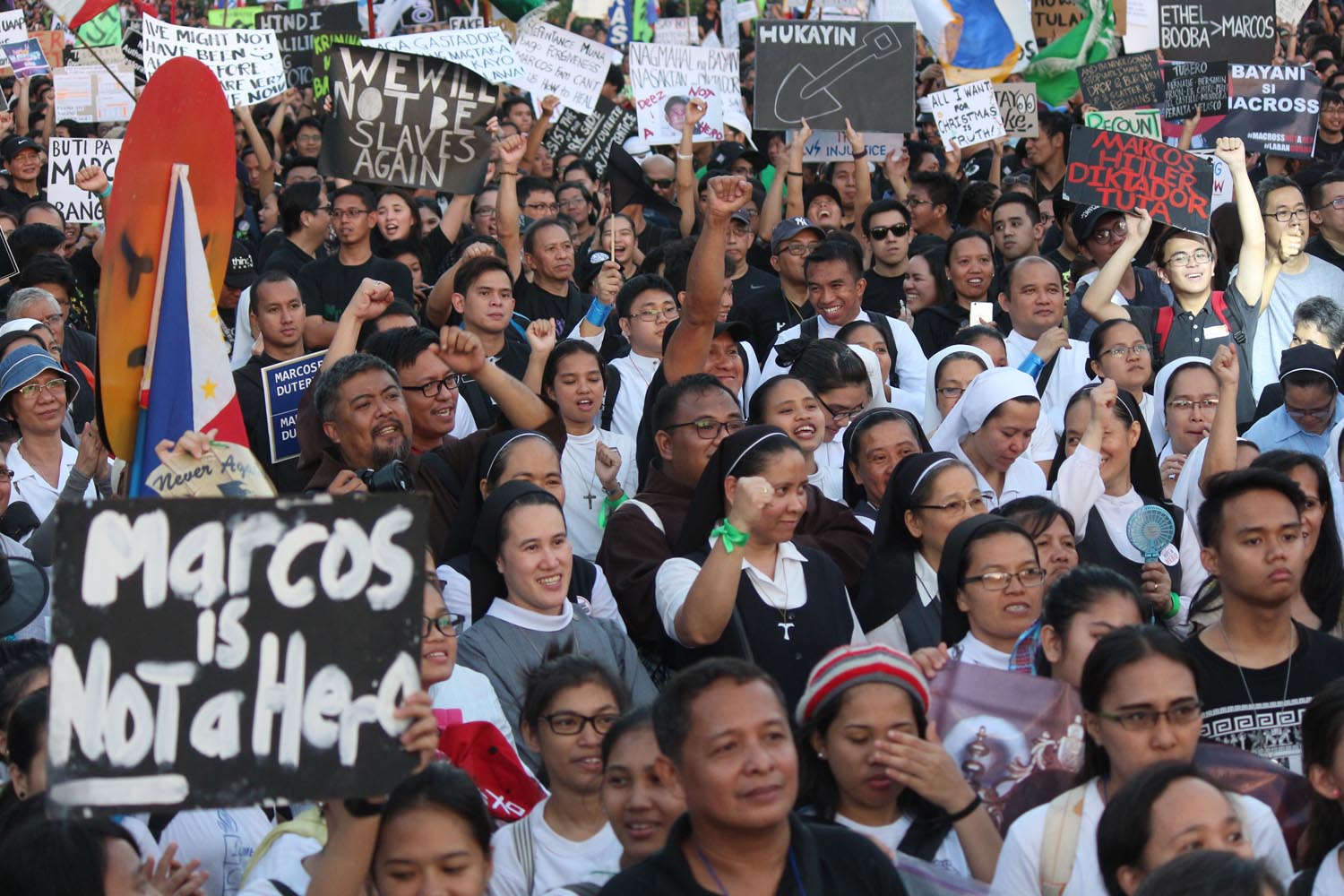 “Right now the argument of the movement was that [the burial was] really inappropriate. It was unethical. It was symbolic of something that is not true – that Marcos was a hero in history and [he] was not,” he added. “Because of the movement, a lot of young people began to be educated about that period in history.” (READ: Diokno: Next anti-Marcos campaign is to educate the youth)

And with a new generation getting into debates over Marcos’ heroism or non-heroism, the late dictator will continue to loom large in 2017. – Rappler.com