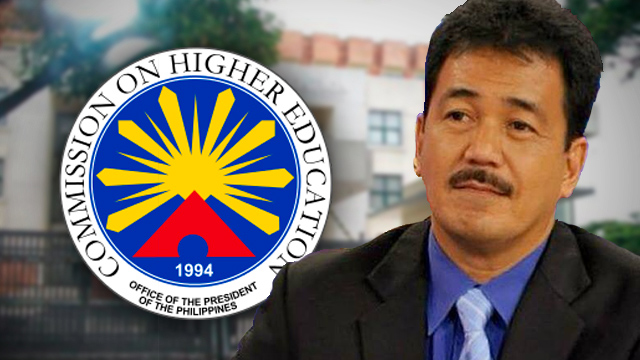 Licuanan has continued her work as CHED chairperson even after she was told to stop attending all Cabinet meetings of the Duterte administration.

Rappler obtained a copy of a December 8 letter written by CHED Executive Director Julito Vitriolo and addressed to the President. The Office of the Cabinet Secretary stamped the letter received on Friday, December 9.

Vitriolo said at the beginning of the letter that he is writing “in behalf of the career and non-career officials and staff” of CHED.

In the strongly-worded letter, Vitriolo asked Duterte to intervene to “stabilize the situation in the Commission and thus, gain back its credibility and respect from stakeholders.” (READ: CHED in limbo after Duterte order to Licuanan)

“The recent events and circumstances would show, to my mind and to many of the CHED officials and staff I have talked to, that Dr Licuanan can no longer be effective in view of irreconcilable differences as well as her failure to tender her courtesy resignation which is tantamount to gross insubordination as mandated by MC 4, thus constituting serious grounds for the loss of trust and confidence in her as Cabinet secretary.”

While he did not name De Vera in his letter, Vitriolo asked the President to designate “the newly appointed commissioner to act as officer-in-charge” in the interim, pending the appointment of a regular chairperson.

For him, Duterte’s order to Licuanan is not only “tantamount to loss of trust and confidence” in Licuanan as the President’s “alter ego”, but it also means “removal from office arising form the nature of the position as a Cabinet member who serves at the pleasure of the President.”

He said the current situation indicates that Licuanan “might no longer possess the authority to govern the agency, thus usurping the authority and power of the CHED chairmanship and further putting the plans and program of the Duterte administration, the operations of the CHED as an agency, the welfare of its stakeholders as well as the use of government funds, in grave peril and prejudice.”

“Today, Mr President, we humbly pray that your good office will now intercede to protect the interest of the vast majority of the men and women of the CHED against the stubborn and recalcitrant self-interest of just one person, who is not even an elected official, and continues her refusal to obey your legitimate, fair and reasonable order with impunity and in disregard also of the time-honored principle of delicadeza,” the letter read.

Vitriolo said CHED will “again be in the mainstream” and concerns in higher education will be “amply addressed at the highest level of government” if the Commission will be represented in the Cabinet by the President’s appointee or designate. (READ: Duterte’s circle spreading ‘intrigues’ about fixed-term officials)

In his letter, Vitriolo also pointed out that Duterte has, so far, appointed only one commissioner to join CHED.

That appointee, Commissioner De Vera, is “the only one openly and aggressively pursuing” Duterte’s programs in the Commission, Vitriolo added.

He then asked that the appointment of 3 other commissioners “be made soonest” to assist whoever Duterte will appoint as CHED chairperson.

“May we request further, Mr President for your immediate action as this will be very vital in determining whether Dr Licuanan can still call for CHED officials or a National Directorate meeting scheduled this coming Monday and Tuesday, December 12-13, 2016. Hence, the urgency of our request Mr President so as to address the apparent leadership vacuum in CHED,” the letter read.

Vitriolo was in Malacañang on Thursday, December 8, to answer questions from media concerning the current situation in CHED.

He revealed back then that there is a “wait-and-see situation” in the Commission at present, and that they are waiting for “some kind of definitive action” from “higher authorities” or from the President, since CHED is an attached agency of the Office of the President.

On the same day, CHED came out with a statement signed by Licuanan pointing out that while the law provides the rank of Cabinet secretary to the chairperson, historically, the Commission has functioned effectively even without being part of the President’s Cabinet, as was the case during the time of presidents Fidel Ramos, Joseph Estrada, and Gloria Macapagal-Arroyo.

The statement reiterated that Licuanan will continue her work as CHED chairperson despite the President’s order.

Licuanan is an appointee of former president Benigno Aquino III. Her reappointment in 2014 means her term as CHED chairperson will not be over until 2018.

Republic Act 7722, or the law that created CHED, states that a chairperson shall hold office for a term of 4 years, without prejudice to one reappointment.

In explaining the “irreconcilable differences” between Licuanan and the President, Presidential Spokesman Ernesto Abella said the incumbent chairperson did not submit her courtesy resignation even after the issuance of the memorandum circular asking officials appointed by Aquino to resign.

Abella said the August 22 memorandum circular also applied to Licuanan even though she is a fixed-term official. – Rappler.com