Dec 12, 2016 11:39 AM PHT
Carmela Fonbuena
Facebook Twitter Copy URL
Copied
The National Democratic Front says they are amenable to signing the long delayed joint ceasefire deal but it will only be effective upon the releases of political prisoners 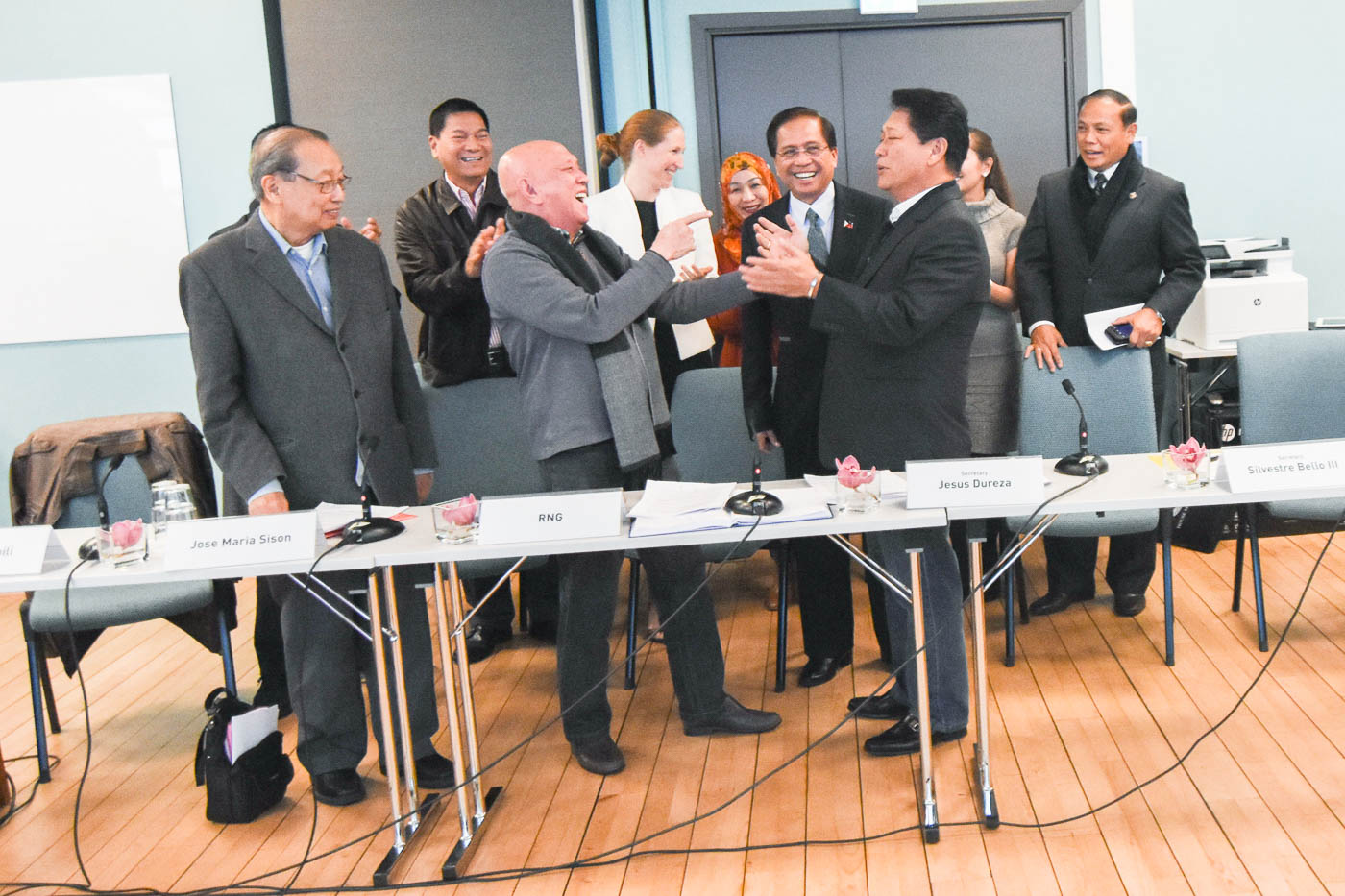 MANILA, Philippines – The Philippine government and the communist National Democratic Front (NDF) is closer to signing a crucial agreement that will preserve the ongoing ceasefire between the military and the New People’s Army (NPA).

“I welcome the statement of Mr. Luis Jalandoni on the readiness of the National Democratic Front to sign a bilateral ceasefire agreement with the government even before the release of the political prisoners,” Bello said in a statement Monday, December 12.

“Forging a bilateral ceasefire agreement is the best gift the government and the NDF can give to the Filipino people this holiday season. May this lead to the permanent end of hostilities for the new year leading to a just and lasting peace,” Bello added.

But Jalandoni said the effectivity of the bilateral ceasefire deal will be conditional to the releases of political prisoners. The NDF is holding on to the promise of President Rodrigo Duterte that political prisoners will be released 48 hours after the signing of the joint deal.

“We are willing to sign it even ahead, but of course he has to make a commitment and he has to implement it,” he told GMA News TV on Saturday, December 10, during the International Human Rights Day protest at the Liwasang Bonifacio in Manila.

Bello committed the release of a “substantial number of political prisoners.” A total of 21 prisoners were already released, including tagged Communist Party of the Philippines (CPP) chairman and New People’s Army (NPA) leader Benito Tiamzon, to allow them to attend the first round of talks in Oslo in August.

Four convicted prisoners were granted pardon recently. Duterte said he will release another 130 prisoners upon the signing of the bilateral ceasefire deal.

What is not clear is if the additional 130 releases would be enough for the NDF to make a signed bilateral ceasefire deal effective or they would wait for the release of all 400 prisoners.

The NDF is the political wing of the CPP. Its armed wing, the NPA, has been waging Asia’s longest running communist insurgency.

The resumption of peace talks with the communist rebels is one of the campaign promises of President Rodrigo Duterte. Formal talks resumed in Oslo in August and resulted in the historic and unprecedented unilateral ceasefire declarations from both the military and the NPA.

It was not easy for the NDF to agree to a ceasefire, afraid that a prolonged silencing of the guns could “amount to capitulation and mere pacification.” But it agreed to do so following the releases of its leaders. (READ: Oslo talks: ‘The most kind and most warm negotiators’)

The ceasefire also allowed the military to move its troops from areas where the NPA is present to focus its strength in fighting other threats such as terrorism in Mindanao.

The absence of common rules between the military and the NPA has made the situation on the ground difficult, however. Both camps have been complaining about each other’s activities. The NDF even floated a scenario where the peace talks will continue without a ceasefire agreement. (READ: Joint ceasefire deal urgent as NPA, military report complaints)

A bilateral ceasefire deal is a crucial document that will include, for example, the definition of hostile acts that both the military and the armed NPA will commit to avoid and set the areas that will be considered buffer zones.

It also aims to establish a body that will investigate potential ceasefire violations, similar to the Coordinating Committee on the Cessation of Hostilities (CCCH) that is monitoring the ceasefire between the military and the Moro Islamic Liberation Front.

The NDF had demanded the releases of the political prisoners from the beginning. Talks hit an impasse when NDF refused to sign the joint ceasefire deal prior to the releases.

But Duterte stood his ground, maintaining that he will not allow any more releases until the joint ceasefire deal is signed. (READ: Duterte on CPP talks: I conceded too much, too soon)

(“They want me to release 130 more political prisoners. I told them, ‘No, I cannot.’ As a matter of fact, I conceded too much, too soon. I said, ‘That’s my limit.’ Now, if it the talks are terminated, then whatever… But their leaders have already been released, they even went to Norway [for the peace talks] already. What more do you ask of us? I won’t have cards up my sleeve anymore if I keep approving the release of political prisoners.”)

However, Duterte reiterated his commitment to the talks and vowed to release the political prisoners.

His commitment to release the prisoners 48 hours after the signing of the joint ceasefire deal was the necessary element for both camps to reach a compromise. – Rappler.com